THOSE who have an extended family, a modest budget, a regard for solid engineering and a dislike for diesel should try this – the Volkswagen Touran SE 1.4 TSI 140bhp.

You can expect a no-frills-to-look-at people carrier that’s just been facelifted, child-resistant quality and build and an understated image to boot. What you actually get is a well-built, good-to-drive MPV that – in TSI guise – offers a genuine alternative to diesel in a sector dominated by oil burners.

TSI, Volkswagen’s latest petrol engine technology uses both a supercharger and a turbo to deliver strong bottom-end torque as well as high top-end power, with economy and low emissions thrown in. It really delivers the goods in the Touran and seems well suited to the task in hand. 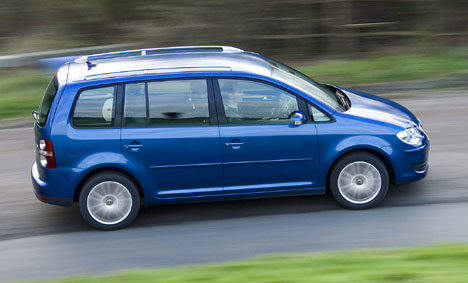 Despite the engine’s diminutive size – just 1.4 litres – there’s strong diesel-like urge low down and enough power for a decent turn of speed further up. With the six-speed gearbox, it makes the boxy Touran quite good fun to punt along quickly.

With its 140bhp, the Touran TSI’s top speed is 124mph, with 0-62mph achieved in 9.8secs – average for the class. The punchline, however, is combined consumption of an impressive 38.2mpg and CO2 emissions of just 176g/km.

Those emissions place the TSI just one BIK tax band higher than the 1.9 TDI (DPF) model, once the diesel’s 3% extra charge is taken into account. With its slightly lower P11D price (£18,047 for the TSI compared with £18,242 for the TDI) it means annual tax liability is neck and neck for the identical SE specification models.

There’s a near 10mpg fuel consumption advantage for the diesel, but with the price disparity between unleaded petrol and diesel fuel currently running at around 5p/litre – the difference in cost won’t be as much as you might think.

CAP Monitor’s predicted three-year/60,000-mile RV is about the same for either model at around 39% of cost new – better than most of the competition.

ALTHOUGH the Touran’s looks would never set the world on fire, it’s not bad to drive with its slick six-speed gearshift and refined ride in SE form.

Chief problems revolve around the heavy front quarter pillars which create a significant blindspot, particularly for shorter drivers. And while there is no doubting the quality of the interior, it’s pretty plain to look at with few of the ingenious storage solutions offered by, for example, the Renault Grand Scenic.

But the real revelation is the TSI engine which is smooth, refined, economical and punchy. It gives decent performance when needed, yet is unobtrusive at cruising speeds.

The Touran TSI is a genuine petrol alternative to a diesel, offering similar fuel costs, BIK tax liability and performance without the noise disadvantages. In seven-seat form, it’s ideally suited to the everyday business of family transport.