SO has all the hype, the marketing bluster and the bold claims worked? Is the C30 the first truly sporting Volvo, and is it the car to take the age of the average Volvo buyer plummeting?

Ultimately, the answer has to be no to the first part of the question, but yes to the second.

Certainly, the C30 has the looks to make it stand out on the road and, more importantly, in the company car park. For young user-choosers – target buyers are aged between 25 and 35 years old – it offers a refreshing alternative to an Audi A3 or BMW 1-series.

But, and there’s always a but, this car is really sensitive to colour and wheel choice.

Our test car, a D5 diesel in SE trim, looked undershod on its 17-inch alloy wheels and the bodywork seemed to fall away at the rear.

Having seen an SE Sport model, which comes with 18-inch alloys, rear spoiler and a bodykit with the option of the white and bronze colour scheme, as seen on the various show cars, the look makes sense. On our navy blue metallic test car, with black rubbing strips on the wheelarches, it doesn’t have that instant visual appeal. But at least it looks different I suppose.

In terms of being truly sporting, it’s a case of close but no cigar. With a chassis derived from the Ford Focus the ride and handling are impressive, with a flat stance and good level of bump suppression.

On motorway journeys the ride is supple enough to make this a realistic high-mileage car, while on twistier roads it feels planted to the Tarmac. 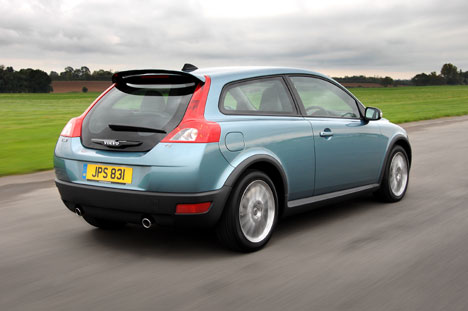 The steering is also much improved over other Volvo models. There’s none of that dreadful dead feel around the straight-ahead that you get on the S80 and the assistance is nowhere near as light.

While it’s not as entertaining to drive as a 1-series, it’s at least as good as an Audi A3.

Inside, the look is more successful with the floating centre console from the S40 dominating the dashboard area. Finished in a silver metallic trim it helps lift the rather sombre feel of the rest of the cabin.

Black is the theme inside, but at least the materials used are of good quality – the door plastics are solid while the main dashboard panel is a soft-touch affair which looks and feels very good.

Volvo expects most buyers to be either young professional couples without any children or older empty-nesters. That’s a good thing, because in the back there isn’t a lot of room. The C30 has two sculpted rear seats, making this a strict four-seater.

At least the boot is a decent size – it’s the most capacious of the four cars featured in this test with 364 litres of volume, although with the rear seats folded down it becomes the least spacious.

The C30 is a bold effort to muscle in on a sector dominated by the Germans, but how it stacks up financially will decide how successful it is in fleet.