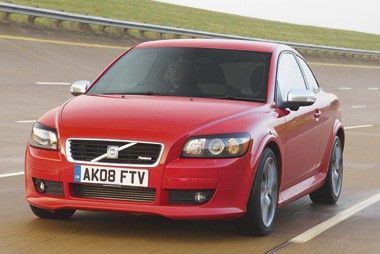 Perhaps not. Volvo is still, to an extent, tarnished by its traditional image when it comes to excitement.

The reputation for dependable, robust and safe cars is by no means a bad one, but they have rarely been cars to get the pulse racing. Who lusts after a Volvo?

But in this age of broadening ranges, things must change. Volvo can no longer rely solely on its established customer base – it needs to compete with rivals and widen its offering.

In recent years we’ve witnessed the arrival of new vehicle types, such as the XC90 SUV and the C30 hatchback.

And, now across the range, a sporty, dynamic option is offered.

The R-DESIGN trim level was launched as either an enhancement to or a replacement for, the Sport trim level.

On Sport and SE-level cars the R-DESIGN package adds sporty-styling inside and out.

The package includes a bodykit and spoiler and R-DESIGN badging, as well as a matt-silver finish on the grille and wing mirrors.

Inside, R-DESIGN-spec cars get two-tone black and cream upholstery with contrasting stitching and an embossed R-DESIGN logo, as well as a leather-trimmed steering wheel and an aluminium centre stack.

The instrument panel is a racy blue and the pedals go all aluminium and sporty.

The R-DESIGN trim is price-positioned just above the Sport and SE trim levels.

We tried the C30 SportCoupé first and, by gum, does the R-DESIGN kit make a difference.

The standard C30 is not an ugly car, but with a bodykit, spoiler and lashings of matt silver it looks fantastic.

The same can be said of the V50, which has its lines beefed up nicely by the kit.

The XC90 is a chunky car to start with, so the exterior additions are less immediately obvious, although it still looks good.

Inside, in the smaller cars the tricked-out upholstery and various flashy bits all work really well. In the C30, especially, you feel special no matter which engine is specified under the bonnet.

I’m not sure it works quite so well in the XC90, though.

A hulking great SUV is hardly a sound base for sporting pretensions, and the R-DESIGN features don’t sit quite so well within it.

Customers of larger Volvos would be better advised to head towards the luxury models instead.

On the smaller cars particularly, the R-DESIGN package really works well and adds a much-needed dose of sportiness to the brand and should help to attract more young people to its customer base.