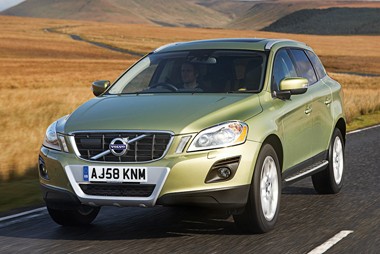 In the six years since the launch of the XC90, Volvo has established a strong footing in the SUV sector – the tall, boxy seven-seater putting in sterling service delivering children to private schools up and down the country.

Now there’s a smaller model in Volvo’s off-road line-up, which could well be a good thing if the fees are becoming more difficult and the price of an XC90 is beyond reach.

The XC60 is pitched at the BMW X3 and the new Audi Q5 in a sector which is a badge snob’s dream.

While Volvo might not be able to cut the mustard in other sectors (S80 or BMW 5 Series?), in this niche market it has gained acceptability and, more importantly, parity with the premium German marques.

So it is good to see that Volvo hasn’t got carried away with the pricing. In entry-level D5 diesel trim, it undercuts the equivalent Q5 and X3 by £4,000 (that’s a term’s school fees after all).
That doesn’t mean the XC60 is lacking in quality, performance or equipment, though.

Under the bonnet is the familiar 2.4-litre, five-cylinder diesel engine, which delivers 182bhp and 295lb-ft of torque.

In its many applications across the Volvo range, this unit can be noisy but in the XC60 it appears some extra sound-deadening material has been incorporated because it doesn’t intrude nearly as much.

The standard six-speed manual gearbox shifts cleanly and slots easily into gear to allow access to the next band of smooth, torquey acceleration.

The ride and handling is on a par for the sector, with a decent driving experience considering the physics which have to be defied with this sort of vehicle.

Inside is the cabin architecture which has been seen on the rest of the Volvo range, with silver-ringed instruments, the ‘floating’ centre console with neat and logical buttons, chunky leather steering wheel, but instead of the satellite navigation screen revolving from hidden on top of the dashboard it is now integrated into the fascia in the same way as on the Audi Q5.

It’s all neat, well built and with a quality feel, although in this sector that is a given.

One option included on our test car was the £1,164 Driver Support Pack which includes the BLIS blind spot system and lane departure warning.

Both very good ideas, but in practice their chimes and flashes of warnings become a little annoying after a while.

One system which is well worthwhile, and which is fitted as standard, is City Safety, a device which aims to avoid or mitigate accidents by engaging the brakes if the vehicle senses a crash is imminent. It won’t completely avoid an impact autonomously, but it is a handy thing to have.

The XC60 is a strong contender in this market, and it performs well in its current guise, but for the majority of drivers a forthcoming front-wheel drive-only model will be a much better bet.

Due to go on sale in the first half of this year, the new model will use a 2.4-litre diesel engine with 175bhp, CO2 emissions of under 170g/km and combined fuel economy of 41.4mpg.

The Audi and BMW are in entry-level trim, so a near-£30,000 price tag is as cheap as they come. The Volvo offers a useful £4,000 saving on them at the front end (and is the most powerful car here with 185bhp), while the Land Rover is cheaper still.

The Freelander offers drivers the lowest BIK bill of £227 a month for a 40% taxpayer – its low front-end price off-setting higher emissions (and this will improve when the lower CO2 Stop/Start model arrives in May). The BMW will cost £245, the Volvo £254 and the Audi £257.

Tyre costs for the BMW, Land Rover and Volvo will be similar as all three run on 17-inch alloy wheels. The Audi will be higher as it has 18-inch alloys as standard. The Q5 and X3 ofer variable servicing intervals, while the Land Rover has set 15,000-mile intervals and the Volvo 18,000-mile gaps.

The Volvo wins by £1,000 over a typical fleet lifecycle. It is the best for beating depreciation and offers the lowest SMR costs. The Freelander puts in a strong showing, and will be even better when the TD4_e Stop/Start version comes along in May with lower emissions.

Despite being very good cars, the Audi and BMW struggle to justify why they cost £4,000 more than the Volvo, and this is reflected in wholelife costs.

Those are compelling numbers, and result in the German duo being discounted. Which leaves the Land Rover and Volvo, both good cars but both set to be eclipsed by new additions to their respective ranges. As an all-round proposition, the Volvo wins for now, but canny fleet managers should hold off from ordering until the front-wheel drive XC60 and Stop/Start Freelander are launched in a few months’ time.