WE were full of praise for Volvo’s XC90 when we last road tested one, way back in 2003.

Since then, little has changed in the range and the XC90 has continued to win friends, especially among well-heeled drivers with a growing brood of children to transport around. It even impressed us enough to name it the Best SUV at the 2004 Fleet News Awards.

It’s only now that any serious changes have been made to the model since it arrived back in 2002.

There is now the choice of a new diesel engine, offering 185bhp and badged as D5 (unlike the previous D5 which only offered 163bhp).

This focus on diesel is understandable as 60% of XC90s sold are diesel-powered, and such is the size and weight of these type of cars that it’s the only viable fuel unless you really want to enjoy economy in the teens with a petrol model.

But it’s not just economy that is in diesel’s favour here. The mid-range torque really suits these cars, giving them enough urge to accelerate hard in the middle gears and shift along the bulk of a four-wheel drive SUV.

And with the new D5 engine, torque has risen from 250lb-ft to nearly 300 – a useful boost in the mid-range which answers one of our previous criticisms of the car – it just wasn’t powerful enough. Now it’s far lighter on its toes, if that’s possible for a near two-tonne car.

With the new D5 engine under its bonnet, the XC90 now accelerates from 0-62mph in 10.9 seconds – more than a second quicker than before.

This extra performance off the line is also helped by a revised four-wheel drive system which incorporates something called ‘Instant Traction’, which does exactly what it says on the tin and provides instant traction by apportioning drive to the wheels with the most grip.

There’s also a new six-speed manual transmission, which we’ve tried before in the new S60 D5, but for this type of car the six-speed Geartronic box is the one to go for, offering the ideal companion to the XC90’s power delivery.

There are a couple of downsides to this extra performance though. The first thing you notice is how noisy the engine is, settling into a loud idle and not getting much more subdued when on the move.

The ride is nothing to write home about either. The XC90 has a stiff set-up in a bid to tighten up road holding, but this means there’s little give in the suspension and a hard ride is the result. Ultimately, the XC90 cannot compete with the new Mercedes-Benz M-class and BMW X5 in terms of handling and refinement.

But it does offer seven seats, a quality interior and, more importantly, it also undercuts the two German models massively on price. 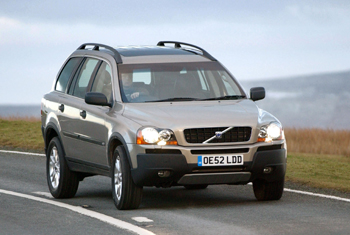