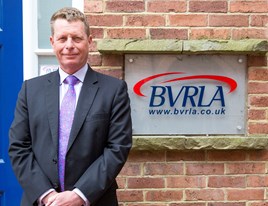 The British Vehicle Rental and Leasing Association (BVRLA) has announced Simon Oliphant as its new chairman.

He takes over from Marshall Leasing’s Peter Cakebread, who has stepped down after completing his two-year term.

Having worked for Hitachi Capital Vehicle Solutions for 25 years, Oliphant has been involved with the BVRLA since joining the leasing and fleet management committee in 2001.

He became chairman of the same committee after a decade, and joined the BVRLA’s committee of management in 2011.

Oliphant said said: “I am delighted with my new position at the BVRLA, which gives me the opportunity to put something back into the industry I have been associated with for more than 30 years.

“As chairman, my first priority is to ensure we continue the excellent work that has been overseen by Peter, Gerry and the BVRLA’s other committee members.”

“My career at Hitachi has given me the opportunity to work with small, medium and large companies in different roles. This makes me ideally placed to work with all BVRLA members and fully represent its diverse membership, which continues to grow across each sector.”

He has already identified some priorities in his new position. “I’d like to develop stronger relationships with the newly-formed government around key issues such as taxation, safety, the environment and technology, enhancing the BVRLA’s authoritative voice.

“I am also passionate about training and development, and would like to see the BVRLA play a bigger role in this.”

As BVRLA chairman, he is responsible for leading the BVRLA committee of management - in effect its board of directors - which has also seen two members gain additional responsibilities.

Brian Swallow, vice president of rental at Enterprise Rent-A-Car, has been appointed chairman of the rental committee.

Making way for this pair are Robert Shaw of Europcar and Keith Allen of ARI fleet UK. Both will remain a part of their respective committees as vice chair.

Elsewhere in the BVRLA, Mike Potter of Fleet Drive has replaced PHVC’s Paul Huxford as chairman of the association’s leasing broker committee.

“It is great to welcome these new faces to the association, because we certainly have some challenges for them to focus on,” said BVRLA chief executive Gerry Keaney.

“We are also grateful to outgoing committee members whose efforts have helped steer the BVRLA in recent years.”