Government to work with BVRLA over UK's major transport issues 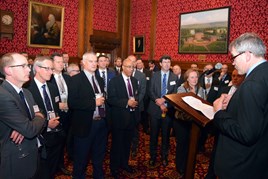 The Government has told BVRLA members that it will work with the vehicle rental and leasing sector to find solutions to the UK's major transport issues.

Gerry Keaney, chief executive of the BVRLA, presented transport minister Robert Goodwill and other MPs with the industry’s policy recommendations at a parliamentary reception in the House of Commons on Wednesday evening.

Keaney highlighted the association’s six main recommendations, which called on the Government to:

Many of these points were also made in the Fleet Industry Manifesto, produced by Fleet News, BVRLA and ACFO, which was presented to the major policitical parties ahead of this year's General Election.

Responding directly to these recommendations, Goodwill said: ”I am very grateful to the BVRLA for organising the discussions which have culminated in this evening’s reception.

"There really is no substitute for getting the experts around a table and thrashing out some good ideas.

“As you recognise in your recommendations, governments can make a difference not just through passing new laws or imposing new taxes, but by setting an example and raising awareness - whether of air quality or new car technology.

"And as we look at how far the vehicle manufacturing industry has come in the last few decades, we must also recognise that pioneering fleet managers in the private sector have been great agents of change."

The Government has since announced it will continue to support a revised version of the plug-in car grant.

Commenting on this news, Keaney said: ““We are delighted that the Government has addressed this issue, which has been one of our key policy priorities during 2015.

"This common-sense decision gives rental and leasing companies the confidence they need to continue leading the uptake of ultra-low emission vehicles.”

He added: “We look forward to working with the relevant Government departments to ensure our contributors’ input is given proper consideration.

"Acting upon these recommendations would have a major impact in terms of reducing congestion, emissions and accidents while promoting the take-up of new, safe and sustainable transport.”

In attendance at the Parliamentary reception were the transport representatives from each of the three main political parties in government, plus representatives from the Transport Select Committee. In all, over 20 MPs joined a host of BVRLA members and fleet end users.

Early next year, the BVRLA will place detailed policy papers with Government Ministers, senior departmental advisors and other key stakeholders.

These will form the basis for further meetings between the BVRLA and Government officials throughout 2016.