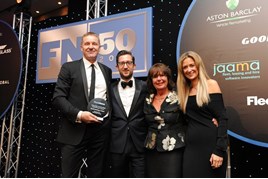 At the FN50 dinner on Tuesday last week, he received the John Leigh Outstanding Achievement Award in recognition of his work with the Government to clarify the tax position of car salary sacrifice schemes.

Hosking said: “I’m thrilled to have received these awards which recognise all the work that everyone at Tusker has done to help secure the future of salary sacrifice car schemes.

"I’m also delighted to see that Tusker has moved up the FN50 ranking to 13th in recognition of our growth and success this last year. Now that we have certainty on the legislation and salary sacrifice for cars can continue, the future is looking brighter than ever.”

Following a Government announcement opening consultation into salary sacrifice in summer last year, Tusker lobbied to protect the car industry from drastic legislative changes. Hosking was integral to this, holding more than 65 meetings with ministers and Government advisors.

The original proposals put forward in the Government’s consultation would have had a significant impact on the industry, removing many of the tax efficiencies enjoyed on salary sacrifice cars, particularly for ultra low emitting vehicles (ULEVs).

Hosking campaigned for a different treatment for all cars, including ULEVs, which would align them with other protected benefits, including childcare vouchers and Cycle to Work schemes.

He was successful. In April 2017, new rules were put in place for a number of other salary sacrifice products, however, cars were treated differently.

Most recently, in September 2017, following clarification on the legislation, Tusker was able to announce that the tax changes brought in during the Finance Act in April, were in fact, significantly less impactful than many thought.