Medium-term leasing is the flexible solution 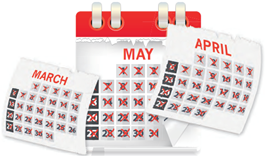 Companies operating in industries where there is traditionally high churn, those taking on people to do project work and organisations wanting to give employees on probation a vehicle before their position is confirmed (or isn’t) need a lease that fulfils a short-term requirement: enter the mini- or medium-term lease.

Mini-leases typically allow a vehicle to be hired from 28 days to a year (although longer hire periods are possible) and can cost 20% to 50% less than a daily rental vehicle.

Rental companies, such as Enterprise Rent-a-Car with its Month or More product, and specialist providers have traditionally offered mid-term rental, but more and more contract hire and leasing companies are adding it to their services to meet growing demand.

In January this year, Arval launched its mid-term rental product, which leases vehicles from one to 24 months and acts as a bridge between short-term rental (one day to one month) and contract hire (from 24 months).

In four months, it has grown to more than 100 customers operating more than 400 vehicles. “Customers know they will receive quality, well maintained vehicles,” says Gary Burns, Arval head of mid-term rental. “Car emissions are always sub-130g/km, they have high specification and good fuel consumption. They are fitted as standard with Bluetooth, rear parking sensors and the majority have sat-navs.”

The fleet ranges from supermini to premium executive, plus vans. Customers choose the category, Arval chooses the rest.

Burns says mid-term rental shows savings of at least 20% over short-term rental. Some providers report a 15% to 20% growth in demand over the past year. Demand is partly being driven by economic uncertainty with some companies choosing a mini-lease rather than being tied into a contract hire agreement.

“Although confidence is on the up, some businesses remain cautious about committing to a three- or four-year contract hire agreement,” says Ian Drayton, senior manager in car and van rental at Lex Autolease. “This has led to greater demand for mini-lease vehicles for companies across a range of sectors. We have around 3,000 of these on hire every day and this is growing.”

On the flipside, businesses that are performing well and winning new contracts are also turning to mini-leases.

Oliver Boots, head of product services at LeasePlan, says: “Demand is growing and we are being tasked to respond more and more quickly because customers are winning bigger contracts and need to mobilise more people quickly.”

He points out that with a mini-lease an employee can be on the road in a few days, they do not have to wait for manufacturers’ lead times.

Lex Autolease says that it can provide vehicles with guaranteed low mileage, petrol or diesel engine within five working days or sooner if fuel type is not a priority.

“Opting to rent cars and vans on a mini-lease basis is a simple and convenient solution to seasonal business changes such as Christmas and bank holidays, and also medium-term changes to the size of a business’s work force,” says Drayton.

Public sector fleets also find mini-leases useful. Alphabet points out that public sector bodies are often under annual budgetary restrictions that do not allow them to commit to a traditional contract hire.