New research suggests that fleets’ approach to vehicle funding methods is becoming highly volatile, with a high proportion of companies planning to change the way they finance their company cars in the next 12 months.

The Fleet Market Report 2018, by Sewells Research & Insight, found that 39% of car fleets intend to make changes to their main funding method this year. Among the various types of car funding, finance lease appears most vulnerable, with more than half (56%) of fleets that currently use this as their primary funding method intending to change.

A similarly high proportion (49%) of fleets that use either contract hire or hire purchase to fund their cars are also looking to affect changes in 2018. This falls to just over a third (35%) of fleets that purchase outright.

The study did not pursue which funding methods will prove to be the most popular destinations, but it did identify potential reasons.

One major influencing factor is the rise in company acquisitions or mergers. Around 20% of fleets said their business had been affected by such activity, double the number from a year ago.

Of those, 41% said this would impact the way in which their fleet was funded – most likely as a consequence of projects to standardise their approach across their various business units.

Brexit is also having an impact, with 8% of fleets saying this was influencing changes to their funding methods, while 7% said legislation was a factor.

The study, based on detailed work with more than 600 fleets, found a strong correlation between fleet size and propensity to change funding methods.

The larger the fleet, the more likely it is to be considering adjustments, with 60% of 50+ car fleets intending to make changes, compared to 31% of businesses running one to five cars.

Some of this may be down to the fact that larger companies are more likely to operate multi-funding methods, mixing contract hire with outright purchasing and, in some cases, salary sacrifice or finance lease.

While 20% of small fleets use more than one funding method for cars, the percentage rose to 41% for larger fleets. Changes to main funding methods could, therefore, refer to shifting the balance between different existing methods used rather than switching wholesale from one method to another. 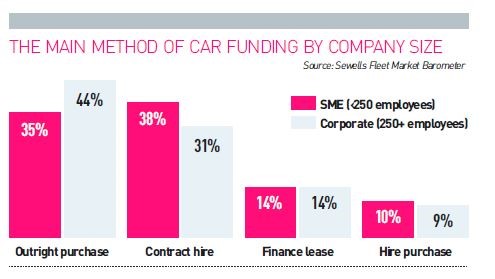 Currently, 52% of fleets outright purchase some of their company cars, 37% fund some through contract hire, 19% use finance leasing and 15% hire purchase. Personal contracts, typically where drivers use a cash allowance to finance their company car, achieve just a 3% presence.

The Sewells research identified variations in the likelihood of changing funding methods among industry sectors, with 70% of public sector fleets intending to change, compared to 42% of fleets in the construction and manufacturing industries, and 34% of business service fleets.

As austerity maintains its vice-like grip on public sector finances, the need to save every pound and penny remains a weighty pressure.

For some, this will mean extending vehicle holding periods; for others, a move from the capital outlay of acquiring new vehicles to the cash-flow benefits of lease arrangements.

Further changes to the constituency of car fleets are in the pipeline as companies get to grip with the implications of the new vehicle emission testing regime.

The  tax implications of the move from the New European Driving Cycle (NEDC) to the more realistic Worldwide harmonised Light vehicle Test Procedure (WLTP), is unclear during the transitional phase until 2020/21, but larger fleets are anticipating an increase of 15-20% in officially recorded CO2 emissions, which could have a profound effect on tax liabilities and corporate environmental commitments.

The increase in officially recorded figures also raises sensitive issues for organisations that operate a CO2 cap on their company car choice lists.

“Without careful consideration drivers could see their car entitlement drop by one or two bands unless employers relax the cap,” said the Sewells report.

It found that 18% of fleets are already planning to increase their CO2 ceiling, rising to 38% for larger companies, an indication that bigger organisations are more atune to the potential impacts on their employees’ choices.

The move to WLTP for CO2 emissions is also prompting almost 30% of fleets to review and change the types of fuel available on their choice list, while one-in-five anticipate a move away from certain manufacturer brands.

Alternatively-fuelled vehicles, primarily hybrids and electric cars, stand to be the main beneficiaries. However, there is a disconnect between fleet rhetoric and action, with voiced enthusiasm for cleaner emission vehicles not reflected in actual fleet sales.

Currently, just 12% of companies have hybrids on their fleets, and 3% have electric cars.

Looking ahead, 30% of fleets expect hybrid vehicles to be among their acquisitions in the coming year, and 7% forecast electric vehicles joining their operations.

“Corporate companies have a significantly greater appetite for alternative-fuel vehicles (AFVs) than SMEs, as do fleets that contract hire their cars,” said the report.

This suggests that fleets are more willing to experiment with AFVs when they are not carrying residual value risks. Diesel does, however, still dominate fleet purchasing plans, with 59% of fleets expecting to add them to their operations in 2018, and 50% intending to source petrol models.

The anticipation of Brexit is having a widely varying impact on UK fleets, according to the Fleet Market Report by Sewells Research & Insight.

It found that 57% of companies forecast no change to their business due to Brexit, but others are braced for changes that will have a direct impact on their fleet operations.

Overall, 18% of the 600-plus companies surveyed forecast a reduction in turnover when the UK leaves the European Union, and this will lead to 13% of businesses implementing a recruitment freeze, while 10% will slow down the recruitment of fixed-cost personnel.

Only 5% of companies foresee Brexit bringing increased turnover and recruitment.

In broad brush terms, the larger a fleet the more sensitive it is to Brexit, with 65% of businesses running at least 50 company cars predicting a negative outcome from Brexit, compared to 60% of fleets with 25 or fewer company cars.

This is already having an impact on fleet buying decisions – “one in five has put new orders on hold, and 16% are conducting a formal review of suppliers,” said the report.

In addition, 10% of fleets expect to see their vehicle numbers decline, and 15% forecast a move away from certain marques.

Until the terms of the future trading arrangement between the UK and EU are negotiated, fleets are unable to assess two of the key cost impacts of Brexit: in a worst case scenario, the Society of Motor Manufacturers and Traders has warned that import tariffs could drive up the list price of new cars by £1,500, and add 10% to the cost of car servicing and maintenance due to tariffs on imported replacement parts.

Some industries are, however, more sensitive than others – heavy industry and utilities have been swift to implement a hold on new orders, while insurance, accounting and the IT sectors appear largely unaffected.

£766,000 of funding awarded to London councils to accelerate transition to EVs

Three London boroughs have been awarded a total of £766,000 to help accelerate the switch to zero emission vehicles to tackle air pollution.