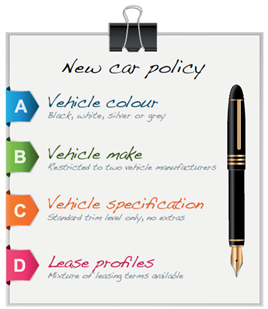 Restricting vehicle colour choice or specification are among the options fleets can take to make future reallocation simpler.

Whether it is through right-sizing a fleet or staff leaving, companies can often be left with excess vehicles. So, what does a fleet manager do next?

“They’ll need to decide what to do with these unused or unallocated vehicles in order to keep utilisation high,” says Wayne Millward, fleet consultant at Arval UK.

“Options include early termination of leasing contracts, reallocating vehicles to new starters or other employees, and use as pool cars. The latter option is an attractive one, but it is worth bearing in mind that pool cars can be admin-heavy, with the managing of the diary, checking in and out, fine management and more.”

While returning a vehicle to a leasing company before its contract runs out will prevent an excess of vehicles, the cost of doing this can be high.

GE Capital (see case study, below) had a policy where if an employee left, their car was automatically terminated early. Over a two-year period, this cost the company £1 million.

Fleets which outright purchase vehicles face a different scenario. Although there are no early-termination charges with leasing companies, they have to consider whether it is financially prudent to dispose of a vehicle partway through its replacement cycle, or whether to reallocate it.

Before defleeting a car or van, fleet managers should also consider how many drivers require a vehicle, whether any new employees are starting in the near future and if it can be used to replace any short-term hire cars. Any of these mean a vehicle could be reallocated to another staff member instead of being returned or sold.

“This avoids having to place a new vehicle order for a new employee and avoids any daily rental costs incurred while waiting for the delivery of a new vehicle,” says a spokesman for Pendragon Vehicle Management.

Reallocating vehicles has numerous other benefits. It can reduce costs and admin, while redistributing cars or vans between high-mileage and low-mileage drivers can also help prevent end-of-contract excess mileage charges.

However, there is the potential of upsetting a driver by either giving them a used vehicle when they would prefer a new model, or offering them a car they do not like.

“Some cars are easily reallocated but there is always the odd vehicle that proves a challenge because of issues such as make, model, extras, colour, CO2 and list price,” says Millward.

“One way of solving this is to offer an incentive for taking the car – whether financial or otherwise – but this has to be balanced against the cost of early termination.”

Enserve Group had experienced problems reallocating some vehicles due to their specifications, and has introduced a policy to avoid this.

“We’ve limited the cars to what we define as ‘business colours’, which are black, white, silver and grey because we were constantly getting a car back that somebody had ordered, for example, in lime green with leather seats and bits and pieces,” says Paul Brown, fleet manager at Enserve Group.

“Trying to move that car on to a manager was really difficult, so we just decided to keep it to business colours that don’t offend anybody.”

The change in policy followed a review of Enserve Group’s company car scheme, which focused on brands, emissions and vehicle utilisation.

“There are always roles within the business where the vehicle will be a perk car and part of the terms and conditions of the job, but the majority of our cars are run by mobile and commissioning engineers,” says Brown.

“We looked at what cars were needed and they needed an estate car, something mid-range and then we looked at the emissions of those vehicles, the fuel usage and the P11D prices. We went out to tender in early 2014 and decided that instead of having various choices, we would pick one brand.”

Enserve Group opted for Volkswagen and Brown says that all the cars are standard specification with no optional extras, which also makes it easier to reallocate them if necessary.

“We take the top-spec car anyway, so they’ve already got everything in: there’s not really anything else you can add on there,” he adds.

Fleets can also minimise the amount of excess vehicles they have by adopting a mix of lease profiles, says Millward.

“Staff attrition is always a consideration when looking at lease profiles,” he adds. “A blend of different terms or a small amount of mid-term rental will allow a level of flexibility to cope with reorganisation and restructuring without having to face high levels of termination.”

This is an approach taken by GE Capital, which replaced its standard four-year cycle by offering staff the choice of keeping cars for two, three or four years. Staff have to pay more for the shorter cycles.

Most (70%) have continued to opt for four years since the harmonised policy was launched, 14% have opted for three-year leases and 16% for the two-year lease, demonstrating that some are willing to pay a bit extra to replace their car earlier.

GE’s calculations show that there is not a huge difference between the different operating cycles; its fleet manager Damion Bennett changes his own company car at three years instead of four and says the monthly increase equates to around £40.

GE Capital has saved around £1.4 million following the introduction of a reallocation policy in September 2014.

Previously, if someone left the business, cars were automatically terminated early.

Now if someone leaves, vehicle management and logistics supplier SMH Fleet Solutions collects the car for inspection and cleaning, and repairs it to BVRLA fair wear and tear standards. Then it is delivered to a new employee.

“Since we went live with this, we have saved £1.4 million from early termination and rental costs,” says fleet manager Damion Bennett.

“Now, no cars are early-terminated unless is it cheaper to send the car back.”

He says he anticipated some resistance to the reallocation policy from parts of the business where the car is used to attract staff, but discovered that the initiative was actually well received.

“We have mitigated any problems by working with business leaders and car populations to understand their issues and what they need from me to make the running of the fleet easier,” he adds.

“We pilot new ideas with a group of drivers for testing so they can flag any issues before they go live.

“We try to find the most difficult drivers to get their buy-in and they can take the positive message out to the business.”

The reallocation policy required GE to impose a number of restrictions. It does not allow ‘extreme colours’, such as brown, lime green and yellow, or light interiors which show their age more quickly. Also prohibited are two- and three-door models at job-need level.

“We need cars that are easier to reallocate if an employee leaves – that’s certainly an important consideration,” Bennett adds.