Balfour Beatty: ‘It gave us licence to get under the skin of our operations’ 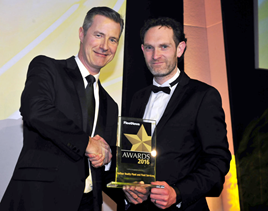 Innovation is key to long-term business success and companies that fail to change and adapt put future growth aspirations at risk and perhaps, ultimately, fall into long-term decline.

Chief executive Leo Quinn, who was appointed in January 2015, challenged each of Balfour Beatty’s business units to develop their own Build to Last programme. For Balfour Beatty Plant and Fleet Services that meant an agenda to drive change focused around fleet efficiency innovation.

Such an approach was not a leap into the dark for Balfour Beatty Plant and Fleet Services as it has a history of constantly introducing new initiatives – many of them award-winning such as Permit to Drive, which secured the Fleet News Awards 2015 Safe Fleet of the Year accolade.

However, as fleet director Carl Hanson explains: “The Build to Last programme gave us licence to get further under the skin of our day-to-day operations and really drive improvements and efficiencies across the fleet.”

In 2015 financial savings totalling 6% of the total fleet costs (including overheads, fuel, vehicles and technology) were identified across the four business areas in terms of fleet operations.

Throughout the year, Balfour Beatty Plant and Fleet Services ‘kept score’ and updated the business monthly on progress.

Savings and improvements have continued in 2016 with the Build to Last programme further evolving and Hanson explaining: “Change is constant so we are
continually reviewing and adapting the business to meet our customers’ requirements. That means more
innovation and greater use of technology to deliver further significant savings.”

He continues: “The Build to Last transformation programme demonstrates involvement and buy-in across the organisation from the group chief executive through to individual drivers working on our operations every day. The results yielded to date highlight direct, significant cost savings as well as unlocking many other benefits to the business.”

Fleet News: What did you focus on to achieve savings across the four target areas?

Carl Hanson: The principal aims were to obtain reductions in fleet and fuel spend through vehicle standardisation and effective supply chain management. As well as operating fuel efficient vehicles, we wanted to deliver fuel savings at a driver level by changing driver behaviour and maximising deals available through our fuel card supply partner.

FN: How did you convince business divisions that the new approach was the right approach?

CH: We had to show operating units how they could be lean and efficient with the resources they used day to day such as vehicles, fuel and drivers by managing changes to attitudes and behaviours. We worked with business unit leaders and took them on a journey of change to gain their approval, enabling Plant and Fleet Services to support their teams at individual contract/depot level, delivering lasting efficiency and sustainability. That required unit business leaders to recognise that by investing the time up front to improve fleet performance, they would see quick wins and medium to long-term improvements – and financial savings – across their respective fleet operations.

FN: What specific actions did you take to deliver savings in the four target areas?

CH: They were many and varied. In terms of procurement, following the 2014 decision to outsource the supply and management of Balfour Beatty’s car and van fleet to Lex Autolease we identified further savings by standardising our commercial fleet and rationalising our supplier base.

We have reduced the fleet mix to nine standard light commercial vehicle types and 14 specifications and a revised vehicle standard with greater consistency to improve utilisation, enabling vans to be moved across units to meet individual contract demands. We moved away from individual operating units having their own ‘favourite’ vans and specifications. In terms of the car choice we review, with Lex, vehicle price and CO2 emission levels four times a year so as new models are launched we continually drive down fleet emissions and improve fuel efficiency.

FN: What action have you taken to reduce fuel costs?

CH: Key to fuel management improvements has been the rollout of 6,500 new discount diesel fuel cards, along with educational packs to encourage more effective usage. As part of the programme we recruited a fuel card co-ordinator to support the targeted fuel spend behaviour improvements across all cards and introduce the new policy. Previously, there were individuals across different parts of the business involved in the fuel card process with differing management approaches. Drivers are supported through a number of communication channels including a mobile app and fuel station mapping. Monthly reports highlight improvements and identify lost opportunities for savings to continually drive further fleet efficiency and greater vehicle utilisation.

CH: Our fleet efficiency drive has also complemented our long-established focus on road safety. We established a project team to review existing data and conduct strategic ‘deep dives’ into the fleet operations relating to individual depots and contracts to drive changes where we could identify savings.

One contract example saw the removal of three vehicles, drivers re-assigned to more suitable vehicles and, due to the use of telematics, a 75% reduction in speeding instances, an 84% cut in engine idling and a 45% mpg improvements with spin-off CO2 improvements to help meet Balfour Beatty’s environmental improvement targets. A further initiative saw a concerted focus on the efficient use and management of short-term hire vehicles. Additionally, in-house speed awareness courses were introduced, reducing speeding instances by 54% over a 14-week period in one division as well as improved mpg.

FN: How do you ensure that the momentum created by Build to Last is maintained?

CH: Weekly KPI reports are produced so business units can track progress and see future opportunities for savings and weekly conference calls are hosted to discuss the outcomes and actions required. On-going reporting following the initial transformation stage is critical to ensure that improvements and efficiencies are maintained over time and become the norm. Management information packs are generated monthly and sent to senior stakeholders in each business unit. They are designed to grab the attention of senior management and allow them to identify positive or negative trends in their fleet and act accordingly.

FN: What are the long-term benefits of Build to Last in addition to financial savings?

CH: Plant and Fleet Services has forged much stronger relationships with operational teams, through increased dialogue and a greater appreciation of the importance that a more efficient fleet can provide. By going the extra mile for our colleagues we are achieving much deeper mutual and durable relationships which are built to last.

FN: What does winning a Fleet News Award mean to you personally and the business?

CH: I was very proud to win an industry award for the work we have done. It is a thank-you to everyone who has been involved in delivering the savings and improvements.