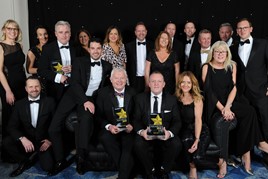 Rob East is no stranger to receiving trophies at the Fleet News Awards.

At last year’s event, he went on stage to collect the fleet manufacturer of the year award for Mercedes-Benz, where he was head of fleet.

This year, he was back to collect the reader-voted award again – this time for his new employer BMW, three months after his appointment as general manager, corporate sales.

It was the second trophy East collected, with the BMW 5 Series retaining the best executive car.

However, East rebuffed any light-hearted suggestion that BMW’s awards success could be attributed to his appointment, instead saying it was an exciting time to join the company.

“Since I’ve been here I’ve been astonished by the quality of the product,” he added. “Looking at the brand from afar, I had limited historic exposure to it so when you hear as an outsider about the
‘ultimate driving machine’, that’s quite intangible.

“But when you live with the product, you recognise how sensationally designed it is, whether it’s from a dynamics perspective, practicality, infotainment: I’ve really been blown away by it.

“This is going to be a really positive time for us. This year is particularly busy and active, as throughout 2019 we’ve got 18 model launches and by the end of the year our product range will be the youngest across the premium sector.”

New launches include the new 3 Series – “from a corporate perspective, an iconic car” – including a 330e plug-in hybrid version, as well as 1 Series, X5 plug-in hybrid, Z4, 8 Series, and X7, while revised models include the i3 and 7 Series. Further ahead, BMW plans to have 25 electrified models by 2025.

While these new products will have a massive role to play in the brand’s future, East is also focused on other measures aimed at improving performance in the corporate sector.

Fleet News: What is your priority at BMW?

Rob East: We are developing an updated strategy very much to maximise growth. We’ve got some great customer relationships and have a very strong channel performance in fleet across the various subsets, but there is more we can do.

For me, it’s very much about how we differentiate what we do over and above the competition and how we continue to fight and punch above our weight in the corporate channel.

For us as a group, it is about sustainable channel management. In the first two months of the year we grew in customer channels against our competitors and we want to reduce our non-customer channels, such as demonstrator, rental and internal fleet volume. We take channel management very seriously and it is about creating profitable growth for our retailers as well as the effect it has in terms of residual value management. This is a clear objective for us as we move into 2019 and beyond. (In the first three months of 2019, BMW registrations in rental dropped 9.5% year-on-year, with fleet captive sales falling 19.3%.)

FN: How do you incorporate Mini into the BMW fleet offering?

RE: We’ve made a fundamental change this year. Historically, the team looking after corporate sales for Mini was separate from BMW’s, but, as of the start of this year, my team looks after both brands. It allows us to take much more of a group approach to corporate sales.

We can now talk to the market with one voice, which is a really positive step. There is a lot of natural interest in Mini, but it just makes sense that we go out there and talk to the fleet marketplace, whether it is end-users or fleet managers, with one voice. Mini is an integral part of the BMW Group, so it is also about making it much simpler for customers to deal with us.

It is fair to say that, historically, we were a little disjointed, but we will be looking to rectify that. Mini has never had a stronger and more corporate-relevant range of products.

FN: The fully-electric Mini will be launched next year, but until then what will be the main focus for the brand?

RE: This year is about making the experience of buying a Mini much simpler, so there is now a five-step process. We can go back to the early days of the Chilli Pack, Pepper Pack and various other packs and I think it is fair to say customers often had some challenges making sense of it.

It’s now very straightforward: you first pick your model, you then choose the desired level of performance, then the style, then packs and finally any bespoke options. That’s a great example of us looking to simplify the customer journey. It’s about reducing option complexity, and now we can make sure that where there are packs they can be coded correctly so you get the residual value effect.

FN: Does this desire for simplification stretch across to the BMW brand?

RE: One area I’ve challenged my team around is simplification. I think there are certain points of our approach to the market where, with the benefit of objectivity, we make it relatively complex for customers, so at every point we need to be challenging ourselves to simplify the customer journey. How do we simplify how we communicate? How do we simplify our channel management to our retailers? That’s very much work in progress, but that’s an area we will be focusing on.

FN: Are you concerned about people opting out of company cars?

RE: I don’t see the death of the company car; the top end corporate customer remains committed. Drivers want options, but opting out isn’t a panacea. We are trying to see how we can support the market by engaging with companies that have an opt-out policy.

We are also modelling the like-for-like cost of a company car versus the retail market.

FN: How are you supporting those companies?

RE: From a national sales company perspective, we have an opportunity to understand an organisation’s objectives in broader terms. It used to be about fleet policy and optimising the number of models on their fleet; now it’s about their commercial strategy and how they will develop and grow so we can support them.

Several times during the interview, East refers to corporate mobility as a rapidly changing sector, with BMW determined to take a leading role.

One of these initiatives is a joint mobility venture with Daimler, which will focus on developing autonomous technology, as well as a free-floating car-sharing service which brings the brands’ DriveNow and Car2go initiatives under one roof.

“Around 10 to 15 years ago, partnering like this with a rival would have been unheard of, but it made sense to leverage our scale,” says East.

“You’ve now got some real focus between two strong automotive brands and it’s about harnessing the innovation and thought processes that go through that.

“Our clear roadmap is to have 25 electrified models by 2025 so, again, the breadth and the speed of change, certainly from a product perspective, shows no sign of slowing down.

“We’ve got every right to be excited and, indeed, optimistic for the future.”

Best executive car: By far the best driver’s car in this category, the 5 Series also has competitive running costs and low CO2 emissions. With a strong range of engines and drivetrain, it’s the executive car that everyone wants.

Fleet manufacturer of the year: An ever-expanding model range has given BMW a car to compete in almost every segment. It continues to offer improved performance and reduced emissions across its ranges, with no adverse effect on drivability. Attractive BIK and running costs help keep BMW at the top of choice lists.

BMW has unveiled its new 1-Series, which will go on sale from September priced from £24,430.