Hot on the heels of being bought by leading Irish bank, Marshall Leasing gained access to funding at attractive, stable rates. By Sarah Tooze

Marshall Leasing has grown its funded fleet by 15% (from 6,470 to 7,400) since the last FN50 despite undergoing what managing director Peter Cakebread calls a “fairly significant integration process” after being acquired by Bank of Ireland UK last year.

The challenge, says Cakebread, has been “trying to align with Bank of Ireland policies and procedures” while at the same time “looking to retain the unique flavour of Marshall Leasing”.

“I think we’ve been successful in both of those,” he says.

Marshall Leasing’s ‘unique flavour’ is its approach to customer service. On average, staff have been with the company 14 years while Cakebread has been at the helm for 27, which, he says, “creates a consistency of approach.”

He believes winning the Fleet News Award is “testament to what is quite a tight knit and small team”.

“We’ve been close (to winning) a couple of years before that which is great, but somehow a little frustrating. Clearly, it’s the most recognised awards in the industry and we feel very proud of it,” he says.

“It couldn’t have come at a better time having just been acquired by Bank of Ireland.”

Cakebread says Northridge Finance is also “customer centric” and the cultural fit has been one of the “real strengths” of the acquisition.

Cakebread won’t put a number on the amount of PCH business he anticipates as it’s early days (the product launched a few months ago) but says he sees it as “a driver for growth”.

“With the changes involving WLTP and various other things, there could be a move away from company cars for certain users and if they move into cash we can offer them a really good alternative in terms of PCH.” 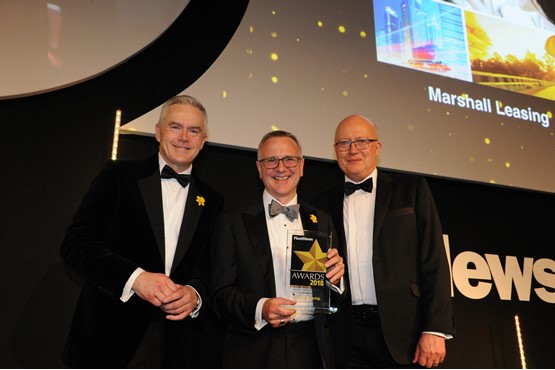 Fleet News: Is there likely to be a rebrand at some point?

Peter Cakebread: I think we recognise the strength of the Marshall Leasing name and it has got a lot of reputational strength. There are no immediate or medium-term plans as far as I can see to change that name.

FN: Will there be changes to the team or office location?

PC: We’re very keen to retain the team because the team is, essentially, what Bank of Ireland bought.

It bought the functioning team with an associated client base so we’re keen to keep the team together and Huntingdon is the home of the business. As we grow, we’ll have to take on staff.

FN: How much growth are you forecasting?

PC: We’re looking to continue our current growth rate and possibly see a little acceleration. But then we’ve got PCH and the potential for affinity schemes as additional areas to concentrate on.

FN: As you continue to grow, how will you ensure you retain your customer service approach?

That is the challenge, but it’s always been the challenge and we’ve ridden that from a point where we had 2,500 vehicles to one where we’ve got 7,500.

FN: Have there been any changes to the way you acquire and dispose of vehicles now that you’re no longer owned by a dealer group?

PC: The relationship (with Marshall Motor Group) is still a strong one so we haven’t put any changes in place.

We’re still buying the vast majority of our vehicles from Marshall dealerships where they hold the franchise and there has been no change to our disposal procedures, which we always handled independently. We sell via auction, via trade and via dealership, and we also sell to the drivers.

PC: Yes, I think our core is going to remain similar because that’s where we can deliver a real value-added proposition. But we’ve never been scared of larger fleets and we have a couple on the roster of 1,000-plus.

FN: Why did you decide to start doing minibus leasing in 2016 and how successful has it been?

PC: We saw it as a natural adjacent market to our mainstream and something where we could bring our tried and trusted customer service and handholding expertise to play.

We developed a comprehensive product which makes life easy for schools to have access to a fully maintained, fully serviced minibus at what we believe to be a good value point.

We’ve got a couple of specialist people who deal with it exclusively. In 2016, we were building the product line; in 2017 we saw some results from that and we started to get a toehold. So far, 2018 has seen an acceleration of that growth so we’re very pleased.

FN: Tell us about the overhaul of your telematics.

PC: We took on Mel Mizen who has a real interest and knowledge of telematics. He’s been able to authoritatively talk to customers about what telematics will bring them.

We see it as an important part of the offering that we can make to our client base. It’s important we have something which is industry-leading and consistently reliable so we’ve partnered with Matrix Telematics and we’re able to deliver what we believe to be a superior telematics package at a fair price.

That seems to be going down well with our customer base, in a fairly short period something like 10% of our fleet have got telematics fitted and we see that increasing as vehicles come up for renewal.

FN: What do you think about vehicle manufacturers offering telematics?

PC: It’s a question of whether there is going to be commonality across manufacturers. If there isn’t, it’s going to make it difficult for fleet managers with multi-badge fleets to have a consistent approach. And that’s where I think having an independent fitted system still has relevance.

FN: Have you reached agreement with all the manufacturers about access to data from connected vehicles?

PC: We’re not having arguments with them but that doesn’t mean we’ve finished the conversations. I think there will be a resolution. I think some of the manufacturers had a view that they would monetise the information. I’m not sure that stands up particularly well.

FN: Are you seeing a shift away from diesel?

PC: We are in terms of new registrations. It’s not as dramatic as in retail but we are selling more petrol cars than diesel now. A lot of it is about perception and, dare I say it, the media has created a bit of a storm about diesel.

But, in some cases, the fuel economies associated with diesel are far more important for the environment than the NOx issue, in my opinion.

Cakebread says the fleet industry has proven over the years that it can accelerate the move to lower emission cars but that isn’t necessarily acknowledged by the Government.

He also believes that, with so much change taking place in the industry, businesses now, more than ever, need dedicated fleet managers.

“They’re probably at a time when they could add most value,” he says.

Last year’s runner-up, Marshall Leasing is consistently strong in a closely fought category.
The judges praised its customer-focused approach and the improvements it has made to its technology.
It has achieved growth through multi- and sole-supply relationships and by expanding its leasing offering, entering the minibus market.

Acquisition of Marshall Leasing by BOIUK will ‘open doors’ to growth

Once deal is complete, SME-focused company will be better placed to fulfil potential.

Marshall Fleet Solutions has agreed a long-term contract with R2c Online to provide it with fleet and workshop management software.

Bank of Ireland UK has completed its acquisition of Marshall Leasing from Marshall Motor Holdings after receiving regulatory approval.