Skanska: ‘We want everyone on the road to think about safety’ 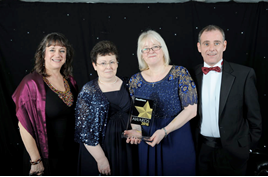 Treating road risk with the same importance as activities such as working at height or in confined spaces has been critical in helping Skanska significantly reduce its vehicle collisions. Between March 2015 and March 2016, the civil engineering company’s comprehensive risk management programme helped achieve a 17% fall in the number of incidents involving cars and 12% involving commercial vehicles.

The company’s holistic approach to road safety sees it take a key role in a number of working groups, including the Chartered Institute of Logistics and Transport’s Transport and Logistics Safety Forum.

Skanska is also committed to both the Fleet Operators Recognition Scheme (FORS) and the Construction Logistics and Cyclist Safety (CLOCS) standard, and requires supply chain members who take vehicles to Skanska locations in the Greater London area to achieve FORS silver accreditation and to become a CLOCS champion.

It is this committed approach to reducing road risk that saw it named safe fleet of the year in the Fleet News Awards. “Heavy goods vehicles are heavily regulated, but if you look at a van fleet there is little regulation around that and drivers don’t say ‘I’m a driver’, but describe themselves as a highways maintenance man or an electrician – they look at the trade they do when they get on site,” says Alison Moriarty, road risk manager at Skanska.

“So there’s a disconnect there and what we’ve done is say that driving is a work activity, and that it needs to be monitored and assessed, with control measures put in place, just the same as we do for our construction industry.

“We don’t treat it any differently than working at height or in confined spaces: we take the view that it is a work activity and must be treated as such.”

Fleet News: How do the employees react to that?

Alision Moriarty: We’ve included driving in our IFE (Injury Free Environment) programme which is the way we approach all safety issues. We did a lot of awareness sessions where we told our drivers that we want them to go home safely at the end of the day; we want them to continue their employment, so we don’t want them losing their licences; and we don’t want them to injure anybody.  We tell them that if they are safe on the road, then all their loved ones are too because they are the same roads. We try and look at it a little bit wider than just driving for work. We’ve had great engagement from all our drivers.

FN: What has been the main focus for improving driving?

AM: It is through training and awareness, but the only skills training we do is if a particular issue comes up, so if a driver had three collisions and they were all reversing incidents, then we would do a slow-speed manoeuvring skills course. In the main, all our training is focused on behaviour. We have lots of different topics we do individual training sessions on, such as speeding, seatbelt use, drugs and alcohol. There are a lot of reasons why the accident rate has fallen, as we’ve put a lot of different policies in place and we’ve started to use telematics more widely now, but it’s going the right way.

FN: What effect has telematics had?

AM: We wanted to roll telematics out slowly across the company, but as people have seen what they can do with it, it’s really taken on momentum. At first, there was a little bit of seeing whether we’d got things like tolerances for speeding right, but it’s going really well. We are seeing a reduction in speeding offences already and it looks like we are making a significant difference in the amount of fuel we are using, so people now are obviously coming on board and more directors are saying ‘I want this in my fleet’. Our use of telematics is very much focused on behaviour so it’s about getting drivers in and saying ‘we notice you are speeding, is there any reason you have to do that?’, because we don’t want to use the information to vilify the drivers. We also need to look at the management and ask if any issues are for other reasons, such as somebody being given an unrealistic target or are not being routed properly. To get driver engagement you don’t want telematics to be seen as just a tool for getting the driver in to tell them off. It’s not about that, it’s all about holistically improving the way we operate.

FN: Skanska has set up a fleet steering group, comprising senior representatives from fleet, HR, health and safety, environment, operations and occupational health. What benefits has this had?

AM: When we started to look at the make up of the committee, we wanted the decision-makers who were influential and would have a say in its fleet policy and the initiative to be in that group. The danger is, particularly if you are doing policy, it would go through fleet and then health and safety, and then HR, and this takes time. We brought all those people together so we can move things through much more quickly. For instance, over a 10 to 12-month period we’ve reviewed every single fleet policy and written new ones. We get really good input from our operational people on the committee: you can come up with brilliant policies that are really good in terms of safety but then the operations people could say we can’t do that because of a, b and c. Getting that buy-in at the time you are discussing it makes everything so much quicker and then when it goes out it’s already acceptable to everybody that’s going to have to use it. The group also raises the profile of fleet safety and you get its members going back into their daily work with that very much at the forefront of their mind as well.

FN: What’s next on your fleet safety programme?

AM: More of the same. We have to finish rolling out telematics, but our strapline for the next few years is ‘beyond compliance to excellence’, so we are looking now at lots of different training programmes. We are looking at things like fatigue. Under EU rules for HGVs, drivers need to have a continuous rest period to ensure they are not fatigued, but there’s nothing around that with van drivers. We’ve said we’re going to do exactly the same for van drivers because you are not more or less fatigued depending on what regulation you are working under. We are trying to really raise standards and say “it might not be legislation, but we want to go further than just being compliant”. For example, we did it with our drugs and alcohol policy, where we didn’t just us the legal limits, we set our own limits (zero tolerance on illegal drugs and 30 milligrams of alcohol in 100 millilitres of blood compared to the legal limit of 80mg) because we don’t want people having any drink or drugs in their system when they are working. We do random, post-incident and for cause tests, where someone is suspected to be unfit for work because of drugs or alcohol. If somebody is over the limit, that’s gross misconduct and goes through the HR process.

Moriarty says Skanska’s success in road safety is largely down to its holistic approach.

“We’ve got lots of good initiatives and policies, but I do think the thing that makes us very successful is the fact that we have got this overarching approach to just wanting our employees to drive safely and get home safely, whether they are working or not,” she says.

“We extend our training to employees who don’t even drive for work. At the moment we are doing a lot of awareness sessions around driver distraction, and that’s for anybody.

“If you’re an admin person or a finance person, it doesn’t matter. We are doing those sessions as we genuinely want everybody on the road to just think more about safety, and I think that engages people and they understand that it is actually for their benefit, not just a company control measure.”