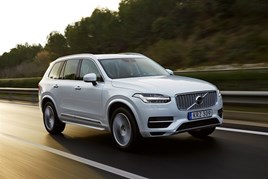 Autonomous driving will lead to a revolution in fleet safety, according to Selwyn Cooper, Volvo’s national corporate operations manager.

“Around 96-97% of accidents are down to driver error and, if you look at it from that point of view, the technology is more accurate,” he says. “City Safety , for example, is not quite autonomous technology but it’s heading in that direction.

“That has reduced insurance claims for low speed rear-end frontal collisions by 28%. The technology does have significant real-world benefits. It’s fair to say autonomous driving will have a dramatic effect on road safety from a fleet perspective.”

One hurdle to overcome is insurance liability. Volvo recently made its stance clear with president and chief executive Håkan Samuelsson saying in a speech in Washington that the Swedish carmaker would accept liability if one of its cars made an error while in autonomous mode.

Volvo needs autonomous vehicles to progress if is to achieve its ambition, known as Vision 2020, that no one will be seriously injured or killed in a new Volvo by 2020.

Selwyn Cooper: It’s a vision we’re aiming for. Our safety team is tracking the injuries and deaths and all the stats suggest we’re on target to get very close to that statement. We’re now in a position where we need to see how the autonomous drive debate evolves. We’re going to get very close by 2020.

FN: How are you going to achieve it?

SC: We already have two of the world’s safest cars, with XC90 and V40. The intention is to replace the entire model range between now and 2020 and all of those new cars will be based around SPA (scalable product architecture) and, for small cars, CMA (compact modular architecture) with all the inherent safety benefits that those two platforms include.

If you link in the semi-autonomous drive characteristics that have started to appear on XC90 with Pilot Assist , we’re seeing safety thresholds being pushed further forward.

FN: What part does your free duty of care programme for SMEs, Co-Pilot, play?

SC: In terms of people that have been exposed to it, it’s significant. Hundreds and hundreds of people will have gone through that programme. This isn’t necessarily about using a free training programme if you buy a car – that would be seen just as a way of selling cars – this is genuinely about putting ourselves at the heart of the safety discussion within businesses in the UK.

FN: Where do you expect to finish the year in terms of fleet sales?

SC: Our fleet sales are up 8% year-to-date, based on the SMMT definition. Using our internal figure, which is sales to businesses through our dealer network, we are 5% up. We expect to take orders for more than 45,000 cars this year and around 68% of them will be fleet. We know we are going to have a strong Q4 with Motability because of the orders we took in Q3. We have had growth in Motability this year of about 12%.

FN: Was that a conscious decision to grow Motability sales, or due to new product?

SC: Product has driven it for us because the rule changes for Motability in the second half of the year have enabled us to place XC60s onto the Motability scheme and it’s been a very popular choice for Motability customers. XC60 is slightly roomier than in the past, in a very modern body style, so it’s worked particularly well.

FN: Presumably, those things are appealing to all fleets, not just Motability?

SC: Absolutely. XC60 has been a very strong performer for us in fleet this year – we’re 35% up. It is quite a compelling offer in terms of the things that are key to fleet customers. Lots of companies have a cap on CO2 – 130g/km is a very popular cut-off point – and the front-wheel drive manual and Geartronic versions of XC60 both come in under that  130g/km cap.

FN: What are your fleet sales expectations for XC60?

SC: I think we will at least maintain, if not grow, our fleet sales. CO2 issues are not going to go away – emissions are critically important for people at the moment. Also, I don’t think what is going to go away for the foreseeable future is the attractiveness of that body style. I think there will be market demand for it. I think we’ve got a great product. It’s stylish, it’s affordable.

FN: What reaction have you had from fleets to the XC90?

SC: Very positive. Company Car in Action was our opportunity to show the car and talk to people in an environment where they could drive it. We have done a lot of ride and drive events through both my end-user team with end-user customers and my leasing team with the leasing companies. We’ve had some interest from directors of leasing companies. At an SME level, the powertrain has not been as critical to them so we’ve seen strong interest, again at director level – these are £45,000 cars at least. At a corporate level, where fleet policies are more restricted, we’re seeing a terrific amount of interest around plug-in hybrid T8, which has CO2 emissions of 49g/km.

FN: Will that be the most popular with fleets?

SC: We were anticipating 10-15% of XC90 sales to be that plug-in hybrid version, but actually the current allocation for model year 2016 has just sold out. We expected more of an even split between the Momentum and Inscription trim levels but we’ve found the higher spec, and therefore more costly, Inscription model has been more popular with customers. Yes, the T8 is going to be another step up price-wise but clearly there is an appetite, with a fleet and retail audience, for higher spec product. We’ll sell 4,500 XC90s next year which will be the first full year of its life.

The T8 plug-in hybrid version of the XC90 marks the start of Volvo’s new electrification strategy which will see plug-in hybrids introduced across Volvo’s entire range.

Volvo will also develop an entirely new range of electrified smaller cars and build a fully electric car for sale by 2019.

Within two years it expects electric cars to make up 10% of its global sales, which will roughly translate to 10% of sales in the UK.

“We want to grow again next year, we’re in the planning stage for that now,” says Cooper. “We’re going to have a busy year launching new products. We’ve already announced S90 and V90. They give me confidence that we’ve got serious contenders in the business sales arena and, like the XC90, we’ll have cars that take us to the next level.”