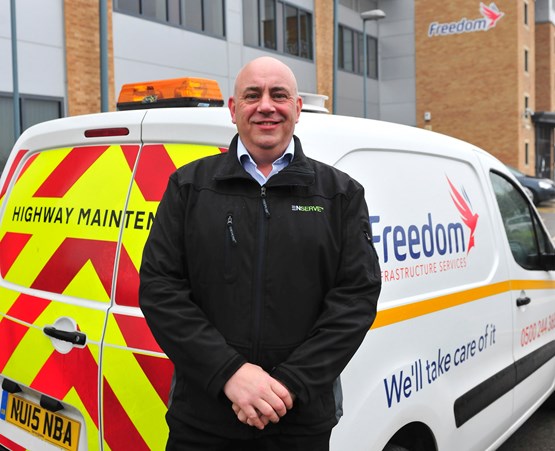 A focus on funding, fit-out and compliance has kept head of group fleet Paul Brown busy since joining Enserve three years ago.

Brown has been in fleet and logistics for the past 35 years, starting as a warehouse operative before working his way up to driver, transport supervisor, transport manager and, finally, head of fleet.

The Enserve group of companies are generally specialist contractors to utility providers. Brands including Freedom Group, Meter-U and H20 Water operate nationally, with a diverse variety of fleet requirements across its 550 vans, 175 cars and 10 HGVs.

For many, including engineers at Freedom, the vans are mobile workshops. “They could be up in Scotland on a wind farm for three or four days, or working on the London Underground,” says Brown. “Everything they need has to be in the back of their van.”

Freedom is a specialist services contractor, working on behalf of utilities companies and infrastructure networks across long- and short-term contracts.

Commercial vehicles had previously been funded on four-year contract hire deals, but Brown wanted to opt for a different kind of approach, to give him more operational flexibility, when he went out to tender last year.

“Around a year ago, we began a long-term flexi-rent deal,” he says. “I’ve found leasing companies to be really helpful, until you sign on the dotted line. Then they become quite inflexible when you need a bit of help and support changing contracts or swapping vehicles. It’s a case of ‘computer says no’.”

Under the new deal, Brown says he can do this without any additional financial outlay.

“We went out to tender, which Northgate asked to bid for, and it came in with prices that matched the leasing companies,” he says. “It can procure vehicles at the same costs as a leasing company, but it has got its rental outlet for vehicles coming back mid-term. Obviously, we have to put any damage right and get them back to a rental standard, but we’d have to do that for any other leased vehicle.

“It gives us the flexibility if a contract changes, or we lose a contract, to send vehicles back – we won’t end up with a depot full of empty vans. We can send up to 20% of our fleet back early each year without penalty.”

Brown estimates the new deal’s flexibility will save the company £50,000 a year in early termination charges. The company would have saved £100,000 last year if it had been on flexi-rent, he says.

He drew on past experience with Northgate when selecting it to fund and supply Enserve’s fleet.

“In a previous job, I’d worked with Northgate Vehicle Hire when we took over large scale council contracts,” Brown explains. “We’d TUPE all the workers over, but never get a true picture of the fleet until we were on site. We sometimes found the mailroom driver in a box Luton van because that’s all the council had at the time.

“We’d use Northgate to fill the gaps for the first three months while we established what we’d got, and then order new vehicles on a four-year lease, keeping the rental vehicles until the new ones arrived.”

Brown says that Northgate had always been keen to forge longer term deals, and it was something he investigated further at Enserve. While the obvious benefits of returning vehicles mid-term and acquiring vehicles for a new contract at short notice are key, there are other benefits, too.

“When the vehicle goes in for service to a Northgate depot, we get a replacement, and the leasing companies wouldn’t necessarily do that as they use the dealer network,” says Brown.

Northgate’s Tracker-based telematics system is also included, which has so far delivered a £225,000 fuel saving from removing 50 under-utilised vehicles, improving fuel economy, reducing vehicle idling and improving route planning. Brown anticipates a further fuel saving of £60,000 this year. “It is having a massive impact,” he says. “We keep telling our directors you can’t get massive fuel savings like this every year, because within three years we wouldn’t be spending anything on fuel. The fall in fuel prices has also contributed.”

The majority of the 175 company cars are for commissioning engineers, who go out and test circuits and systems.

Brown looked at the vehicle requirements – generally a mid-range estate car – and then shortlisted vehicles based on emissions, economy, driver P11D value and cost.

The vehicles are supplied by Alphabet on  a four-year/120,000-mile contract hire package, with maintenance. “Instead of having various choices, we picked one brand for a solus deal,” says Brown.

“Volkswagen won based on reliability, performance and environmental impact. We went to tender in January 2014 and Golf estates were supplied from May to September of that year.”

The majority of cars on Brown’s fleet are job need – he explains that the company offers an attractive cash allowance which many of those entitled to a vehicle have  opted for.

“We moved away from various car grades and now have just two – either a Golf or a Passat,” he says.

“We limited the colours to business colours to avoid problems reallocating to new managers. Drivers cannot choose options – but we choose the top spec so there’s not really anything to complain about.”

Enserve has 200 cash allowance drivers, but in the past these were not closely  monitored.

“The car is meant to be under five years old, insured for business use, fully maintained with breakdown cover.”

After replacing the company cars, Brown’s next priority was the grey fleet.

“When we looked into the grey fleet, it was a minefield,” he says.

“We helped write the new policy with HR, but the minute a new employee joined the business and accepted that policy, the management and policing would sit purely under fleet. There are now no grey areas.”

Brown took a hard line, bringing all drivers under the fleet department, and giving them time to comply. “We set up a ‘grey fleet amnesty period’, and gave drivers 120 days’ notice that we would be enforcing the policy,” he explains. “There were people who said ‘I haven’t been saving my allowance’ – well, sorry, it’s a car allowance.”

If a driver hadn’t complied, their allowance was suspended. “While a driver is on probation, we’re not forcing them to go out and buy a brand new car, so they get a three-month grace period,” says Brown.

“We check it’s insured, and their driving licence is in place, but it can be older in that time. We follow up when they’re ending their probation to ensure their new car is compliant – it gives them time to build a deposit.

“We now perform an annual audit, where we check all the paperwork and do a licence check.”

With improvements in the offerings of leasing companies, the fleet has come to rely on its service providers to perform many of the tasks previously undertaken in-house – over the past decade, the fleet team has shrunk from 10 to two.

“The business needed to operate its own workshops – and renewing tax discs was pretty much a full time job,” Brown says.

Now, maintenance of cars is through dealer networks, commercial vehicles are looked after through Northgate’s rental depot network and accident management is handled by FMG, to whom calls involving vehicle accidents are forwarded from Enserve’s safety hotline.

“It’s a case of working smarter not harder,” says Brown. “If we can get someone else to take on that workload, and it’s included in our costings, why wouldn’t we?”

Fleet champions across the business

Brown operates the Enserve fleet from Freedom’s headquarters in Wakefield with support from fleet adminstrator Diane Maddocks, but each of the company’s 50 sites in the UK has a fleet contact. “They don’t look after fleet full time, but will be our point of contact in the depots,” Brown says.

He sees the fleet contacts as valuable cornerstones in the operation – feeding information both to the fleet team in the office, and vice versa back to drivers.

“One of the fleet contacts started displaying the driver league table off the telematics system and put up on the wall with a football focus, grouping the drivers from Sunday League to Premier League,” says Brown.

“It put drivers in a position where they didn’t want to be at the bottom of the table. Drivers were having their own little challenges – for example: ‘if I am above you by the end of the week you wash my van’.

“Accident stats reduced by around 25% in that depot, purely because of the tables. The initiative is now part of  a board level initiative across the business, and we’re now looking to reward the best drivers.”

A fleet contact at a different depot developed another idea to check the eyesight of drivers.

“We’ve had guys who clipped their wing mirrors every time they parked up,” says Brown. “Many of our vans have sensors and reversing cameras now, and if a driver is still doing it, we give them a Specsavers eye test voucher. It’s a quick fix and they get some glasses if they need them. People often know they need glasses for reading, but often don’t associate it with judging distance.

“Our fleet contact in our Birmingham depot found some old number plates and put them on the wall at the end of the corridor and got drivers to read out the plates. Some drivers got clever and told their mates, so the team ended up swapping the plates every few days, and it worked really well.”