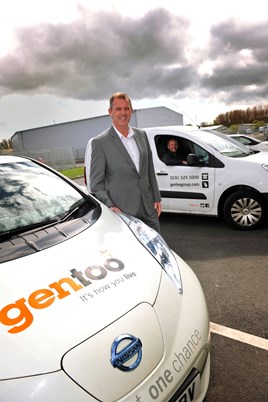 But it didn’t start out that way. When the company was formed in 2001, after Sunderland City Council transferred out its housing stock, Watson had a steep, time-consuming learning curve.

“At the time, the housing stock sat within the public works department of the council, where I was on the procurement team,” he says. “Transferring to the new company, I took on responsibility for vehicles, and discovered that the van fleet was primarily made up of expensive short term hire – my first job was to address that, and acquire contract hire vehicles.”

Today, the business has a number of divisions, including Gentoo Sunderland, a social housing provider, Gentoo Homes, a new home construction firm, and Gentoo Green, an environmental sustainability department.

“My role involves putting the contracts in place with the leasing providers, dealing with manufacturers and agreeing terms, and looking at product, including demo vehicles,” Watson explains.

He is also responsible for drawing up the tenders for each renewal of the commercial vehicle fleet. The fleet is on a three-year contract, with an option to extend for years four and five.

“Our tenders go out through OJEU – the Official Journal of the European Union. Each time we’ve sent a contract out, we’ve got more and more experience,” he says.

“We have the option to go out to various buying consortia, including Crown Commercial Service and Procurement for Housing, but we chose to go to tender independently on our own terms.”

After consulting with a number of manufacturers, Watson was told that he could secure discounts that were just as good as those available on the buying framework.

“They advised us to negotiate our own terms directly,” he says.

Gentoo’s tender document has weightings across a number of criteria, including price, environmental impact, business practices and employment opportunities.

It resulted in a solus deal with Citroën for all commercial vehicles, with a couple of exceptions. Those include the 5.5-tonne Ivecos used in Gentoo’s grounds maintenance division.

Vehicles are tailored to meet the requirements of the respective division usage with feedback sought from drivers.

“We set up a team of tradespeople to trial a range of vehicles within the business,” Watson says.

He says: “We ran extensive trials, up to six weeks long, with vehicles in for a week or more. It was important for us to get feedback from across the range of trades on each particular vehicle.”

A number of vehicles were downsized as a result of the new contract and review process, with input from operations managers across the business.

Watson explains: “Previously, we never really questioned it. If a driver was in a Transit, it was replaced with an equivalent.

“Now, if a driver is in a Relay, we ask if a Dispatch would be suitable. It gives us better CO2, better fuel economy and a saving in leasing costs.”

Lambert adds: “We tried to unify vehicles across a trade, so they were consistent, and then looked at the stock they were actually carrying within the vehicles, with a view to reducing weight. Tradespeople are notorious for hoarding stock, so we also saved money putting unused stock back into the stores network. The benefits were twofold.”

Watson says feedback to the change has been generally positive.

Around 80 of the 350 vans on fleet were downsized, from Relays to Dispatches, and from Dispatches to Berlingos.