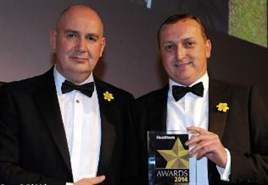 Darren Bell won the headline award of Fleet News fleet manager of the year, after reducing fleet costs by millions of pounds for G4S Cash Solutions.

He managed to overcome numerous challenges through a combination of innovative technology and driver engagement. He helped drive down road traffic accidents (RTAs), increased the fuel efficiency of the fleet and achieved a significant reduction in CO2.

Bell joined the business four-and-a-half years ago from a fleet background primarily in the armed forces.

In 2012, he set an ambitious target to reduce RTAs by 20% and introduced a bespoke in-house risk assessment tool for drivers.

The system was used to profile drivers, while he also employed a road risk manager in a new role specifically aimed at reducing RTAs.

Driver education and training was beefed-up, with daily debriefs, in-house driving competitions and campaigns. It had the desired effect: statistics showed that RTAs were at a record low following a 27% fall, which delivered annual savings of £850,000.

He also embraced telematics, using the data along with increased driver engagement to drive down CO2 emissions by 1,500 tonnes and reduced fuel spend by 13.9%, saving £1.13 million per year. That was helped by the adoption of two fully-electric cash-in-transit vehicles, as well as having 210 vans fitted with photovoltaic panels to reduce idling time.

Improved efficiency and reliability also enabled 84 vehicles to be cut from the fleet and savings of £180,000 per annum, because of a reduction in breakdowns.

Bell left no stone unturned in his quest to deliver one of the most effective fleets in the country and his hard work did not go unnoticed.

A fleet review for the whole of G4S followed and, 12 months later, the company has amalgamated its fleet, with Bell at the helm of the new-look operation.

Fleet News: When did the process of amalgamating G4S’s fleet operations begin?

Darren Bell: We started looking at a shared service model around 18 months ago. We got together the senior fleet people from the different business units across the organisation and began looking at how we could develop our operations.

There were three models on the table.

The first of these was to do nothing, to stay the same, with individual businesses retaining their own fleet element.

Secondly, to develop a fleet community, which would involve more collaborative working. However, the risk there was that people would continue working in their silos, because they wouldn’t necessarily find the time to share best practice.

The final option was full centralisation: one central fleet team serving the whole of the UK and Ireland G4 business. That ended up being the preferred option.

But it had to be designed around a structure that had the capability to deliver across all the business units and I was tasked with making that happen.

FN: How did that change the fleet make-up, considering you were previously only responsible for the Cash Solutions operation?

DB: I think it’s fair to say that we’ve probably got one of the most diverse fleet operations in the country now. There’s everything from armoured vehicles to ambulances, and it increased my fleet responsibility from some 2,000-plus vehicles to more than 6,000 units, spread across six overarching business units, which in turn serve 29 individual businesses.

FN: How difficult was it to bring those different elements of the business together?

DB: It was a huge task just to understand where all the vehicles were, whether they were contract hired or owned – and establishing what assets we had. When you’re dealing with 29 business units it’s difficult to do that quickly.

However, having started the process last summer, we set ourselves the ambitious target of introducing the new structure by October 27 last year.

The only other project I’ve seen like this was the  amalgamation of all the different police forces in Scotland into one operational unit and they had three years to do that – I had three months to do 29 businesses.

FN: What was key to making that work within the timescale required?

DB: It was important that we first organised the structure that had the capability to deliver on all aspects of fleet. That meant we needed to ensure we had the leasing and contract expertise, along with the logistical and engineering knowledge within the team.

It was also about making sure we could deliver what the business required, while achieving a £500,000 head count reduction, sharing best practice and harvesting further savings through supplier alignment.

FN: So how did you make that work in practice?

DB: We created a business partner for each of the overarching businesses who would be their conduit into fleet. That gave us one person dealing with the senior leadership team of each business unit for all matters fleet.

If there are any issues, he or she will bring it back to the central team and it will then be dealt with by the relevant person.

There are 52 people in the fleet team, plus a number of people providing back-office functions, with nine managers reporting to me. They are: a commercial contract manager, a vehicle design manager, an engineering manager, two regional transport managers for north and south, two regional compliance managers for north and south, a national fleet operations manager and a national logistics and asset manager.

FN: Do you envisage using some of the lessons learned from Cash Solutions with the wider fleet?

DB: Yes, we’re looking at rolling out telematics across the wider fleet and harmonising our supplier network. That gives us economies of scale, and means a better deal for the wider business. In addition, where we’ve developed best practice around the advanced use of telematics, we can now empower managers to do the same with their drivers. However, it’s also been about recognising the incredible talent we’ve got within the fleet team and utilising those skillsets across the wider businesses.

FN: What is your fleet team focusing on now?

DB: What we are currently working hard at is controlling assets. We’ve now got a bird’s eye view of operations, so we can now focus on utilisation.

It’s been a year of significant change for Bell, who acknowledges that the recognition of him and his team at last year’s Fleet News Awards played its part.

He says: “If I’m honest, I think it certainly helped me secure this wider role. We were looking at developing this centralised fleet model anyway, but obviously the recognition I received put me in a great position to be considered as a candidate to lead the new team.

“It also helped give greater exposure within the wider business to what we had achieved with the Cash  Solutions fleet, which was testament to the hard work of everybody involved.”