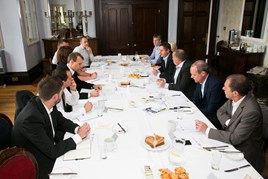 Pressure on fleet managers to reduce CO2 emissions is being exerted from many sources, from boardroom-driven policies to customer demands.

Many of the fleet professionals who attended a recent Fleet News roundtable, sponsored by Barclaycard, have found that drivers are now keen to adopt greener vehicles, which wasn’t necessarily the case only a few years ago.

This is partly due to company car tax bands which mean drivers can save money by opting for lower-CO2 vehicles, as well as growing acceptance of new technologies.

The greater availability and desirability of lower-emitting cars is also playing a part as manufacturers work towards complying with European legislation which requires them to achieve average CO2 emissions levels of 95g/km by 2021, and 75g/km by 2025.

How important is the environment to your business?

Aaron Powell: A lot of our customers are expecting us to reduce our vehicle CO2 emissions so this will have a big effect on us over the next few years.

Paul Tate: It used to be quite difficult to persuade employees to take on green vehicles, so we had an incentive/disincentive scheme to encourage this. Now, when the employee starts playing around with the company car tax bands and seeing how much that impacts their own pocket, they naturally are going for more environmentally-friendly vehicles. Legislation coming in for manufacturers to reduce their average CO2 emissions will also have an effect on our emissions.

Julie King: We’ve seen an increase in the past year in the number of drivers who are going for the lower CO2 cars. We’ve just redone our car choice list for the general fleet and 50% of the cars on offer are less than 100g/km of CO2. And people are going for it. Even the staunch Ford Mondeo drivers who have always had to have a 2.0-litre engine are going for the 1.5-litre diesels because of the CO2. Our average CO2 for the general fleet is 118g/km. Our executive fleet is very interested in a Mercedes-Benz model which has emissions of 98g/km.

Colin Hutt: Most of our drivers are now going for low emission diesels.

Paul Tate: I look at the low emission diesels and wonder if it is going to be the fuel of the future over petrol. You look at how governments have reduced the permitted levels of NOx in legislation and one manufacturer told me 80% of the engines which are in test with the fuel companies are actually petrol. Also, with diesel, you look at some of the issues with the diesel particulate filters (DPFs). The last thing you want to do is tell a driver not to thrash his van for reasons such as safety and efficiency, but then you get the DPF issue and you tell him to go on the motorway and thrash his van. What sort of message are you getting over?

Is anyone looking to implement policies for introducing petrol vehicles?

Julie King: Our drivers have the option of taking on petrol vehicles, but the general choice is diesel.

Paul Tate: The question is: when is that time to potentially switch and really consider petrol as an alternative? Is it when the fuel economy of the new petrol engines exceeds a certain amount, or when it is on a par with a diesel? I think that’s when it’s got to be considered. You have to look at the use of the vehicle as well.

Steven Pope: The ultra-low emission zones, where you can only use vehicles below 75g/km, will have an impact. There’s virtually nothing below 75g/km from a conventional powertrain, so you are looking at hybrids.

Keith Abell: From a policy point of view, it’s a difficult one. You don’t know what’s going to happen in the future, but you need to put policies in place which take it into account. A lot of a policies are driven by legislation, so it’s important to know what legislation is going to be introduced so you can react to it in a timely manner.

What sort of experiences have you had with electric (EV) or hybrid vehicles?

Colin Hutt: We’ve had a slight increase in interest in plug-in hybrids. We’ve taken on a few Mitsubishi Outlanders, and we’ve ordered three Nissan e-NV200 electric vans to replace diesel vans because we’ve got quite a large site so it makes sense to go electric. We are going towards electric but I’m not convinced it will be the long-term answer.

With regard to fuel and business mileage, what do you do to ensure compliance with the HMRC?

Aaron Powell: We introduced The Miles Consultancy mileage capture system in January as a trial for 21 people for a couple of months and have now rolled it out across the company car fleet. It can do the different types of schemes so, if someone is fully expensed, it can do that; if someone is on deduction, it’s the same.

Regardless of whether they’re on fully expensed, everyone has to record all their business journeys. We’ve moved four people over from fully-expensed fuel because we’ve worked out that they will save money if they’re on deducted and I reckon a lot more will move across.

Paul Tate: A big bugbear of my life is the plug-in hybrid vehicles that travel the first 20 miles on electricity, which a fuelcard doesn’t capture. As technology is changing, the current format of a fuelcard may not be a solution as it does not capture all the elements of drive change within the vehicle. That’s an issue I’ve had, so much so that I’ve had to take fuelcards off the people with plug-in hybrids and go to AFR rates. They are now complaining that they don’t get recompensed for the fuel at the back-end because the cost of their fuel is not covered by the nine pence per mile the Government allows because it bases the payment on the size of the engine. Some of these hybrids are two-tonne vehicles which are doing 30mpg when they are not running on electricity.

Aaron Powell: With all-electric vehicles, will we be able to use fuelcards in the pay station when charging?

Paul Hollick: Generally, that network is run by Chargemaster, but most people with EVs will do their charging at home or the office, therefore it becomes more about what to pay employees for domestic use of their electricity. The biggest issue for EVs is the cost of installing a commercial charging point because they are thousands of pounds. We have a lot of customers who have EVs and, as long as you are paying the right amount of the cost they have incurred, then that’s fine, HMRC will be happy, but it’s just working out what the pence per mile charge should be.

Do you have any other initiatives that you are planning to introduce?

Aaron Powell: All our new commercial vehicles have engine cut-offs installed to help prevent idling. Rather than stop-start technology which is taking off anyway, this system will turn the engine off after it has been idling for a certain number of minutes to save fuel and reduce CO2. You can set the time when it cuts off for however long you want to suit your needs. We haven’t had it for long so haven’t measured its impact yet.