Aston Barclay: ‘We probably punch above our weight but we want more’ 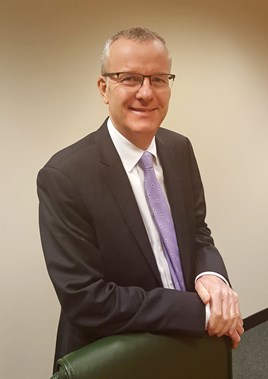 A new vehicle inspection system introduced as part of a £7.5 million investment will speed up sales and lay the “foundation” for growth for remarketing company Aston Barclay.

The system, which recently went live across the company’s four sites – Chelmsford, Leeds, Prees Heath and Westbury – will feature the National Association of Motor Auctions (NAMA) inspection standards in response to pressure from fleet customers for national consistency. The grading will be used alongside Aston Barclay’s own grading, which is based on cosmetic repair costs. “It will increase the speed and accuracy of our inspections and lays the foundations for further developments with vendors and buyers in this area,” says Glenn Scarborough, managing director of Aston Barclay.

The market is demanding more transparency on vehicles prior to sale, according to Scarborough, but this brings additional time and cost, which has slowed down pre-auction processes over the past five years.

“There is demand from buyers and sellers to provide more information which predominantly covers the imaging and inspecting of vehicles,” he says. “The costs incurred to provide these services include IT, staff, cleaning, additional vehicle movements and the cost of storing cars for longer.”

Aston Barclay sells vehicles for a number of FN50 companies, including Alphabet, LeasePlan and Zenith, and the de-fleet process can vary, with some leasing companies having external processes carried out prior to sale and others requiring inspection information to be returned before authorising the sale.

The company can turn around a sale within 24 hours, under ideal circumstances, but fleet vehicles, which generally come in over a staggered time period, can be on-site for a week or more. To mitigate this issue Aston Barclay has a team of four inspectors at each site, working around the clock to assess each vehicle as it starts its journey through the remarketing process. Each inspection takes around 20 minutes to complete. The car is then cleaned and photographed before being parked ready for sale.

To compete for fleet contracts, Aston Barclay offers a range of de-fleet services including collection, storage, and full preparation. Scarborough says the business is keen to expand its defleet operation and is looking at increasing capacity, to deal with greater volumes.

The £7.5m investment (derived from business growth over the past five years) has included revamping its premises, with the most recent being its Brook Lane site in Westbury, which has had £750,000 spent on improved facilities for buyers, improved staff offices and a new viewing gallery for its vendor customers.

It has also invested £700,000 in its transport fleet with six new Scania transporters and two new MAN transporters, plus bespoke Pegasus trailers from Rolfo. The custom trailers improve load flexibility by enabling additional vehicles to be carried, reducing the time needed for loading and unloading at customer locations.

As part of upgrading its vehicle collection and inspection strategy, Aston Barclay has also installed dedicated imaging studios at its Prees Heath, Leeds and Westbury sites. These feature new turntables with full ground and elevated lighting.

This allows for vehicles to be imaged from every angle and uploaded to online sales catalogues.

Aston Barclay’s Chelmsford site is set to get a new inspection bay and further investment is planned for Leeds to bring it up the standard of the other centres with new auction halls and client services. The Leeds site is already arguably the company’s biggest success. It was acquired in 2011 to give the business national coverage, but Scarborough says: “We bought it at a time when the market was difficult. The existing site had closed due to poor business so we took a big risk.

“We underestimated how quickly we could get it up and running and it took a lot longer to find sellers and buyers.”

Nonetheless, the branch is now successful thanks to having the right team in place and investment in facilities and infrastructure. The site was named LeasePlan UK’s auction provider of the year for 2015.

Scarborough, who took control of the business alongside brother David when their father retired in 2010, says: “Our business has a shallow management structure, the people who run the group are spread across the four locations and they deal with the buyers and sellers every day. This relationship with the customer means we get regular feedback and are able to react quickly.

“They have the confidence and authority to make decisions, giving huge flexibility and power at a local level. They also know how to get the right people into the auction rooms and that’s a big part of what makes us successful.”

Historically, Aston Barclay dealt with smaller outright purchase fleets but Scarborough says: “We rarely come across managed fleets now. More businesses are moving towards leasing and management companies so we tend to target them for volume.”

He continues: “We see every sector of the industry as an opportunity and we’d certainly like to develop our fleet representation further. Once you come out of the top 10 leasing companies there are fewer and fewer big players. We’d like more but I think we probably punch above our weight.”

Aston Barclay’s other major investment has been in the adoption of new technology. Its Live online auction service, which originally launched in 2009, has been fully optimised for both desktop and mobile devices.

While the company embraces the web and has seen between 20-40% of sales be made through Live, it maintains that the success of an auction is based around the marketplace environment. Online catalogues and vehicle reports have made it much easier for buyers to make decisions ahead of visiting the site but Aston Barclay believes most buyers thrive in a traditional auction environment where they can monitor prices and see what competitors are buying.

Scarborough explains: “What we are interested in is getting the best price for a car. This means getting people to bid, so we have to provide the widest platform possible. We don’t want to force a particular route, if people choose to bid online or in-hall we don’t mind.  It’s about using a competitive market place to generate prices and using it in different ways through technology. Without lots of bidders there isn’t the same drive for people to bid up prices.”

Moving forward, the company will be looking at alternative methods of selling by auction. This includes the possibility of selling cars that aren’t on the premises. “Pre-selling could make things cheaper for us and our customers,” Scarborough says. The aim would be to try and auction the car before it comes off lease and transport it straight to the new buyer.

However, it is “fraught with issues”, says Scarborough. “You need cooperation from the user and getting accurate information, photos and condition reports before de-fleet is difficult, especially when you factor in the time lag before sale.”