Chevin: ‘Those that don’t convert will be left behind’ 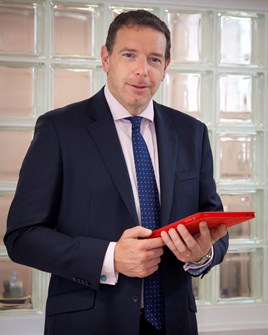 Fleets are becoming increasingly accustomed to new phrases, such as ‘connectivity’, ‘mobility’ and – in particular – ‘big data’. The latter is the glue that will hold all future innovations together, and it is here that fleet management software systems have a fundamental role to play.

According to Ashley Sowerby, managing director and owner of Chevin Fleet Solutions, fleet management software systems are increasingly about data consolidation – pulling in information from multiple and disparate sources to provide a holistic overview of fleet performance.

“You have companies using different service providers and they need operational reports to make sense of information they get from these different tools,” he says.

Availability: In more than 100 countries, including UK, USA, Australia, Germany

“With one platform, they get top level data, which they can drill down to get more detailed information.”

Naysayers – those wedded to excel spreadsheets to document all their fleet experiences – will be scrambling to declare that, as someone with a vested interest, Sowerby “would say that”, but they are in a shrinking group.

That said, of the many enquiries Chevin receives each month, just 25-30% of companies running 50 or more vehicles are using software, rising to 40-50% for fleets above 250 vehicles.

“We still find Excel being used in places where you wouldn’t think you’d find it, such as high profile, complex fleets. And you also have very small fleets with professional fleet management systems,” says. Sowerby “Often a change of staff can trigger change – for example, if you have had a fleet manager that has been there for 20 years.”

However, as Sowerby adds, with vehicle connectivity and mobility moving into the centre field, fleets will be receiving “more data all the time – it’s only going to get worse”.

He has a warning for companies still holding off from making the investment: “Those that don’t convert will be left further and further behind as more data and information becomes available.”

Sowerby lists a range of benefits offered by fleet software including driver trip-logging, daily inspection reports, out-of-hours working, instant self-certification rather than carbon copying, fewer disputes with customers and, ultimately, improved cashflow. “It is expensive to manage a paper process. Software removes that admin and frees-up time and resource,” he says.

Smartphones have added another dimension. Chevin’s core FleetWave product is now available via an app which means staff out in the field can do requests and send them to finance departments to speed up the invoicing process. This also extends to job sheets for engineers and areas where customer signatures are required, such as deliveries.

“These are all ancillary processes to fleet,” Sowerby says.

This underpins the Chevin proposition from its conception in 1990. Its fleet management software is based on the notion of ‘definable tables’, whereby users can design their own content needs, sometimes outside of the fleet environment to replace spreadsheets. Examples include database management for photocopiers or mobile phones.

Sowerby takes up the story: “As that happened at a customer level, we picked up common themes, for example PCNs , where fleets created their own module. We didn’t offer it, so we developed one to enhance our core offering.”

Asset management for municipals, particularly the emergency services, became another module as Chevin started to bind together other departments related to the vehicle. It resulted in the launch of FleetWave in 2001, still Chevin’s main product, which moved fleet management into asset and finance management and, increasingly, into customer management.

“We can do all this because we offer flexible software,” Sowerby says. “We are a software house so we can customise processes and end up with software for a business that also manages the core of fleet management.

“This has since opened up other opportunities, for example in heavy construction with plant management which is worlds apart from a company car.”

He points to bolt-on products such as ‘Authority to Operate’ (A2O) which ensures that truck drivers have the authority to operate cranes – something that is particularly crucial when a company uses a lot of agency drivers. “The booking of agency drivers is often at short notice, so our system integrates into the driver hire platforms,” says Sowerby.

The move towards web-based management software has changed the make-up of the UK market. The levels of investment required have reduced the number of suppliers, while contracts for multinational organisations are increasingly sought at pan-European or global level.

Sowerby says Chevin is evolving from being a provider of fleet management solutions to one of enterprise solutions, commonly rubbing shoulders with the likes of IBM, Oracle and SAP during large European corporate tenders. That’s due to their functionality requirements which traverse purchasing and financing.

The situation is slightly different in the UK, where the role of the fleet manager is more prevalent. Here, a variety of fleets make up Chevin’s client base, from SMEs to large corporates, private and public sector organisations and those running cars and vans.

“We are more mature in the UK, but this also limits their ability to use a system in other functions such as finance because they are very focused on vehicles,” says Sowerby.

Chevin continues to enjoy double-digit growth in the UK, and in its other three core markets (America, Australia and Belgium). Its presence in other major fleet markets offers benefits to the UK by importing learning from elsewhere.

One example is the pool car key box, which originated in America. The unattended system solves the issue of what to do with keys when a pool car is collected or returned out of hours.

Keys are stored in a secure cabinet. Once approval is received for the employee to take a pool car, a pin code is issued which unlocks the cabinet.

When the car is being returned, the driver taps in the code and confirms that the vehicle has no defects, is clean and contains fuel. The door then opens and the key is put back.

If there are any issues with the vehicle, the key is still replaced in the cabinet but the system reschedules any other bookings for the pool car until the issue is addressed.

The system has since been extended to other company assets, such as laptops.

“Utilisation is big in the US, so it can impact on strategies in the UK,” Sowerby says. “In Australia, they are big on car clubs and mobility, so we can draw on that expertise.”

He expects to continue growth in the UK, both via the legacy system where there is a reduced number of competitors, and from the move towards SAAS (software as a service, where the software is sold via subscription but hosted centrally).

“Fewer companies are buying software and that works well for us; that’s where we see ourselves,” Sowerby says.

Recent developments include a FleetWave Academy, with Chevin putting training material into the hands of its customers. Videos show how Chevin manages its business and how FleetWise can help to improve efficiencies. Some customers are repeat viewers.

The biggest benefit fleets claim after making the investment in fleet software are savings in administration when managing data and multiple third party systems.

Global marketing executive Brendan Adams, says: “The whole point of fleet management software is to have a central system that you can run and see everything at the touch of a button. It gives you instant notification if there is an issue and it is all automated.”

Sowerby adds: “You have the ability to monitor trends, especially from telematics data. One you have the data, you can use it to change behaviours. But it has to be automated, otherwise people turn off the systems because they are drowning in data.”

When Sowerby launched the FleetWave system almost 15 years ago his strapline was ‘the freedom to manage’. “We want to allow the fleet manager to manage the fleet rather than be an administrator answering queries. Let the software handle the day-to-day,” he says.

“That is still our underlying theme.”