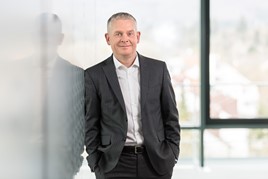 The past 12 months have been rather rocky for Jaguar Land Rover. It started 2020 having reported nine-figure losses in the last quarter of 2019, its global sales were declining and its model range was heavily reliant on unpopular diesel.

Added to that was the announcement of job cuts at its UK plants while chief executive Ralf Speth, who led the business for the last decade and helped it maximise its position in the growing SUV market, announced he would be stepping down.

When Andrew Jago took over the reins of JLR’s UK fleet and business division in August 2019, the brand’s opportunities for sales growth in the corporate sector were heavily reliant on its forthcoming electrification strategy.

Following an announcement that it would begin production of fully electric models in the UK, JLR expanded its electrified vehicle line-up with the launch in mid-2020 of a new plug-in hybrid variant for its two best-selling vehicles – the Range Rover Evoque and Discovery Sport.

Their introduction marks the second phase in the electrification of the company’s Halewood plant in the UK. More than 1,500 employees have been retrained to build electrified variants of the SUVs. This follows the earlier enhancements at the plant for the launch of mild hybrid assembly facilities and a new stamping line.

Mild-hybrid technology has already been deployed across JLR’s combustion engines – helping to reduce CO2 emissions and boost fuel economy – while fleet-crucial plug-in hybrid engines have since been added to Velar, E-Pace and F-Pace, making them much more appealing for user choosers.

Already, the brand is seeing an uplift in its fleet sales as a result of the new additions – having confirmed more than 3,000 orders for the Evoque and Discovery Sport PHEV models alone from fleet customers before the end of 2020.

“In terms of the channels, user chooser is one that we’re really seeing significant growth opportunities in but, obviously, salary sacrifice strongly favours plug-in products as well,” Jago says.

Fully electric models are also a significant part of JLR’s fleet strategy. The I-Pace, which is built in Austria, is a strong fleet performer with around 80% of registrations going to true fleet customers.

Soon, it will be joined by the next-generation XJ, which will be the first car in its segment to be fully electric, alongside two more fully electric models.

JLR’s mission is to create a more sustainable future with zero emissions, zero accidents and zero congestion. It calls this strategy Destination Zero.

For the past two years, the carmaker’s UK facilities have been certified as carbon neutral by the Carbon Trust and it has more than halved the CO2 emitted per vehicle across its product range over the past decade.

The next-generation Jaguars and Land Rovers will be manufactured at JLR’s newly electrified plant in Castle Bromwich, using batteries developed in its Battery Assembly Centre at Hams Hall and Electronic Drive Units produced at its Engine Manufacturing Centre in Wolverhampton.

Commercial vehicles present a greater fleet opportunity this year too, with the Discovery Commercial, which accounts for one in four Discoverys sold, being joined by the all-new Defender.

As for diesel, Jago says there is still a place for it, but he accepts that models like the XE and XF – that were once the core fleet sellers – will remain on the back foot against rivals until plug-in or electric models are introduced.

“We were the first to offer RDE2 compliant engines on those products, so we were ahead of the curve on that but we don’t have plug-in options in the sedan space right now, so we do lose a bit of the market. But, when you look at the broader trend, there is a strong move towards SUV and crossover vehicles. Having plug-in hybrid on the E-Pace and F-Pace will increase their appeal, with both offering BIK from 10%. So the net gain is arguably bigger.”

However, petrol and diesel-powered models continue to perform well in the personal contract hire space, where Jago says many of the brand’s customers are using car allowances in lieu of taking a company car and choosing models such as the Evoque.

Across all channels, Jaguar Land Rover’s sales from contract hire and leasing have increased in size from 60% to 75% in the past 12 months.

Now the BIK position is more attractive on versions with a plug-in hybrid engine, Jago believes more people will opt back into company car schemes to get the model they want and push that figure even higher.

He says: “We will see Land Rover rapidly increase its true fleet sales now with the six plug-in hybrid offerings, particularly with Evoque and Discovery Sport, which are in the sweet spot in terms of that core user chooser in the £40,000 to £50,000 bandings. We can really start to access that market heavily because we’re now competing on more direct terms. We are getting more competitive than a lot of our German counterparts, which is the first time we’ve been able to say that for a while on BIK.”

Jago is keen to demonstrate the new models to customers, but the coronavirus pandemic has affected plans to host test drive events and get people into showrooms.

He explains: “Between us and our retail network, we strongly encourage test drive activity, more now than ever before. A lot of this user-chooser market is conquest business for us and we want those drivers to experience our products and put us higher on their consideration list than perhaps they have in the past. So, access to our central test drive fleet and the retailers is a key part of that strategy.”

During the first national lockdown, JLR loaned its demonstrator fleets to key workers. However, Jago says his team remained operational throughout that time and were therefore able to win some key business as a result.

Moving forward, he anticipates that the field sales team will continue to operate in a more virtual manner to minimise the time lost travelling between appointments. This also supports his desire to speak to more fleets and increase the brand’s prominence on choice lists, by enabling the sales team to spend more time talking to customers.

The new Jaguar F-Pace has broken cover with a choice of diesel and petrol engines, as well as mild and plug-in hybrid versions.

Jaguar has updated the E-Pace with a mild-facelift, new interior and more efficient powertrains.