Radius lines up a leading role in global telematics 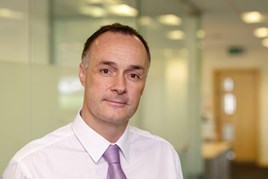 It started with a single fuel card transaction, but ended up a billion pound business. Bill Holmes tells Gareth Roberts how technology is transforming his service to fleets

Twenty-six years after UK Fuels recorded its first transaction at a truckstop in Birmingham, technology has transformed the fuel bunkering business into a multi-national fleet services provider.

Today, UK Fuels is a division of Radius Payment Solutions, which has more than 1.5 million active fuel cards across Europe and Asia.

It also tracks in excess of 35,000 vehicles across five continents, employs more than 750 staff in 13 countries and turned over £1.87 billion in the last financial year.

Company founder and Radius CEO Bill Holmes puts the company’s rapid rise down to its focus on innovation. “We’re constantly trying to push the boundaries,” he says, while demonstrating the latest version of its web-based portal, Velocity, on a 70-inch-plus touchscreen at the company’s headquarters in Crewe. “We’re making our existing products better and bringing new, more innovative ones to market. Technology and innovation, and how we interact with customers, is a massive focus for us.”

To help deliver this, Radius opened a new technology centre in the heart of Manchester’s new business and innovation district in May last year.

The office became an additional hub for its development team, who are responsible for building and developing its fleet technology, as well as its web and smartphone app-enabled software.

“We’re transitioning from being a fuel card business to being a technology company,” says Holmes.

That journey began with the launch of its web-based platform, Velocity, five years ago. Continuously developing both the content and usability of this system is seen as critical to the future of Radius.

It already has more than 30,000 regular users, which is growing monthly as customers convert to using it for their normal administrative weekly requirements such as card ordering and invoice collection.

The system offers features such as real-time transactional text alerts, integrated fuel and MasterCard management reporting and a drag and drop function for customised cost reports.

The company already has an established footprint in the European market, with offices in several countries, including France, Germany, Ireland, Italy and Spain. But, Holmes is keen to grow the business further, both in the UK and internationally.

“We’ve just started in Asia, in Singapore,” he says. “We’re about to start in Malaysia and then we’re going to the US in early 2017.”

He continues: “We want Velocity to be a shopfront for us, where our products are available. It’s about servicing customers.”

A central philosophy behind the way it develops the system is one of continual improvement, driven around a monthly release cycle.

“We’ve new app updates being released every three to four months and with Velocity we’ve got a five-week release cycle,” says Holmes. “That means every five weeks we’re updating Velocity with new features or improving functionality.”

Radius has been strengthening its in-house software development team during the past 12 months to allow it to maximise the additional functionality it can achieve each cycle. The aim is to give customers the best service possible to help them manage their businesses efficiently and effectively.

However, Holmes has also found inspiration for product development from a new generation of entrepreneurs. For the past two years, he has been a judge for the Entrepreneur of the Year competition run by professional services firm EY (Ernst & Young). As a former winner he was asked by EY to get involved.

Holmes says it gives him a privileged position to see how technology is being used and developed. “It’s been a real eye-opener,” he admits. “I’ve been in business for 27 years and when we got going there was no internet, but these new businesses are embracing technology like nobody else. It’s really influenced my thinking and what we need to do next.”

The launch of Kinesis, an in-house telematics product, demonstrates the company’s commitment to technology. It has also further enhanced the functionality of Velocity, enabling the business to target car, van and HGV fleets with a new product that fully integrates fuel card and telematics data.

Typically, fleet operators will receive separate data feeds from their telematics system and fuel card provider. But by channelling information from its telematics device into Velocity, with an existing fuel management account, the company can now provide a clear picture of fuel spend and vehicle activity in one streamlined, real-time solution.

Radius offers a range of fuel cards from major oil companies, as well as its own Fleetone card, through its UK Fuels arm.

Holmes says: “Telematics is a massive opportunity and it sits perfectly with fuel.”

Fleet managers can monitor their vehicles on any web-enabled device. It offers customers: a live map highlighting vehicle and driver locations; journey history over a self-selected time period; and driver performance through four reports – speeding, harsh acceleration, harsh braking and idling – with drivers receiving an individual score against each criteria which is then amalgamated into an overall driver score. Vehicle performance, which sees fuel transaction data fed into the system to deliver mpg information, is also provided.

The web-based functionality was developed in-house, while the hardware was provided by telematics specialist Matrix.

The majority of fleets self-install the telematics unit, which plugs into a vehicle’s on-board diagnostic port. Alternatively, the company arranges for an engineer to fit the unit at a cost of approximately £50 dependent on the number of vehicles to be equipped.

Earlier this year, Holmes told Fleet News he wanted to have “tens of thousands of telematics units in vehicles within the next two-to-three years”.

A few months later and he has already achieved that milestone, thanks in part to the acquisition of another telematics business.

Radius bought telematics provider Trackyou in October, in a deal that added more than 20,000 vehicles to its rapidly growing tracking business, giving an overall tracked fleet in excess of 35,000 units.

Holmes says: “It was an opportunity to grow the business, but they are also specialists in the public sector and with bigger fleets.”

Trackyou has more than 15 years of experience in providing telematics tracking solutions and also offers some
hardware features that could help Radius bring new developments like engine fault reporting to the Velocity platform.

“Radius has acquired an exciting technology company with an outstanding track record of research and development in telematics,” says Holmes.

“We feel our brands and systems align really well and by acquiring Trackyou, we’re confident we can offer one of the best range of telematics solutions on the market.”​