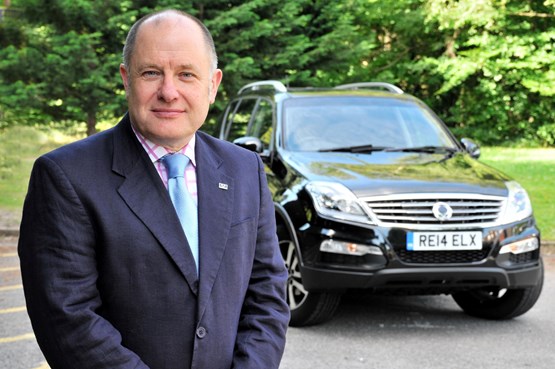 It’s South Korea’s oldest car manufacturer, with a history stretching back more than 60 years, yet in the UK it is hardly known, trailing compatriots Kia and Hyundai by a considerable distance.

SsangYong’s registrations have hit four figures just four times over the past decade, although 2015 will be its best-ever annual performance.

While most of those sales have been its rather heavy-duty vehicles, in recent years the company has moved into rugged-looking MPVs, SUVs and pick-up – what it calls ‘lifestyle utility vehicles’.

Its corporate slogan, if not particularly catchy, is straight to the point: ‘no-nonsense vehicles from Korea.’

The company’s wider reputation and brand awareness have been somewhat handicapped by two things: a name that does not trip easily off a non-Korean tongue, and some frankly rather ugly-duckling vehicle styling.

The inscrutable company badge does not exactly help either, said to represent both hands around the world, and also dragon’s wings: the name SsangYong derives from the Korean for ‘two dragons’.

Nevertheless, SsangYong is riding (relatively) high in 2015, and will the end the year with twice as many registrations as it did in 2014. UK bosses have agreed a target of 6,000 or more for next year, and optimistically predict more than triple that by the end of the decade.

Fleet is playing a bigger role in the sales mix: retail historically accounted for 90% of registrations; this year the proportion has fallen to 60%. Remove rental and captives, and SsangYong will sell around 850 cars to fleet and Motability, up 140% on 2014.

It has cars to appeal to utilitarian fleets looking for cost-efficiency, although its engines are behind the curve in terms of performance and fuel consumption. However, it’s the dealer network that requires most work if fleets and leasing companies are to be convinced to invest in the brand.

SsangYong is addressing this issue. Four years ago, it had just 37 UK dealers. That has now risen to 60, with more being recruited and a plan to reach more than 70 during 2016.

The UK distribution company remains tiny though, with just 14 permanent staff at Koelliker UK, headed by the energetic and ebullient CEO Paul Williams. He has had the role for eight years and is something of an expert in Asian manufacturers, having previously been managing director of Kia Motors UK, MD of Daihatsu UK and sales and marketing director at Mitsubishi Motors UK.

Williams feels the time is now ripe to put more time and resource into targeting the corporate sector.

“We spent so many years being abused and a laughing stock for selling the ‘ugliest car in the world’ with our Rodius, and yet the people who bought it loved it,” he says.

“So with the new model two years ago we renamed it the Turismo, and that has been a positive move forward. We have a good range with the Rexton, Turismo, Korando, Korando Sports and now the Tivoli. With this line-up and new models coming we have an aspiration to sell 20,000 cars a year in the UK by 2020.”

To put that into context, it would put SsangYong on a par with the likes of Dacia, Jaguar and Mitsubishi.

Williams recognises that fleet will need to play a major part in SsangYong’s growth aspirations, but he is candid about the scale of the task.

“We are not on people’s lists,” he admits. “We have to get ourselves on the radar with people like Lex, and we have been working very hard behind the scenes on that.

“We have always been a retail brand, with fleet very low at 10% of sales and Motability running at 6-7%. We need to up that; we’re working on it.”

The five-year warranty will help to reassure fleets but Williams is also striving for higher brand awareness by finding ways to appeal to younger customers from a wider demographic. The average age of a SsangYong buyer is 58, he says, compared with the average age of new car buyers generally at 54.

“We are trying to attract a younger audience in the UK, and also a female audience,” Williams says. Sport sponsorship is one possible way to achieve that.

“Lots of girls are now playing soccer, and there is a big trend towards women’s football in the UK,” he adds. “The most successful women’s football club here is Chelsea, and it happens that the star striker is a Korean lady.

“So far SsangYong has no brand ambassadors, like other car companies do. Not yet anyway. We will.”

The fresh impetus in SsangYong’s business is being driven by the arrival of its latest car with a wider mainstream appeal than previous models, the Tivoli.

SsangYong’s global president and CEO Johng-Sik Choi recently unveiled the new halo version, the Tivoli diesel 4x4, and spoke to Fleet News about his strategy. It includes a surge of new models, arriving at a rate of one car a year, every year, until the end of the decade.

The Tivoli, he says, will play a major role, as “a new start towards the future”. It is a pivotal car in SsangYong’s history, as the first all-new model since the company was bought by Indian industry giant Mahindra and Mahindra five years ago, rescuing it from bankruptcy. The plan is for the Tivoli to spawn a new family of models. They will include other variations on the Tivoli theme, using the same base platform, such as a more macho SUV, a convertible and a longer-wheelbase model.

“Tivoli is giving us some momentum,” says Choi. “It has been developed specifically for the European market. The styling and design we did with a lot of consultation in Europe, to reflect the favour and taste of European consumers. SsangYong in Asian countries has always been good but in European countries it is much more difficult.”

Future planning will see SsangYong centring its production on three main platforms: one ladder chassis base for the Rexton pick-up, and two monocoque constructions for the Tivoli and Korando families of cars. Choi says the aim is to be a “most innovative and respected” company.

“Although we are a small player it is very important that we have respect. That must be our brand value.”

Last year SsangYong produced 160,000 vehicles at its South Korean factory. The target is to ramp that up to 200,000 by 2018, with a view to entering the US market. The main production plant in Pyeongtaek, South Korea, has a capacity of 250,000 annually while it also has its own engine factory, with a capacity of 400,000 units.

It underlines the company capability to rapidly develop new cars and new engines which SsangYong hopes will appeal to more buyers, including fleets, in the UK.