TCH Leasing: ‘We look for clients that want the personal touch’ 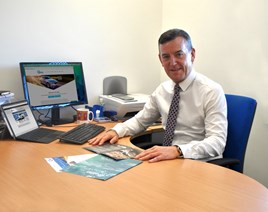 FN50 contract hire company TCH Leasing has been a model of consistency over the past decade. Save for a brief dip to 3,500 vehicles in the immediate aftermath of the 2008-09 recession, its risk fleet has generally hovered around the 4,000 mark.

Growth had not been a priority for the TC Harrison dealer-owned business, according to managing director Mark Hammond; profits and customer service were.

“The family never wanted to grow the fleet for the sake of it,” he says.

“They want a leasing division that is profitable and safe; they don’t want to jeopardise the rest of the group.”

Nevertheless, two years ago he put in place a five-year plan to expand the business to a risk fleet of around 7,000 vehicles. It currently sits at 5,500, with around 300 customers.

The narrative for the TCH fleet is one of variety. It funds everything from cars to vans to JCBs; counts companies from one to 300-plus vehicles as customers; has a private to public sector split of 3:1; and operates both sole- and multi-supply contracts. It also offers salary sacrifice.

The company is looking for growth in its car and light commercial vehicle fleet but says it has no defined target audience, at least not in terms of fleet mix.

Ken Buckley, head of sales, explains: “We look for clients that want the personal touch. They have often bought on price, aren’t happy and feel that they aren’t important to their supplier anymore. We want to be their one-stop shop.”

Buckley claims that fleets with 80-200 vehicles tend to fall into a void with many larger contract hire companies. “They have trimmed back staff and put their focus with the larger customers,” he says.

Number of customers: Circa 300

“Their service has been diluted for smaller customers. We want those that want to go back to a more traditional style of support and service, not a hunter-farmer regime.”

Hammond believes there is a growing pool of fleets looking for a funding partner with this type of outlook after some were stung by the decisions they took during the recession.

“They suffered because they bought on price but as we come out of that period they recognise that they have to spend a bit more for the right service and this is where we win,” he says.

Buckley says: “Once we went through the pains of setting it up, we decided that it was simple to do for 6,000 employees or 60 employees. The scheme and the benefits are the same.

“The support from the manufacturers is not restricted to size – we have generic terms that are in excess of retail terms. They realise that it’s not retail substitution; it’s getting people out of used or old cars and into new cars.”

TCH has 148 live schemes with 500 vehicles, while its potential audience sits at 100,000 employees. More companies are being signed on a near-weekly basis.

However, Buckley believes salary sacrifice is still a “fairly well hidden secret”, even in the public sector. “We are scratching the surface,” he says.

Meanwhile, he dismisses concerns about the Government looking at the tax regime surrounding salary sacrifice, pointing out that it benefits from the benefit-in-kind paid on cars: “We think the Government might hit laptops and phones where they are losing revenue, but they are at a positive with cars.”

TCH’s big focus this year is the introduction of a new software system via third party supplier Drive Software Systems. The move is in response to a growing demand from customers for robust management reports and direct access quotations.

“It will give us a better front-end product, especially for larger customers,” says Buckley. “They will be able to manage their drivers and have their own reports.”

“However, many don’t use them because they want the personal service from us.”

This is particularly the case for smaller customers, typically sub-50 vehicles, without dedicated fleet managers. “They don’t have the expertise – it’s often someone linked to the finance director or HR director,” Buckley says.

“They are there to do the basics and they need an organisation that can help them to manage their fleet and its costs. If they pick the right partner, fleet can be an ordering process.”

Buckley and Hammond point to service as one of TCH’s key strengths. And it’s one that is growing in importance in the face of a new challenge from manufacturer-owned leasing operations.

“Their encroachment is one of our risks,” Hammond says. “As they try to shift metal, they do it through their funding arms.

“It’s a moving metal exercise, which is devaluing some brands and will have residual value implications over the medium-to-long-term.”

Dealer group ownership has given TCH Leasing financial stability, particularly during the recession when a number of funding backers exited the market.

Hammond has full autonomy over the business which means he can make quick decisions.

“It happens on the day, not weeks later,” he says. “That helps the ease of dealing with us. It allows us to be flexible and tweak things to fit the client.”

TCH Leasing does everything in-house, bar accident management – “too difficult”, says Ken Buckley – which is outsourced to FMG.

Rental was a recent addition. Two years ago the company took the decision to set up a rental desk after previously offering an ad hoc service.

“We always offered it as a service in the background,” says Hammond. “We satisfied some needs but they didn’t see us as someone that could supply all their needs.”

He recruited Annie Green to head the department and most of TCH’s customers now use the service. From nothing, the business will turn over £1.5 million this year.

“There is increasing demand for it; with new employees, companies are more cautious of providing a lease for three years. Instead they are using rental or flexi-lease,” says Hammond.

Cars as a benefit: “Some industries are struggling to recruit good quality employees. They are looking at how they can attract the best and the vehicle is the big ticket.  We expect to see policies open up a bit more.”

Mobility: “It’s only being spoken about in leasing circles, not at a client level. It’s one for the future.”

Personal contract hire (PCH): “We will see it growing more and more rapidly. People are happy to have a vehicle for three years and hand it in for their next car. There might be a period of readjustment if it takes used car buyers out of the market and into new cars.”

End of contract charges: “We don’t rip people off; we will make a fair charge, it’s not a profit centre. There is anecdotal evidence of fleets suffering from high charges if they pay a low upfront price on the lease.”