YAS has a goal of achieving zero emissions by 2050. But getting there might entail building a frontline ambulance from scratch. Andrew Ryan reports

As far as challenges in the fleet sector go, replacing diesel frontline ambulances with zero emission models must rank among the most difficult.

The vehicles of Yorkshire Ambulance Service (YAS) NHS Trust weigh up to 5.5 tonnes, travel between 200 and 800 miles a day, respond to emergency calls instantly and power sophisticated medical equipment.

These demands cannot be met by any of the electrified vehicles currently available, making diesel still the best – nay only – fuel choice for the organisation.

It is a situation which frustrates Alexis Percival, environmental and sustainability manager at YAS, but one she is making great strides towards solving.

“As an NHS organisation – or any public sector organisation – if you are running a cancer-laden diesel vehicle you have a moral obligation to eliminate that from your fleet, because you are contributing to the deaths of 40,000 people in the UK each year,” she says.

“A public sector organisation should not be killing anybody.”

Her solutions to eliminating diesel emissions are ambitious and wide-ranging.

“We are looking to see if we can get some funding through an Office of Low Emission Vehicles (OLEV) grant that is coming up for specialist vehicles and actually build a zero-emission, frontline ambulance from scratch,” says Percival.

“We are working with all the technologies, innovators and vehicle manufacturers to see if we can build it based on electric technology and then, on top, put in hydrogen fuel cells.” 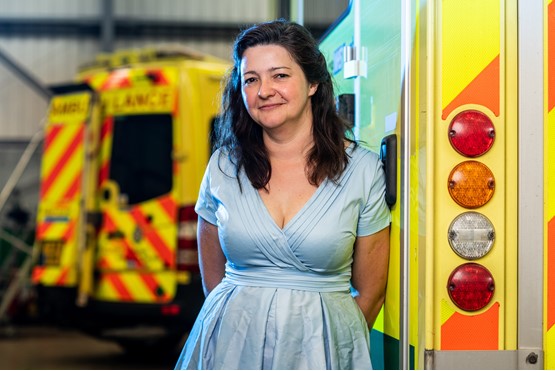 This forms part of Percival’s ambition for the fleet to become zero emission by 2050, and although the aim is high, her undoubted enthusiasm, drive and recent successes demonstrate this is eminently achievable.

YAS, which has a fleet of 1,200 vehicles, has made significant strides in developing and adopting zero emission technologies.

It introduced two hydrogen-electric small vans 18 months ago and, earlier this month, it became the first ambulance service in the UK to operate a hydrogen-diesel vehicle.

One of the key partners in the initiative is the Ultra Low Emissions Mileage Company (ULEMCo), which, as part of the Innovate UK-funded HyTIME (hydrogen truck implementation for maximum emissions reductions) project, worked with YAS to develop the hydrogen-diesel patient transport vehicle.

This saw ULEMCo, which in March delivered the first hydrogen dual fuel road sweeper to Aberdeen City Council, remove one of the seats from a Peugeot Boxer patient transport vehicle and replace it with two hydrogen fuel cells.

The technology injects hydrogen into the engine so it is burned before the diesel, leading to a 70% reduction in diesel use.

“That instantly gives you a reduction in carbon emissions and a 50% -to-60% reduction in NOx, so we have ended up with a cleaner running vehicle that historically did about 200 to 250 miles to a tank but can now do 400 with hydrogen being a major contributing aspect,” says Percival.

“If the hydrogen fails it just switches back to diesel, so you would not lose a vehicle at any point.”

The vehicle is initially with YAS on a one-year trial, but Percival expects this will be extended.

It has joined two vans already on YAS’s fleet which use hydrogen: both are Renault Kangoo ZE electric vans which have been converted by Arcola Symbio to run with hydrogen range-extender technology.

Funding came from an OLEV grant. 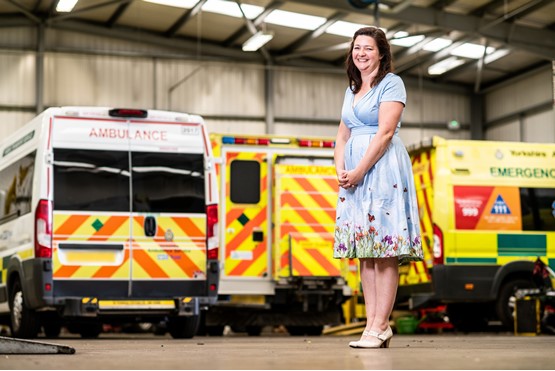 The hydrogen technology has doubled the range of the pure-electric vans to 220 miles. The recharging time from the battery ranges from four hours to 12, dependent on the power supply, while refuelling takes three minutes at a hydrogen station.

All three of the hydrogen vehicles operate in south Yorkshire so they are close to ITM Power’s hydrogen fuelling station in Rotherham.

These vehicles are just the latest ground-breaking initiatives Percival has introduced to the fleet since becoming the first environment and sustainability manager in the UK’s ambulances services when she joined YAS in December 2009.

Back then she was restricted by technology – “I was looking at how we could design a frontline electric ambulance in 2010, but the technologies just weren’t there, and the range of 20 to 30 miles wasn’t going to achieve anything” – but was still able to introduce a number of innovative initiatives.

That year, YAS became the first ambulance service in the UK to participate in the Carbon Trust Carbon Management Programme.

It was also able to significantly increase the fuel economy of its frontline ambulances by working with Leeds University on a ‘green ambulance challenge’.

This coincided with the service’s switch from ambulances based on box vans to van conversions and saw engineers use aerospace industry techniques to design hi-tech, low drag light bars and cut 800kg from the vehicle’s weight through innovative storage.

“Moving to the lighter vehicle saw us increase fuel economy from 16mpg to 20mpg,” says Percival.

“Putting the lightbar on increased that by another 1mpg, so we went from 16mpg to 21mpg, a big hit when you are driving 14 million miles a year.”

Other initiatives included fitting solar panels to the roof of more than 100 ambulances to keep their batteries charged, using more efficient tyres to increase fuel economy, fitting LED lighting inside and outside vehicles and adopting telematics.

A ‘Make Ready’ programme reduced the carry-on weight of vehicles by cutting the amount of equipment stored on them.

Soon after Percival joined YAS, the trust set itself the target of reducing overall CO2 emissions by 32% by 2015.

“We hit our CO2 emissions reduction target with our estates, but because the technology hasn’t leapt on too fast in our fleet department, it was really difficult,” she says. 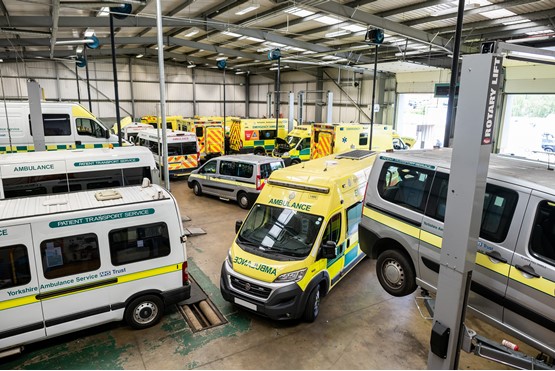 “Most of our fleet is more than 3.5 tonnes and the low-emission van market hasn’t been there, hence the reason we have been looking at alternative technologies to improve our fuel efficiency.”

At this point in the interview, Percival produces her electric vehicle strategy. It’s an immaculately drawn chart, but the sheer number of arrows connecting various factors such as YAS, councils, suppliers, other stakeholders, EV charging infrastructure requirements and vehicle technology demonstrates just how complicated the widespread adoption of EVs will be for the organisation.

However, she doesn’t seem overly daunted by the challenge, with YAS already having installed charging points at a number of its sites.

“We have the potential for parts of our fleet to go fully electric,” says Percival. “We haven’t done it historically because of the range of EVs, but, in some cases, the range is there now and we can consider it.

“For example, our fleet of Škoda rapid response cars needs a range of 100 to 150 miles, maybe 200 which is on the cusp of the current EVs. But a lot of the time they are sitting with their engines running, so, potentially, they could be plugged in at those times.

“I’m working with partners like hospitals and care homes to see how we can interlink and I’ve got various meetings to find out how we can have electric charging points at their premises.

“So whether it’s patient transport to the hospital or A&E, the vehicle pulls up there and could potentially be there for seven or eight hours, and that length of time charging would be enough to carry on for the rest of the shifts.

“Getting to that point is my electric vehicle strategy. It’s very complicated as you have to look at EV charging and infrastructure for the business cases to go with the vehicles, which is what any normal fleet would do, but then we have to look at every single element of our fleet.

“What is the energy demand for the equipment we carry? What battery size do we need? When and how long does it take to charge, and do we need range extension, which ties in with the hydrogen as well.”

As well as the fleet department, Percival also works with procurement and estates to reduce YAS’s carbon emissions.

“I’m looking at travel plans and what we can do to get staff on their bikes, car-sharing policies and developing a carbon strategy for next five years,” she says.

“I’m also working on car park designs, how we can make our ICT (Information and Communications Technology) system more environmentally friendly, and even designing a garden for Doncaster ambulance station.

“We are putting in a species-rich hedge, some water features, areas where anybody who has had an incident can go and chill out, and lots of wild flowers.”

It is this wider role which helps fuel her excitement of the potential of vehicle-to-grid (V2G) technology.

“I think vehicles of the future are going to be the power source of buildings,” says Percival.

“We’ve got 1,200 vehicles that could potentially be used and if we get it right with solar panels and a system that integrates with hydrogen as well, then we could go off the grid.

“You could also have a whole business solution for charging your vehicles, charging your building battery storage, and then creating hydrogen on a smaller scale because, as we move away from diesel, what sort of bunkered fuel would we have? It’d be battery storage and hydrogen.” 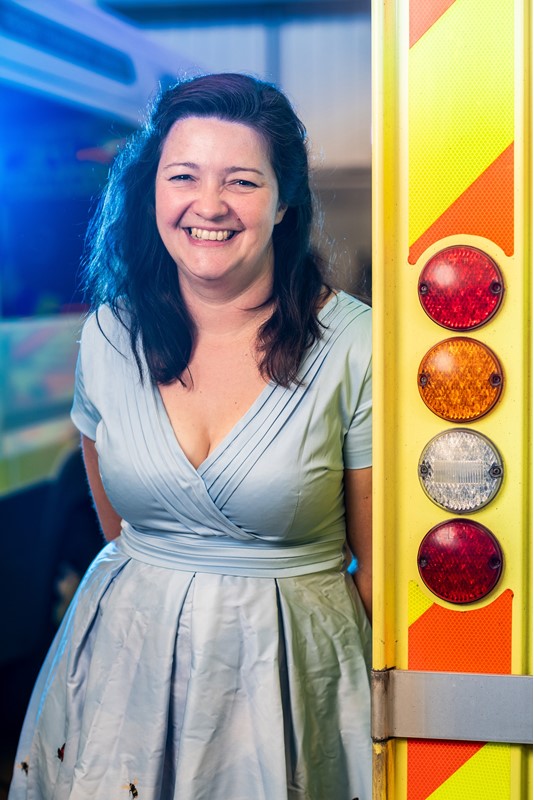 Environmental passion is ‘penance’ for driving fuel-guzzler around world

The environment is clearly a passion of Alexis Percival.

She has worked in the environment for more than 20 years, with her earlier career taking her to Mozambique, Australia and Brazil.

So where does this drive come from?

“I think it’s my penance,” she jokes.

“I once drove around the world in an ex-military ambulance which was very fuel inefficient – about 14mpg.”

Outside work, Percival is a co-coordinator of the Green Drinks Leeds networking group, where anyone interested in environmental matters can go along and find out about a variety of subjects.

She is also doing a ‘plastic-free year’ which sees her reducing the amount of plastic she uses.

“Sadly, I missed the Blue Planet 2 when it was on the television and to be honest I’m glad I did because the stuff I’ve seen on Facebook about the damage plastics are doing is just horrendous,” says Percival.

“I’ve got three-year-old twins that are getting loads of things that come in plastic. When you read up about it you realise that it’s not just the plastic, it’s about what the plastic actually does – some of it contains an awful lot of toxins.

“So I thought about what I could do to change my own habits, and every week I go through a type of product and write a blog about what I’ve done to reduce my use of plastic. Among the recent things I’ve looked at are sun-cream, plastic containers and coffee cups.”