Ricoh UK: 'Our main priority is our drivers'

Stevens joined Ricoh in 1987 as a warehouse supervisor and, over the past 30 years, has progressed from shunting spare fleet vehicles in storage to looking after the entire fleet department – a role he took up a year ago. 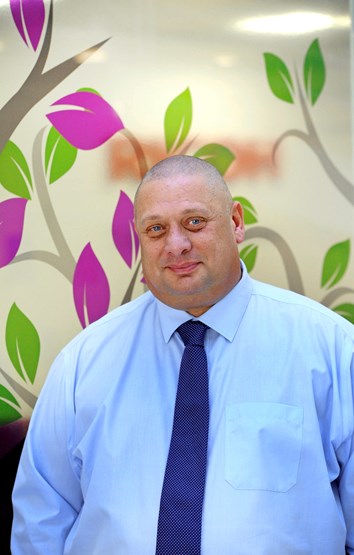 “There were lots of new vehicles coming in and out, and my interest in cars grew. I kept a lookout for positions in fleet, and in 2002 I was appointed as fleet administrator.”

Stevens had established a reputation within Ricoh for focusing on the everyday needs of its drivers which was recognised a year ago with promotion to the role of fleet controller for UK and Ireland.

“When I started in the management role, my main goals and objectives were to keep the costs of our hire vehicles down to a minimum and to have more of a presence with our drivers,” he says.

“I was used to dealing with drivers on a daily basis and felt that some of the email communications and telephone calls could be replaced with a face-to-face talk.” 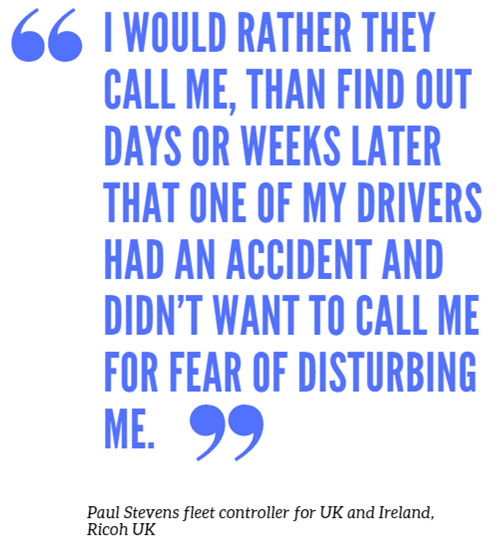 Driver relationships continue to be his biggest priority – he is available around the clock, seven days a week, especially around the busy Christmas period.

“Our main priority is our drivers. We have hundreds of them working 365 days a year, and Christmas day is part of that.

"As time has gone on, more of our clients are working throughout the holiday season which means more of our drivers will be on the road,” he says.

“Our phones are always on, and Christmas doesn’t change that. I personally took two calls on Christmas day from drivers that were unfortunate enough to find themselves in an accident. 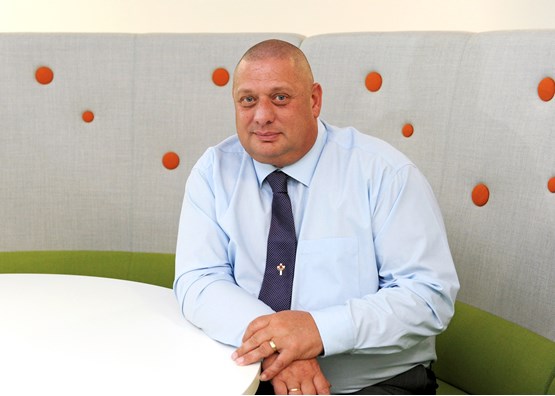 "They have the policies on what to do if they have an accident, and we have out-of-office-hours teams that will look after them and get them mobile.

“Most of the time, people just want to talk to someone about what has happened and double check they are doing the right thing.

“I would rather they call me, than find out days or weeks later that one of my drivers had an accident and didn’t want to call me for fear of disturbing me. That isn’t what it’s about for me.”

“My aim for the new year is to attend more team meetings with our drivers and hopefully be able to have question and answer sessions with them to find out about any issues they may be facing,” he says.

Ricoh has undergone a total business restructure over the past couple of years which has resulted in the separation of fleet and travel (his predecessor did both) and a change of department from finance to supply chain.

Despite the changes, Stevens continues to work closely with the travel team.

“We still sit on the same floor as travel and liaise closely with one another,” he explains. “Our biggest collaboration is around hire cost and how we can keep that to a minimum.”

Stevens has targeted a culture change around hiring rental cars with Ricoh’s drivers introducing new policies that have seen costs fall by 75%. 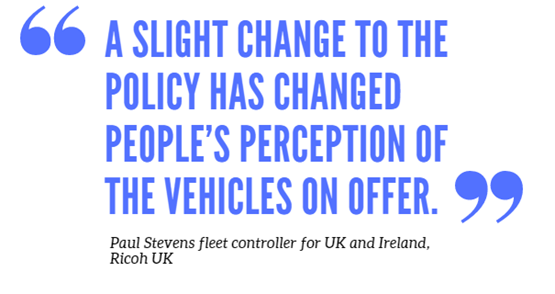 They include encouraging them to book a service in advance to receive a free courtesy car, instead of relying on hire vehicles.

Coinciding with the reduction in fleet size has been growth in the grey fleet. Eighteen months ago, Ricoh had 559 cash takers; its grey fleet now stands at 757 employees.

Stevens is now looking to reverse the trend, bringing staff into the company scheme.

“Three years ago we changed the policy for engineers and lower-grade employees, enabling them to opt out. Many went into running their own car,” he says.

“That is starting to gradually turn around as we now offer more attractive vehicles with good tax benefits for our drivers. Our leasing partners also did a lot of work informing drivers of the benefits.”

While leasing partners promote the benefits of the company car policy, Stevens has added Renault and Nissan SUVs to the choice list – in response to driver feedback.

“Due to the kit some of our engineers carry, their choices on the company car scheme were either a van or a people carrier,” Stevens says.

“While they were fit for purpose and the right vehicle offering for the time, many drivers felt as though they were driving their dad’s car.”

Consequently, he introduced the Nissan Qashqai and Renault Kadjar. The uptake has been considerable.

“We have slightly changed our mindset around our company car drivers. We used to have a strict policy for company cars but it was lenient for grey fleet – they had freedom to pick any vehicle as long as it was fit for purpose,” Stevens says.

“After liaising with managers to assess how much stock drivers carried each day, we discovered most could actually have a much smaller car. We now have a new policy for our engineers with a bigger selection of smaller cars.

"If they want a hatchback then they can have one, provided it is suitable. Changing the policy was actually quite an easy thing to do but we had never really looked at it properly before. A slight change to the policy has changed people’s perception of the vehicles on offer.” 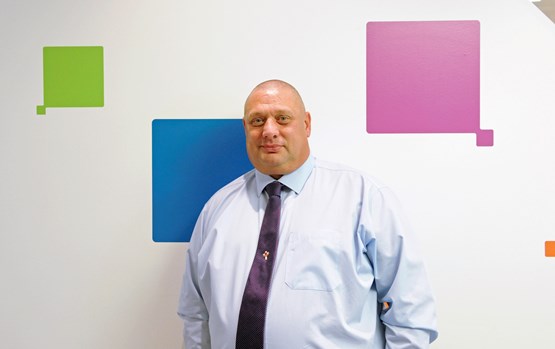 Ricoh has a strong environmental focus – the nine hybrids in its fleet are working well; however, it has temporarily raised its CO2 cap from 134g/km to 139g/km in response to the new Worldwide harmonised Light vehicle Test Procedure (WLTP).

Stevens explains: “Manufacturers will do a lot of the work for us to drive those CO2 levels down so we just need to keep on top of it.

"We have upped the cap because of the new WLTP testing and are awaiting official confirmation on how the tests will work and if there is any increase.

“If 139g/km is too high we can drop it back down, we think it will be enough to get the right vehicles, but it’s something we are monitoring all of the time.” 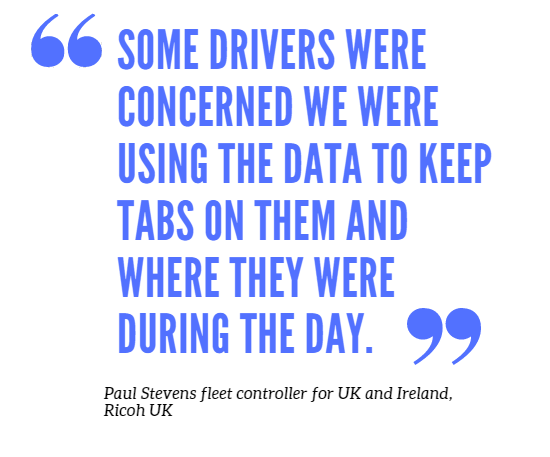 Ricoh has been undergoing telematics trials to assess the possible benefits to the fleet. So far, the biggest positive has been on accurate mileage reporting – business miles have fallen by 22% with a corresponding rise in private mileage.

“We are taking part in a four-year trial with Ctrack, due to end in May 2019. Telematics was put into a high percentage of our vehicles to see if it could bring any savings,” says Stevens.

“Part of the trial process has been to use it predominantly as a mileage portal, and then to track driving habits such as harsh braking. We are currently having internal work done to link the telematics with our payroll system.

“Drivers have a fob in the car and press one button for business and another for private mileage. As long as they have pressed the right button, mileage datawill automatically go back to payroll.

“This takes the workload off the drivers and removes the pressure to calculate their mileage every week.”

However, there have been challenges, as drivers remain sceptical about how Ricoh will use the data.

“Some drivers were concerned we were using the data to keep tabs on them and where they were during the day,” explains Stevens.

“However, we are only assessing a limited range of data, as per the trial agreement made with Ctrack.

“We pick up data about harsh braking and speeding, and this feedback is only given to drivers to make things safer for them.

"It also helps to suggest if any additional training is needed through our driver risk partner Driver Intelligence.”

Stevens adds: “We have had a lot of changes to the business over past 12-18 months and it is difficult to work out whether or not the savings we have made are totally down to telematics.

"Either way, since telematics has been installed there has been an improvement in driving habits.”

A figure Stevens is especially proud of is his drivers’ overall risk rating as assessed by Driver Intelligence.

The figures show that 90% of Ricoh’s 1,980 drivers (including agency staff, temporary workers and anyone in the business who predominantly works in the office but may need to make the occasional client visit) are fully compliant with its risk policy, which Driver Intelligence helps to manage.

“Our overall risk rating is measured by licence checking, accident rates, online risk assessments and knowledge of the company policy – alongside whether documents such as mandate renewals have been submitted,” says Stevens.

He aims to push that figure to 95% by the end of this year, and hopes that new software and outsourcing will help to achieve it.

He says: “One of the recent changes we made was to the process of submitting a driver’s licence mandate. It used to be a manual submission and we were constantly chasing people up.

“Six months ago we introduced software called EchoSigns, which now sends the driver mandate forms electronically and allows digital signatures. It has sped up the process for the drivers.

“Driver Intelligence will also chase drivers for documentation and licence checking, and because they are a third-party company, drivers tend to respond promptly.

"This has taken the strain off us, as we no longer have to chase up documents or call up the DVLA.

“Our target is achievable and as long as we continue to work closely with our partners then we should be well on our way to getting that extra 5% of improved risk rating by the end of the year.”

Twelve-week project shows company how it could reduce its fuel bills by £350,000 a year