What started with a Plugged-in Fleets Initiative led to a roll-out of electric vehicles to all frontline cars. And vans are next.

When your fleet operates exclusively within the M25 and reports to the mayor of London, it is difficult to ignore the environment and, in particular, air quality. Like it or not, you will need to start considering options such as electric vehicles.

For London Fire Brigade, electric vehicles (EVs) might seem a little impractical due to their limited range and charging requirements. However, the organisation has worked hard to find a practical solution.

By the end of the year, its entire liveried frontline car fleet will comprise plug-in hybrid and range extender vehicles – the result of a managed process to introduce EVs.

Head of sustainable development Nicole Fletcher has been driving progress at the brigade since 2012, which began with an Energy Saving Trust (EST) desktop exercise as part of the Plugged-in Fleets Initiative to produce a cost benefit analysis for EVs.

“At the time, the cost difference to conventionally fuelled vehicles wasn’t close enough for us to consider,” she says.

There were also other factors that meant an EV roll-out was not feasible – Fletcher cites a charging infrastructure that was not mature enough. However, in 2014, the brigade spotted an opportunity to make progress in this area.

“We were able to apply for charging point installation funding from the Office for Low Emission Vehicles (OLEV), which was encouraging the installation of these facilities on public sector estates, for use either by staff or the public,” Fletcher says.

“We wanted to get those charging facilities into as many sites as possible, so when we had EVs in they were capable of being used as widely as possible, making it a lot easier for us to adopt these technologies.” 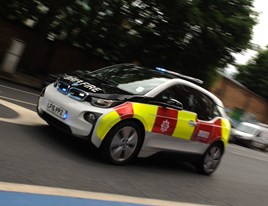 A follow-up to the original EST exercise took place in March 2015, using journey profiles and actual mileages from vehicles.

“We were finally at a point when the cost of the vehicles and the technical capability of vehicles on the market met our minimum requirements,” says Fletcher.

The vehicles are used for operational purposes, as pool cars, for attending calls and for use by station managers.

“But because of what came out of that report, and the fact our operational cars were due for replacement, and the technical advances in vehicles, we put forward a request to our authority to replace 57 vehicles with electric range-extender or plug-in hybrids,” says Fletcher.

In total, 52 BMW i3 range-extender models will join the five existing EVs by the end of the year, replacing Vauxhall Astras.

“It may seem like a minor thing, but the ability to add bluelights to the roof was not there when we first trialled the car, so it wasn’t suitable for our use,” says Fletcher.

However, BMW responded to the brigade’s tender for full fleet roll-out and, having found a solution, the model was back in the running. The vehicles were purchased outright, and will remain on fleet for around five years, covering an average of 7,000 miles a year.

Bluelights and systems are installed by the brigade’s maintenance partner, Babcock Critical Services, which is providing half-day EV training as part of the vehicle handover.

“Our vehicles may not be driven as much as other organisations, but we need the availability to be high – the vehicles need to be there when we need them, with a sufficient range,” says Fletcher.

Trials of demo vehicles from manufacturers had been undertaken across the force in previous years, with Fletcher saying this helped to combat “a level of scepticism” from staff.

“We had a two-month trial with operational staff before the roll-out, and the range being offered by these vehicles didn’t really present an issue any more,” she adds.

“The range extender option has been an overriding factor that has given users the confidence in the vehicles. In reality, pure electric would never be an option for us, as we need the availability, but we’re now quite accepting of the technology.”

Taking the vehicles on has allowed London Fire Brigade to be recognised as a ‘Go Ultra Low Company’ – with a commitment to operate low emission vehicles on at least 5% of its fleet by 2020.

“We’re quite keen to support Government initiatives like this, and put our names to initiatives that benefit the environment,” says Fletcher.

London Fire Brigade also operates a number of leased vehicles for use by senior officers in the organisation. Unlike the EVs, these are also used for private use and the driver can select a vehicle of their choosing.

“We have, over time, set policy boundaries based on emissions limits, that encourage staff to opt for a lower emission vehicle,” says Fletcher.

“The level of subsidy a driver receives towards the vehicle decreases the higher the emissions are. Drivers can still choose a vehicle that is higher emission, but they could end up covering the entire cost of the vehicle.

The policy was developed in 2011, and we are in the process of reviewing that policy to push the limits down further.”

Ten of the 164 drivers in leased cars have opted for electric or plug-in vehicles to-date, and Fletcher says the introduction of charging points at stations has been key.

Drivers can opt for an annual cash allowance in place of a car – with fewer than 60 drivers taking this option.

The car scheme has been designed to encourage drivers away from cash.

“Being under the mayor, we are focused on the big issues for London, of which air quality is a major issue,” she says.

“We’ve been able to locate and take advantage of public sector funding to make projects more viable. A fleet team is very good at what they do, but we can look at the funding and manage projects with that broader organisational oversight.”

Fletcher’s team will monitor annual reporting that identifies fuel usage, costs and carbon emissions across the fleet, and closely study data to determine the benefits of the electric fleet over a longer term basis.

“We trialled an electric van a few years ago and the range wasn’t there,” says Fletcher. “The majority of our commercial vehicles are Sprinters which carry a heavy payload, and to-date electric doesn’t seem to quite fit.

“We’ve been keeping an eye on what’s happening in the low-emission vehicle market, and it’s looking like hydrogen might be a better fit for those vehicles.”

Hydrogen hybrid vans have already been trialled in London, most notably by office equipment firm Commercial Group, which has been running six vans in the capital since 2014.

London Fire Brigade is a member of the Hydrogen London steering group, and in addition to guiding policy, has been keeping a close eye on the prospect of the technology in its own fleet.

“Those vans are due for replacement quite soon, so we’re investigating our options,” says Fletcher. “

We’re at quite early days, and we’re about to investigate further – but on paper, the range those vehicles have is very suitable. A couple of our delivery routes go near enough to the hydrogen refuelling stations for us to feasibly investigate replacing a couple of these vehicles with hydrogen power

“While we want to move towards a low emission fleet because it fits within our aspirations as an organisation, we recognise that being an emergency service we are a point of influence for other organisations.”

‘We need something that works for us'

London Fire Brigade is the world’s third busiest fire service, attending 140,000 calls a year. Its fleet of 142 frontline vehicles represents a significant proportion of the its CO2 emissions, and is the most visible face of the service.

Nicole Fletcher is already investigating how it can develop a low-carbon fire engine.

“We have aspirations to move towards a low emission frontline vehicle, but this is obviously a much greater research and development ask,” she says. “We’ve been investigating potential funding streams and supplier partners. There does seem to be a little bit of work in this area across the world already, but it’s still very limited.”

Fletcher and the brigade were involved in a European-funded research project looking at retro-fitment of low emission technology to existing vehicles to improve environmental performance.

“This led us down the path of telematics, which we’re about to roll out in our new appliances which arrive later this year,” says Fletcher.

“Our vehicles are a bit different, and it doesn’t fit to take a newly emerging technology and apply it to our them – more development is needed.

“Something as simple as telematics, already well established in other industries, did need quite a lot of work to meet our needs.

“Even though there is movement in the HGV area, we need to push the market to work with us to create something that will work for us, and we’re investigating more innovation funding to develop this.”