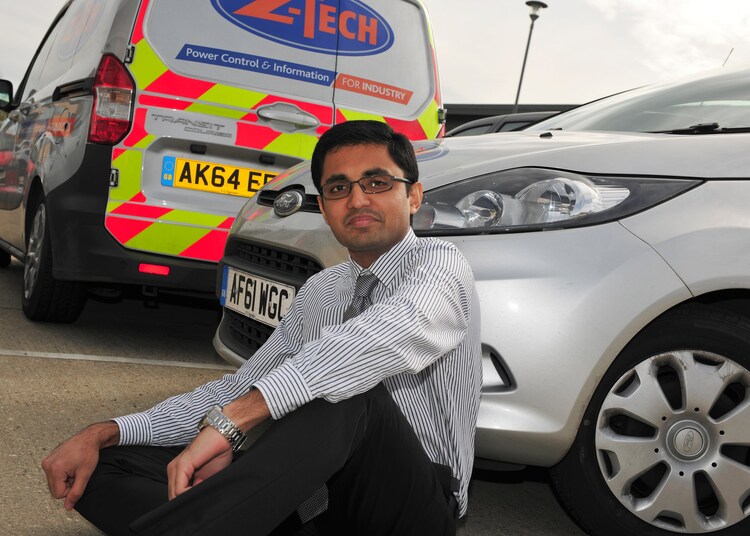 The biggest danger to engineering services provider Z-Tech Control Systems is not the hazardous environments its engineers may have to work in; it’s the road risk its staff face when they get behind the wheel of a company vehicle.

“We sometimes work in explosive atmospheres and hazardous areas for companies, but the actual risk assessment and method statement we have to go through to get on to those sites are so strict that the chances of anything happening are quite slim,” says Sudhanva Rajashekara, Z-Tech fleet manager.

“Whereas the guy getting to site and coming away from site – that’s where the potential risk is.”

Recognising that risk has led the company to adopt a number of safety measures over the past four years, including fitting cameras, speed limiters and telematics to its vehicles, driver training, a driver of the month incentive programme and regular vehicle audits.

“Putting all those things in place doesn’t mitigate the risk altogether but it does reduce it considerably,” Rajashekara says.

The results speak for themselves. Last year alone Z-Tech’s crash rate reduced by around 40%, from 27 to 22 minor incidents.

The fleet now stands at 140 vehicles and is set to increase by a further 50 this year.

All vehicles are bought outright and kept for five years. Switching to contract hire would free up cash but the company prefers to have the vehicles on its asset list because it has available funds and it prefers to keep money within the business rather than contribute to a leasing company’s profits.

The vast majority of the van fleet is Ford, although Z-Tech has downsized from a Transit to a Fiesta van where possible, following a review by Energy Saving Trust in 2009.

“Drivers that just carry technical equipment and don’t have a lot of weight in the back of their vans can quite easily use a Fiesta van and save on fuel,” Rajashekara says. Like-for-like, the Fiestas are using around 22% less fuel than the Transits.

Z-Tech also rents vans from Northgate for new employees to make sure it only purchases enough vans to achieve full fleet utilisation. Rajashekara recently completed a benchmarking exercise to confirm Z-Tech is getting the best rental deal.

Rajashekara is new to fleet. He assumed the role at Z-Tech six months ago when the company decided it needed someone full-time to manage the expanding fleet.

A graduate with a BA honours degree in mechanical engineering from Visvesvaraya Technological University in India, and a master’s in management from Cranfield University, Rajashekara initially joined the company as an intern in June last year.

“Fleet management is my first formal job,” he says. “It’s been a really good learning curve. Our marketing manager Luke has helped me to understand the dynamics of the industry, and our managing director Mick has been helpful in introducing me to a lot of the issues surrounding the fleet.”

Swinhoe knows the fleet well, as he managed it when the company was founded in 2000. As the fleet size grew, Z-Tech’s administration team (which is part of its 24/7 helpdesk) took over the day-to-day responsibilities, overseen by Swinhoe.

Rajashekara reports to Swinhoe and he says that the MD’s involvement means “when we want to make changes it is easy”.

“Any new initiatives we want to introduce get support,” he says. “He is always open to new ideas.”

One of the latest initiatives is increasing the car allowance for hybrid and electric vehicles (EVs) to incentivise company car drivers to make the switch from diesel.

“It works out about cost neutral for the company, using wholelife costs,” Rajashe-kara says.

Swinhoe is one of the drivers currently considering changing to a hybrid car.

He has also proved instrumental in persuading van drivers of the benefits of EVs after the company bought its first electric vans (two Nissan eNV200s) in order to serve its Transport for London (TfL) contract for the maintenance of pumping systems on the London Underground.

He and Stanbridge drove 675 miles from the company’s office near Cambridge to Manchester and Newcastle to show range anxiety could be overcome last winter (see panel below).

Swinhoe has also helped gain employee buy-in for in-vehicle cameras. He, along with the other company directors and business unit managers (the company is split into four business units: site services, systems, rail and water networks), were the first to trial the technology at the end of 2011.

When the decision was made to introduce cameras to the rest of the fleet, Stanbridge was able to point out in his communication to drivers that all vehicles, including managers’ vehicles, would have cameras fitted.

“It helped the drivers to accept the technology without thinking that big brother was taking over,” Stanbridge says.

Z-Tech introduced cameras as its insurance premium had risen steeply due to a number of incidents where it was not able to prove its drivers were not at fault.

“The cameras reduced the premium almost immediately and paid for themselves within the first three or four months,” says Stanbridge. “A lot of people were driving into the back of our vehicles. Normally they are definitely at fault, but the process can be extended by having conversations with the insurance company.

“There is time and effort involved in doing that. If you can show the SD card with the camera footage showing that our driver was stopped in the road, turning right, and that someone went into the back of them it makes it a lot simpler.”

“Whenever the drivers are at the office  we remove the cards, randomly pick a day, and see how their driving was on that day,” he says.

He also reviews the card whenever a serious incident occurs but he admits that the system is not foolproof as, once a card is full, it automatically starts over-writing.

“If a driver has been involved in a mild incident and is still driving and forgets to give us the data from his card we might lose it as it will get over-written,” Rajashekara says.

As a result, he and Swinhoe are currently considering upgrading to a new system.

Each new van that joins the fleet now comes equipped with Quartix telematics and speed limiters, as well as an in-cab camera.

Telematics is used to identify driver location for call-outs, as well as ensuring the company has accurate mileage records to comply with HMRC requirements. Over the past year, it has helped to reduce average mileage from 29,000 to 23,000 miles.

Rajashekara ensures that the telematics data goes to the right managers for the four business units so they are able to view information such as an employee’s arrival time on site and their driving behaviour (incidents of harsh braking/acceleration and speeding).

“We have just started analysing the telematics data more extensively,” he says. “We are matching it to fuel card data and identifying driver training requirements.”

He estimates that telematics has resulted in a 6% improvement in mpg in the past year.

Z-Tech has an extensive driver training programme which started with Energy Saving Trust Smarter Driver training a few years ago. The company’s London drivers are now going through on-the-road training to help Z-Tech move from bronze to silver status with the Fleet Operator Recognition Scheme (FORS).

Z-Tech complements external training with its own training days at a local airfield, with drivers receiving skid coaching so they are able to control their vehicle in icy conditions.

They are also given the chance to drive a bus and an HGV which is designed to help them appreciate blindspots and how difficult it can be to stop a large vehicle.

In addition to behind-the-wheel training, drivers also have to answer a quiz which tests their knowledge on safety-related areas such as tyre pressures.

All company drivers are required to do daily vehicle checks, and every six months each vehicle (including managers’ vehicles) undergoes an audit using Z-Tech’s own app to check vehicle condition. Spot checks are also carried out regularly.

The information is uploaded to Z-Tech’s in-house software, Z-One, and any issues are highlighted for fixing.

Z-One also flags up when vehicles are due for service. Z-Tech has seen its servicing bill reduce by 9% since 2013, which Rajashekara believes is due to a combination of regular audits, fitting technology to the vehicles and driver training.

“It’s really been a holistic reduction in our fleet costs,” he says.

“By the time the vehicles are five years old they will have paid for themselves,” says fleet manager Sudhanva Rajashekara.

Drivers are typically achieving a range of 100 miles doing stop-start driving in central London in warm conditions, and average 1,500-2,000 miles a month.

When marketing manager Luke  Stanbridge and MD Michael Swinhoe completed a 675-mile challenge in one  of the EVs in winter conditions they  averaged 50-60 miles and had to stop  to recharge 11 times over two days.

“We drank so much coffee I think  we were shaking by the end of it,”  Stanbridge jokes.

“When we told drivers what we had done it stopped any complaints about range anxiety and not being able to charge up.”

Z-Tech is now adding a further two EVs to serve another London contract with the potential for more to follow.

Z-Tech has saved an estimated £63,000 since moving to a  supermarket-only fuel card.

The company previously had a card which allowed drivers to fill up at any site and drivers were frequently using the most  expensive locations.

It tried incentivising drivers to  fill up at cheaper locations with  a ‘driver of the month’ scheme which recognised drivers that  had achieved the lowest fuel  price or the most improved mpg in 2011 but that did not make a significant difference.

“You try and persuade drivers to change their habits and, when that doesn’t work, you force,” says marketing manager Luke  Stanbridge. “So we moved to Fuel Genie where drivers can only fill up at Tesco and Morrisons.

“People were initially a bit wary, because we were putting a restriction on what they could do, but they’re now being more thoughtful about where they fill-up. The only team that had a problem was in Scotland, as they can be working in the middle of nowhere. We allow them to use a credit card to fill up but only in emergencies and they’ve been quite sensible about it.”