Driver competitions: time for the carrot 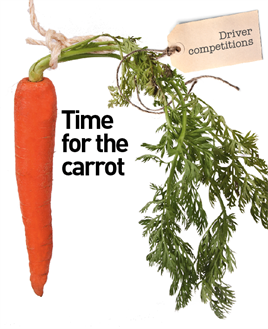 After reducing its collision rate by 14% and saving more than £1 million by taking a ‘stick’ approach with its drivers, G4S Cash Solutions decided it was time to offer the ‘carrot’ by holding a driving competition. Sarah Tooze reports.

Darren Bell, director of fleet services at G4S UK and Ireland, readily admits that the company took a tough stance with its drivers as a part of a new road risk strategy last year.

“We drove them hard on their telematics scores,” he says. “We introduced driver profiling, we tightened up on driver assessments and accident management and investigation.”

This year it was “time to raise morale and get incentives in”.

Here’s how they achieved it.

The best driving competitions are not simply a fun day out for the drivers; there are clear aims and the day forms part of the company’s overall road risk strategy.
G4S Cash Solutions had four aims for its inaugural driving competition: increase road safety awareness, improve driving standards, improve general transport-related knowledge and foster team spirit.
“It’s not about management putting on an event to pacify people; it’s about genuine road safety aims, driver awareness and recognition and reward for the drivers who are performing well day in, day out on telematics,”
Bell says.

2   Sketch out the event

Before presenting the idea to stakeholders, have a rough outline of what the competition will be like. For example, what activities should the drivers do? What venues could work? Could suppliers lend their support? How much is the event likely to cost?

Driving competitions are about giving recognition to employees – an easy sell to the HR director. Having the support of the HR director will then help when presenting the case to the board.

Bell explained to the company’s HR director that he had taken a tough stance with drivers’ telematics scores and now wanted to “give some payback”.

“It sends the message out that people are being rewarded for good driving behaviours,” he says. “I’ve run these types of events before and they have huge HR benefit.”

Like HR, trade unions can be a useful, and often essential, part of building a business case. G4S Cash Solutions has regular meetings with GMB and Bell sought the support of GMB representative Brian Terry.
Terry saw value in the event – and was a member of the winning team.

5   Present the idea to the board

Convincing operational directors that they need to release a number of their drivers from their jobs for the day is arguably the biggest hurdle.
“The operational managers don’t necessarily jump at it at first because all they can see is pound notes and missed labour hours,” Bell says.
He convinced them that they would see the financial benefit during the qualification period for the event as drivers would be competing to have the best telematics scores, leading to reduced fuel bills, potentially lower repair costs and collisions and less vehicle downtime.
Bell also pointed out that the positive experience of drivers who took part in the competition would spur other drivers on in the future.

Purpose-built test tracks are often favoured for driving competitions, but vehicle manufacturers may also be able to assist with a venue.

G4S Cash Solutions asked Mercedes-Benz, which supplies 90% of its van fleet, whether it had any suitable venues. It offered its driver training facility at Barnsley where other major fleet customers had already held similar competitions.

7   Get support from suppliers

Holding a driving competition can be an expensive exercise. Hiring a driving simulator for the day, for example, could cost more than £1,000.

Then there is the expense of moving fleet vehicles to the venue, having staff man the stands/driver activities, medical cover, staff travel and subsistence, and the prizes.

G4S Cash Solutions held its one-day event for just £4,000-£5,000 thanks to getting support from its suppliers.
Its insurers funded the driving simulator, its maintenance provider BT Fleet took care of the vehicle fault clinic and, together with Peugeot, Michelin, Fiat and Mainstream Training, donated prizes.

“If you’ve got a good supplier base and you have the right marketing approach it can be very cost effective,” Bell says.

Each driver activity/stand needs to be carefully planned with consideration for health and safety.

The blindfolded manoeuvring stand, for example, could be potentially dangerous. G4S Cash Solutions reduced the risk by having designated boundaries and areas where people not participating could stand, as well as an independent safety advisor in the cab with the blindfolded driver.

“You’ve got to look at every stand in turn and assess any risks and make sure they’re safe,” Bell says.
Detailed instructions were provided for staff manning each stand.

Marketing the event to the drivers through poster campaigns, emails and information on the intranet can help generate interest.

Bell says this should ideally be done three months before the competition.

Telematics data is a popular way to choose which drivers to put through to the driving competition. Selection can also be based on the driver’s risk profile and accident record.

G4S Cash Solutions’s criteria were: no at-fault accidents within the past three years and consistently high eco scores for telematics.

It opted for five teams (two from the south, two from the north and one from the secure engineering division) with six drivers in each team.

“Originally we were going to have one entry from each region but the managers were so bought into the idea they asked for more,” Bell says.

Members of the G4S Cash Solutions fleet team arrived two days before the event to help prepare the venue with Mercedes-Benz.

12  Reflect on the event

Post-event it is important to get feedback from all those who take part to see what went well and what could be improved in the future.

Bell hopes to expand the event next year with the entire G4S UK and Ireland region taking part, not just the Cash Solutions business unit.

He aims to hold regional qualifiers, leading up to the national final.

The business’s new road risk manager Sam Weller is already working on the event with full backing from the board.