Fleet and drivers: 11 ways to communicate with drivers 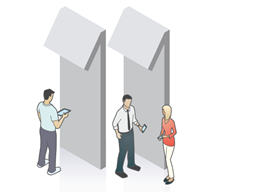 From vehicle handovers to social media, we look at the different methods fleets use to get their message across to drivers.

Driver handbooks are the traditional way to communicate fleet policy to drivers and should contain information such as restrictions on vehicle use, fuel, use of company vehicles outside the UK, fixed penalties, insurance cover and business mileage.

They can also include guidance on licence checks, driver behaviour, use of mobile phones and in-car devices.

However, this means they can often be large, unwieldy documents.

“When I was a lot younger, fleet policies used to be about five inches thick, weigh about 10kg and you were told ‘read that, you’ll know everything’, but that isn’t good enough in this day and age,” says Peter Eldridge, director at ICFM.

“If you go on Ebay, or a similar site, there are all those terms and conditions, and most people click the ‘accept’ button without reading them. So why would we think our drivers are reading a lengthy document?

“No one is going to read it and you can guarantee that in the middle of it there will be something very important.”

Gateshead Council deals with this potential issue by giving drivers a small handbook that addresses areas such as vehicle load, driving styles and daily walkaround checks.

“Its brevity ensures drivers will read it,” says Graham Telfer, fleet manager at the local authority.

Line managers and other senior members of staff should lead by example when it comes to safety initiatives, says Will Murray, research director at eDrive Fleet.

“They need to champion them, manage them, do them themselves and support them,” he adds.

“There are loads of companies who have introduced really good risk management programmes and, as well as having a positive impact on collisions, they have improved the reputations of those businesses. Some initiatives have also enabled individual managers to get promoted on the back of their success, so there are lots of benefits.”

At Gateshead Council, whenever there is a change to procedures or any aspect of operational road risk, toolbox talks are created and communicated to drivers by line managers. Drivers must sign to say they understand the information provided.

The packs include equipment such as an ice-scraper, de-icer, sunglasses and a tyre pressure gauge.

“Having this equipment should make them safer, but the big drive behind it was to promote discussion to get them thinking about road safety over winter,” says Dermot Coughlin, operations director at Kelly Group.

“We are employing engineers who have to drive for their job. The packs are a tangible gift to them and are not a lot of money when you consider the safety benefits of both having the equipment and making them think about how they can be safer on the roads.”

Intranet sites can be used to convey polices and other fleet-related matters to employees.

For example, Bauer Media company car drivers who log on to the the company’s intranet can access information on subjects such as driving at work policy, mileage rates, maintenance guide, insurance and safety advice.

“People like to be told what they should be buying, either through third-party reviews or by us – it’s informed decision-making,” says Will Smith, rewards and benefits manager at Britvic. “They like to know what best fits their needs.”

Using the intranet to promote offers has allowed Smith to secure better terms with car manufacturers, despite adding more brands to the fleet.

“We make manufacturers understand that internal promotion impacts take-up: the ones we advertise to employees are the ones they order,” he says. “So we go back to them for better commercial terms and ensure that those are the ones we promote internally.”

Outside organisations are often used by fleet operators when they want to promote a message or new initiative to employees.

Peter Shields, assistant road safety officer at Cheshire Fire and Rescue Service, says an increasing number of fleets are asking the organisation to deliver presentations for the benefit of their staff.

“Companies have a duty of care to their employees to provide them with health and safety information and, while fleet managers can provide this, information coming from the fire service or police will perhaps carry more weight,” he says.

“There’s also an element of trust with us because if we go and deliver something it will be right: we’re not going to go and say something when in actual fact it’s something different.”

Workshops proved a useful way for South & City College Birmingham to educate staff when it introduced its salary sacrifice scheme with TCH Leasing in October 2012.

“We’d been running more of a PCP-type car lease scheme, but the number of people taking that up dwindled,” says Mark Jenkins, the college’s executive director of HR.

“Around that time we merged with another college, so we, as a college, had made a decision to take all the staff away on three training days so they all understood what the culture of the new college was going to be.

“That was an ideal opportunity to launch the scheme, so TCH provided us with information which we were able to pass on to our staff, as well as details on how to use the website it had set up to get quotes and further information.”

The Rugby Football Union took delivery of 90 Mini Countryman models last year for use by its community coaches.

These were handed over at two events: one was at the Cunard Terminal at Southampton docks, with the other at Thorne, the BMW and Mini distribution centre in Doncaster.

“At these handover days we demonstrated the cars to the coaches,” says Alisha Bird, fleet co-ordinator at the RFU.

“We had support from the retailer that handles all our new orders. We did some history about the vehicles and a BMW and a Mini specialist came in and told them more about the functions of their new cars.”

The handover days also proved an ideal opportunity to get the fleet department’s message across to the drivers. “We demonstrated what an asset the car was for them to be able to do their job and what it represented as a financial asset to the RFU,” says Bird.

“We told them about our accident stats, showed them some of the worst photographs we could find, how much the repairs cost, what that represents to us as an organisation and what, if we were able to save that money by reducing the cost of the incidents, they could achieve in their own roles with that money.

“It wasn’t just a case of taking the keys back from the drivers and giving them another set of keys.”

The nature of Miller’s Vanguard’s business means fleet manager Nick Webb doesn’t see all of the food industry equipment supply and maintenance company’s drivers very often. “Email is the easiest way of reaching most people in one go,” he says. “If you use the telephone you can reach one person if you’re lucky, which means you’ve got to replicate it 250 times to have the same reach.

“The other upside with email communication is you not only get to the guys who drive company vehicles, you can contact all employees, so we are not just talking about those with company vehicles, we can communicate a general ethos of driving a vehicle whether it be in private life or for business.”

Webb tailors his messages depending on the staff he sends emails to, while he also varies the topics to ensure drivers do not lose interest in the bulletins and simply delete them without reading.

REL Marketing has embraced Yammer, a social media platform specifically designed for business use, to communicate with drivers.

Its fleet team uses it to send out road safety messages as well as news such as the abolition of the paper counterpart to the photocard driving licence, which appear on the home screen when drivers first log into the platform.

“It’s been really good for raising the profile of the fleet department,” says David Millar, procurement manager at REL Marketing.

“But what I don’t want to do is become a nuisance to people. We want to give messages to drivers, but we don’t want to pester them.”

One example of how using Yammer has proved effective is when the company used it to address concerns over diesel particulate filters (DPFs).

“We sent out a message about the DPF warning light because we had a number of issues with drivers plodding round town and chocking up the DPF filters – it’s expensive to get them regenerated or replaced,” says Millar.

“We asked ‘ever wondered what this symbol means?’ with a picture of the DPF warning light, and then we explained what it means and what they need to do to get rid of it.

“We had a number of responses like ‘we never knew what that meant, we appreciate that’. Drivers enjoy reading that sort of stuff because it affects their day-to-day lives.”

Events such as Brake’s annual Road Safety Week, which takes place each November, can be used by fleets to engage drivers.

“People do internal things but a lot of people are going out into schools, running community events, working in partnerships with local emergency services to do some really great events that benefit more than just their organisation.”

Other major events, such as this year’s football European Championship, can also be used as a “hook” says Will Murray.

“Big sporting events can have a massive impact on road safety,” he says. “In America, the Superbowl has a big effect.  For example, the collision rate among supporters of the losing team is always higher.”

Gateshead Council has found that videos can be a high impact method of communicating safety issues to drivers.

“It doesn’t matter what walk of life you’re from, 20 minutes after sitting in a classroom listening you just switch off,” says Graham Telfer, fleet manager at Gateshead Council.

“We use videos produced by Brake in which someone has unfortunately experienced a road accident, whether a family member or themselves.

“That changes the mindset of even the most hardened driver. Showing someone who has real-life experience of losing someone makes it inescapable that it is a situation someone could find themselves in through their actions.

“The videos from Brake, such as Too Young to Die, work extremely well.”

Thames Water has produced a video – available on the company’s intranet – to show drivers how to complete daily vehicle checks.

Posters and leaflets can be a simple but effective way to get a fleet’s message across.

Gateshead Council displays them in all its depots and buildings. They cover topics such as speed, tiredness and drink-driving, as well as guidance on daily vehicle checks. Kuehne + Nagel UK uses posters to get employees’ families involved in road safety.

“We have a children’s drawing competition that we run on a safety theme every year,” says Astrid van der Burgt, national road risk manager. The children of all our drivers and colleagues are invited to take part and the best 12 get converted into road safety posters for the next year.

Most popular articles in Driver Management