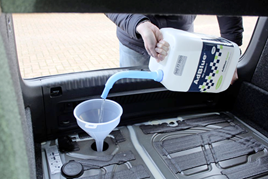 AdBlue is a brand name for an additive that is 32.5% urea and many manufacturers are using it in their diesel powertrains to meet Euro 6 emissions regulations (all diesel cars and vans registered after September 1, 2015 have to emit a maximum of 80mg/km of NOx – less than half the previous cap – with many vehicles sold before this date already complying with this rule).

The clear liquid is injected into the selective catalyst reduction (SCR) system in the exhaust chain, where it triggers a chemical reaction which converts NOx into nitrogen and water vapour. It has already been used for a number of years in commercial vehicles, but is something fleet managers and car drivers may not have experienced until a warning light comes on signalling a top-up is needed.

How often do you need to top up?

If the warning light is ignored and the AdBlue runs out, the vehicle stops and will not restart until it is replenished. When this happens will depend on the car and how it has been driven.

Peugeot and Citroën say their vehicles will require a top-up every 12,500 miles (fitting with the service interval of some, but not all, models), while some Audi, Vauxhall and Volkswagen vehicles could require refilling every 3,000 miles.

Consumption will also vary from car to car.

Do I have to pay myself?

It is now becoming accepted that the additive is not included as a service, maintenance and repair (SMR) expense covered by a leasing company.

Some fleets will cover the cost, either telling a driver to pay and claim back through expenses, or pay through a fuel card. Others will expect drivers to cover the cost.

How do I buy AdBlue?

The first, and potentially most costly method, is to use the dealer network. Costs vary considerably, with some brands having a fixed price policy, either for a full top-up or per litre. Peugeot and Citroën offer a top-up of up to 10 litres for £9.99, while BMW charges £24.99. Volkswagen, Audi and Seat are among those charging on a per-litre basis, with a fixed price of £1.50 per litre. Outside these fixed price policies, for other brands the results are likely to be similar.

Jaguar Land Rover vehicles on a service plan receive a free top-up but, for those outside a service plan, prices are "at retailers' discretion so may vary”.

The second option is for a driver to obtain a refill kit from a dealer's parts department. The majority of brands offer a 1.89-litre refill container, which has a special valve to make filling up easier. Costing between £6 and £8, it's not the cheapest way to fill up, and several containers may be required for a full top-up, but it is straightforward.

The practical process of a driver refilling AdBlue varies significantly depending on the type of container, and the location of the filler on the vehicle. Models that have been designed with AdBlue in mind, such as the new Audi A4 and Volkswagen Passat, will often locate this under the fuel filler flap on the side of the car. Others – where the tank has been added to the vehicle midway through its life, including many Citroëns, Peugeots, and the Volkswagen Tiguan will locate the filler cap under the boot floor.

The special refill containers offered by dealers click into place, meaning there is no spillage. The 10-litre capacity containers available from motor factors, some dealers and many petrol stations, are perhaps one of the cheapest ways for a car driver to top-up, but are not without their issues.

In cars where the filler cap is located in the boot floor, a funnel may be required to reduce the risk of spillage. The containers are supplied with a tube, but these may not be long enough for easy refilling.

The 10-litre containers cost between £10 and £18, and should be large enough to reduce the frequency of top-ups.

Can I use an Adblue pump at the petrol station?

Paul Norman, manager at chemical company Air1, explains that the pumps cannot be used for passenger cars. “Cars will have onboard AdBlue tanks a fraction of the size of a truck’s and the pump flow rate would result in overfilling in a matter of seconds,” he says.

Most popular articles in Drivers Guides