In his Twitter bio, the fleet assistant describes himself as an ‘electric vehicle nut’, and with good reason.

“I think if you want to do like I do, you have to immerse yourself in it.”

Smith has owned a Nissan Leaf for the past three years and his first-hand experience has made him an enthusiastic advocate of the technology.

“I could have got a standard family car and no one would have thought anything about it, but an EV makes sense for me, for where I live, my journey to work, being able to charge it here,” he says.

“It was a no-brainer to have one, and having one helps me educate people about them.” 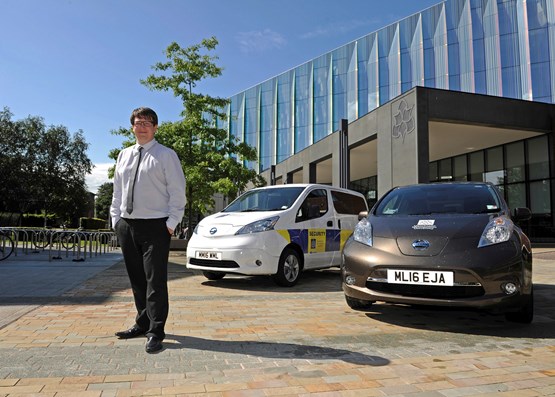 This has been important in helping MMU further its green credentials, something it prizes highly. It is currently ranked the third greenest university in the country in the People and Planet University League.

Its electric vehicle journey began in 2014 when it won funding from Transport for Greater Manchester (TfGM) towards installing 24 charging points.

“This was the catalyst for everything we’ve done,” says Smith. “It was the whole chicken and egg scenario.

“We didn’t want to buy any electric cars until we had some infrastructure, and getting it helped to kick-start what we wanted to do here.”

The university now has 36 charging points – including the only publically-accessible rapid charger in central Manchester.

MMU has also replaced the diesel Mercedes-Benz S-Class executive pool car, used by the university vice-chancellor and executive to attend meetings, with a BMW X5 plug-in hybrid, while the security team has also replaced its diesel vehicles with an e-NV200 and a Leaf.

A number of under-utilised diesel vans have also been defleeted.

Smith says the introduction of the pool car fleet has been one of the biggest successes.

“We’d never had a pool car system before in any capacity,” he says.

“We had a lot of people using their own vehicles for work-related journeys, but they were also renting vehicles from our nominated supplier and instead of taking them for a couple of hours, they may have been taking them for a week if they had placement visits, which was not cost effective at all.

“All our placement visits and meetings tend to take place within the Greater Manchester area, and are very rarely outside a 30-mile radius, which makes them suitable for EVs.”

One of the early challenges faced by Smith was the administration of the scheme: who would keep the keys, how could employees book the cars, how could he ensure they were put on charge at the end of their hire?

The answers came from a supplier. “We were actually approached by Enterprise to see if we would like to be a pilot scheme for, effectively, what is its car club,” says Smith.

“We had already made the capital purchase, but we pay Enterprise a monthly fee, it installs its telematics, gives us a portal on its website and we can book our vehicles through its car club booking system.

“People can get into the cars with their membership card and start it with their PIN.

“It gives drivers the flexibility of being able to take a car at 7am or return it at 11pm and not be concerned about where to leave the keys or if they’re secure because the Enterprise system looks after that.”

Drivers are encouraged to plug their vehicles in at the end of their hire, but Enterprise monitors the cars so if the charge hasn’t been increasing over a certain amount of time, a member of staff is deployed to plug them in.

Smith says around 160 employees have so far signed up to the pool car scheme, with 65% to 70% of those having used the vehicles. The average mileage of each hire is between 25 and 30.

“I think we can put a lot of (the scheme’s success) down to us being quite personal in our approach. So, instead of leaving people to their own devices, we have done quite a lot of personal training,” he adds.

“You can arrange a half-hour session with us where we talk you through the booking process right the way through to driving a Leaf.

"We’ve found you can dispel rumours about electric cars if you actually sit people in the EV and allow them to drive it.

This is where Smith’s experience as an EV owner helps. “During the sessions you can see people visibly relax,” he says.

“I can tell them that I’ve never run out of charge, that I’ve been to London in it, to Birkenhead in it and Yorkshire in it, and that does seem to have an effect on people.

“I can honestly say, of all the people who have used the pool cars in all this time, nobody has said to me ‘I’m not driving that again, it doesn’t work for me’.

“All the feedback has been positive. We’ve even had people taking them beyond their range and used the public networks to charge them. They feel confident with them.”

As well as the financial savings, Smith estimates the pool car scheme has cut CO2 emissions by around 6.65 tonnes, but these are not the only benefits.

Given the vehicles are liveried and branded, they portray a positive image of the university, while also helping reduce the demand for parking spaces on the campus – a commodity under threat as the university’s estate strategy is looking at redeveloping many of the spaces in the future.

“If people are bringing their cars to work purposely to go on and do other journeys, then they are still using a car parking space,” says Smith.

“With the pool car scheme, they can book a vehicle up to six weeks in advance, they know the car is here and available for them, and in the long-term they know they won’t need to bring their car into the city or on to the campus any longer.”

Smith adds: “We still feel we haven’t scratched the surface on the pool cars in all honesty.

"Last year 550 members of staff made a claim for mileage for using their own car, and we’re up to 160 people who have signed up to the pool car scheme, so we still have a little bit of work to be done trying to bring those numbers up.

"We also still feel we can utilise the cars better than we do at the moment.”

The university also has a number of other initiatives aimed at encouraging staff to travel to work in modes of transport other than a car.

These include a cycle-to-work scheme under which more than 150 bicycles have been bought, loans and travel discounts for public transport, while a stringent application process for parking permits is also reducing the number of people able to park on campus.

A survey earlier this year found the proportion of staff driving to work as single occupants has decreased from 31% to 26% over the past three years. The university hopes to reduce this to 25% by 2020-2021.

So far – excluding the security team’s vehicles – three have been replaced by e-NV200s.

These are a van on the university’s Crewe campus, a vehicle used by the reprographics team which, for example, delivers printing and paper around the Manchester campus, and one used to deliver internal mail.

“The internal mail delivery van has been our biggest win,” says Smith. 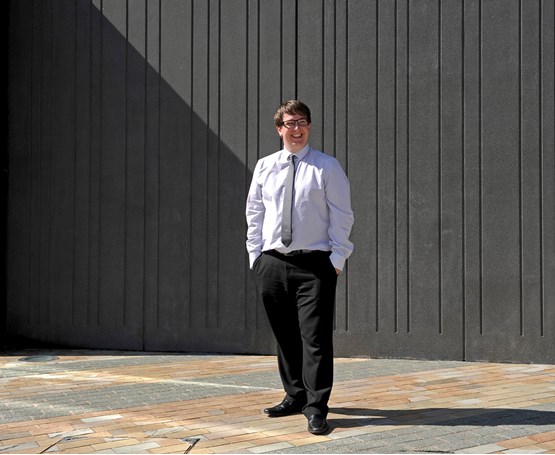 “It’s replaced a diesel van which was doing between 75 and 80 miles each day – a no-brainer for an electric vehicle. However, we did discover quite early on that it wouldn’t really make the journey on a single charge – it was too close for comfort for the guys.”

This issue was initially resolved by charging at Knutsford services, but the university did not want to rely on the public charging network, so “with a little help from Nissan” it installed a rapid charger on the Crewe campus, says Smith.

“We installed it right next to the post room, so the driver can plug it into the charger and that 15-minute boost it provided while they were doing work in Crewe was more than enough to get back to Manchester.

“It was not really that cost-effective to do it, but that was our commitment to electric vehicles and we wanted to make it work.”

He adds: “The internal mail delivery van is doing 1,200 miles a month and it’s been invaluable.”

Smith’s ultimate aim is to replace all diesel vehicles with electric models, but this puts him at the mercy of the market, he says.

For example, MMU operates two diesel minibuses, but no electric alternatives are available, while range restrictions are preventing it from replacing five diesel maintenance vans with electric counterparts.

“They are on a lease at the moment and the major barrier with those is that they are used for call outs, so the guys use them during the day and take them home in the evening,” says Smith.

“Some of them live beyond the range of the electric vans we’ve been looking at recently, so there’s a bit of a discussion going on internally whether the call-out system needs to be changed.

“Ideally we want to be able to have a 100% electric fleet, but there are still some obstacles we have to overcome.”

MMU has qualified for Go Ultra Low Company status, which acknowledges and rewards companies that have included significant numbers of electric vehicles on their fleets, with a commitment to add more before 2020.

Earlier this year it was also awarded the Gold Travel Choices standard by Transport for Greater Manchester (TfGM) for its sustained commitment towards promoting sustainable travel.

“A lot of our business cases have been more about outward facing and setting the precedent for being a leader in electric vehicles,” says Jason Smith.

“We’ve done a lot of work with TfGM, and have given presentations to other businesses about what we’ve been doing in terms of electric vehicles, how we’ve made these things work and how they can tap into various grants to help them achieve their aims.”

Nissan has revealed a new Leaf with an increased range of 235 miles and the introduction of its latest autonomous driving technology.