Fleets and the environment: What does the future hold for the internal combustion engine? 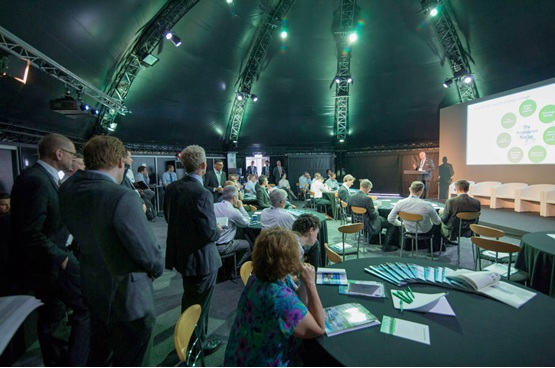 Internal combustion engines (ICEs) have been the dominant form of propulsion for cars since the start of the 20th century. However, their status is under threat as demands for greater efficiency and lower emissions has accelerated the development and availability of electric vehicles.

The Go Ultra Low campaign has forecast that electrified powertrains could overtake ICEs as early as 2027, with more than 1.3 million electric cars registered each year.

Will this shift spell the end of the ICE? Its future was debated by experts from the Advanced Propulsion Centre UK at last month’s Low Carbon Vehicle 2016 event, held at Millbrook Proving Ground in Bedford.

What does the future hold for internal combustion engines?

Chris Brace: The ICE is in the incumbent technology. It’s what we’ve all grown up with and it dominates the market so it’s easy to point the finger and highlight all its shortcomings. But the main reasons why it dominates are that the technology is intrinsically affordable while the engine is made from easily available, low-cost materials that are readily recyclable. 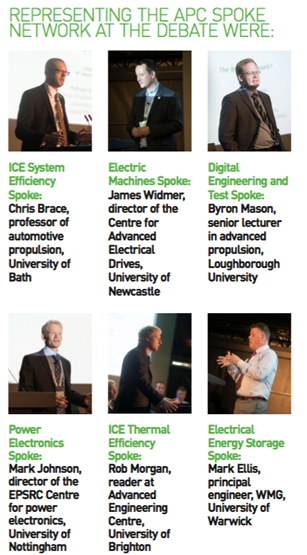 The ICE is accessible to a very large part of the market and it has changed the way we live in the west and it is changing the way that people live in the developing world. Another part of it is the versatility of the technology. I use the term ‘general purpose passenger car’ quite often to describe vehicles such as the Ford Focus. You can do everything in that: you can commute to work, you can go on holiday, you can go shopping. You can drive for five minutes or you can drive for 1,000 miles very easily.

That means that you only need to invest once in the car and it will do pretty much everything you need it to do, and the importance of that is not to be underestimated. Probably more important than those reasons, though, is the fuel. Hydrocarbon fuel is one of nature’s best ways of storing energy in a nice, energy-dense, compact form. It’s easy to store and transport: it’s still the most effective energy carrier we have. I’m not going to say which hydrocarbon, but hydrocarbon is going to be the most efficient way of moving energy around with us in a mobile application. This is true now and will remain true, and that’s the real difficulty we need to overcome if we seek to replace the ICE.

James Widmer: If you look at electric motors now and compare them to some of the best ICEs on the market then there really isn’t any comparison. For example, if you take the 4.0-litre engine in the BMW M3, the manufacturer says it produces something like 1.5kW per kilogram of engine mass.

Back in Newcastle, I have an electric motor that will do at least three times that. It will also produce twice the torque density and it delivers torque in a way that the ICE can only dream about – full torque from zero speed. In addition to that, it is just so much more efficient than an ICE, so much cleaner and will produce 90% peak efficiency.

That petrol engine will be something like 30%, so they are incomparable. There’s a lot of work going on to get more out of motors, to increase their power densities, efficiencies and improve the way they integrate into vehicles and, indeed, to make them cheaper and better all-round.

Rob Morgan: ICEs are great, but they are inefficient. We waste two-thirds of the energy we burn through the exhaust and as heat into the radiator, so the question is: could we do more? I think the answer is yes, and that’s why the research we are doing is relevant: how can we turn the ICE into a more efficient device? Why haven’t we done that to date?

Well, it’s really economics. Fuel is cheap, it just doesn’t invite investment into the engines and powertrain to make the system more efficient. That’s going to change as fossil fuels become a more valuable commodity and we perhaps move on to using manufactured fuels, either biofuels or synthetic fuels, so improving how we use that fuel and how we convert that into motor power will become more important.

If we can make a sustainable fuel in a cost-effective, sustainable way, then the ICE will be with us for some time yet. It is a great technology and it’s got a long way to go.

Chris Brace: Zero carbon hydrocarbon fuels are really important and zero carbon liquid fuels are not so far away: there are laboratories making methanol directly from sunlight, while Audi has a biomethane plant in Germany.

What technology will you be driving in 2030?

Mark Ellis: The conciliatory view would be a plug-in hybrid. In terms of carbon reduction, vehicles will have some level of electrification to overcome the difficulties with emissions from ICEs. The range provided by battery electric vehicles is one of the key challenges. It works for most journeys that people make in their private cars, but we use our cars in many different ways and therefore the plug-in hybrid offers the best of both of those.

Byron Mason: It is not actually technology that drives the technology, it is the legislators that drive it, so when cities like London say “we are not having polluting vehicles and noxious gases put into the cities” then we have got to seriously consider that we have to use pure electric vehicles.

In the past, certainly within Europe, we have been able to choose between petrol and diesel. Now we also have various options such as hydrogen and electrification.

I don’t think there will be one dominant fuel type by 2030 so we will have multiple options. In terms of mainstream technology, it is very much likely to be plug-in electric hybrids vehicles.

James Widmer: I expect that by 2030 every vehicle will have some kind of electrical machinery which will make them more efficient and better to drive. However, in terms of energy storage, I think there will be a variety of different technologies.