Was this article useful?
4 people found this useful
2 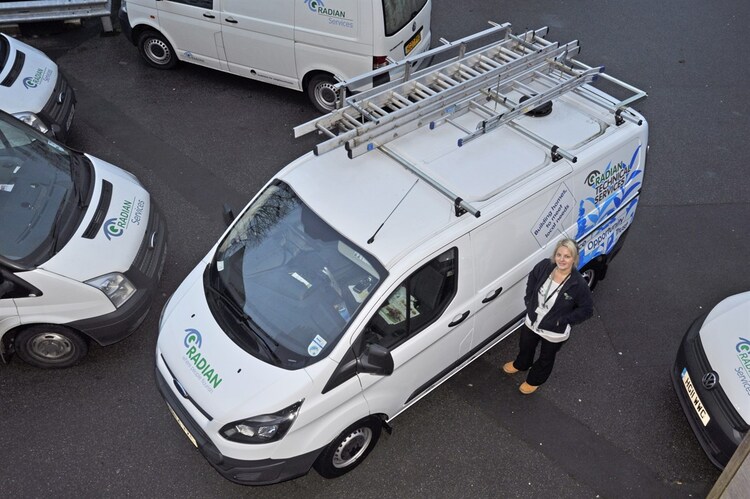 Like many fleet professionals, Sam McIndoe didn’t set out to be a fleet manager when she joined the Radian Group seven years ago.

Her main job was in payroll, with fleet administration “on the side”.

But two-and-a-half years ago the company recognised that there  was a need for stronger fleet management. With a growing fleet of more than 100 vans, used by a variety of tradesmen, fleet management had to become a full-time role.

McIndoe says that she “embraced” the full-time role. She joined ACFO and learned a lot about fleet by networking with other fleet managers in similar organisations. The fleet now numbers 170 vans and 30 cars.

“What I enjoy about fleet management is that every day is different,” she says. “It can be challenging at times, especially working with 170 trade operatives and being female in a predominantly male industry.  But I like the challenge this presents.”

She has found that communication and good relationships – both with suppliers and drivers – are key to successful fleet management.

So how do you get 170 trade operatives on side?

“It’s being present,” she says. “Making myself easily available, despite Radian operating across three sites. I try to visit each site regularly. It’s just chatting to the guys, making them aware that anything they need help with – they can just call me. It’s being a face, not just someone sat in the office giving out instructions.”

Incentives play a part too. Radian has introduced a ‘thank you’ scheme with McIndoe able to award shopping vouchers to the drivers that she feels have best looked after their vans in line with the driver handbook.

Drivers have to do a daily check of their vehicles before they can accept their first job, and Radian is in the process of automating this so that an electronic record of all vehicle checks can be kept.

McIndoe also carries out an annual check on all vehicles in the fleet, assessing condition and any damage, and recording mileages. In  addition, the driver’s van is checked by their line manager when they have their annual appraisal.

“I like to see a clean and tidy fleet,” she says. “It makes a good  impression to the customers and the public.”

Keeping the fleet in good condition extends to McIndoe taking a “hands on approach” to fleet maintenance: changing bulbs, door mirrors and other small parts.

“If you go to a garage you can pay £14 to have one bulb fitted so at each depot I stock every bulb they might need, door mirror parts and oil,” she says.

Many of the trades may be required 24/7 and vehicle downtime has to be kept to a minimum.

McIndoe tries to keep a spare van at each depot, but in the event of a breakdown she also turns to Radian’s main vehicle manufacturer, Ford, to see if it is able to loan a vehicle or to her network of independent garages.

Does she get better deals by having these relationships?

“I think so,” she says. “Because I build relationship with local garages, they are keen to help us out and go that little bit further to keep our fleet fully operational. They treat us well and we have come to expect a good service when we use the garages in our local communities.”

As a housing association, Radian also has access to the Procurement for Housing framework agreements and can achieve a 24% discount when buying its vans.

The fleet is currently Ford and Volkswagen and consists of panel vans, tippers and flat beds.

Vans are usually replaced every five to seven years, depending on mileage, condition and the needs of the business.

Vehicle mileage varies, depending on the area the driver is working in, but vans typically have clocked between 100,000 and 130,000 miles by the time they are considered for disposal.

Rather than selling them through the major auction houses, or local dealers, Radian sells six to eight vehicles at a time to its registered suppliers by tender process as it is more cost-effective and more convenient.

The fleet is constantly increasing and evolving. This year sees McIndoe taking over the management of an additional 30 vehicles for Radian Support, the care and support branch of Radian.

The vehicles are currently on contract hire agreements, but McIndoe is looking to switch to outright purchase so that everything is in-house.

Driver licence checks are done through RAC Risk Management but everything else is handled by McIndoe.

“The advantage of doing things in-house is that I know where everything is and what is going on with everything,” she says.

“It’s about keeping it all in one place, being the sole point of contact.

“And we are saving on fleet management fees by doing it ourselves.”

She admits that this approach works because the company is  not operating thousands of vehicles. She also concedes that the  downside of an in-house approach can be increased administration.

She eases the admin burden by using Vinity Soft’s fleet management software to keep accurate records and get reminders when services and MOTs are due. To manage fleet costs McIndoe has begun producing monthly reports to management to highlight areas such as fuel spend and speeding. The fuel report uses fuel card data to show which areas and vehicle registrations have the highest fuel spend, as well as the number of litres compared to the previous month and the previous year.

McIndoe then looks into the reasons why some drivers are spending more than others and reminds them about getting value for money when purchasing fuel (not buying premium fuel, for example) and looking after the financial interests of the organisation.

Radian has been using Allstar fuel cards for several years, and switched to the Allstar Premier Programme (which means that drivers have an Allstar card and a Diesel Discount card) last year to reduce transaction fees.

McIndoe admits that having two cards does mean that drivers  sometimes use the wrong card but she has added this to her monthly reporting to target those drivers that do.

Monthly reports on speeding from tracking data have “dramatically helped” to reduce speeding, according to McIndoe.

“We monitor speeding for many reasons – to protect the image of the organisation, the safety of the public and to ensure that our drivers stay safe and within the law,” she says.

The trackers were originally fitted to record vehicle location, the safety of staff and to ensure emergency repair requests were responded to quickly. They are now used in conjunction with PDA units which give each driver jobs in their area and which ensure jobs are done in the most efficient way.

McIndoe would like to trial a driver behaviour-based telematics system which would allow her to see which drivers are braking, cornering or accelerating harshly, not just vehicle speed and location, which would also help with managing high risk drivers. All drivers undergo classroom-based training and those that are high risk with a high number of points on their licence, or who have had a number of accidents, undergo an in-car assessment with the Blue Lamp Trust, which promotes community safety in Hampshire. “There are always challenges when running a fleet of 200 vehicles,” says McIndoe. “But I aim to do it smarter by looking at what we do and seeing how we can make it better.”