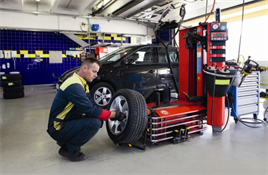 Fuel efficiency, safety and noise are the three areas where the battle for tyre supremacy is fought. New products jostle to highlight ever improving fuel consumption and shorter stopping distances – both of interest to fleets.

However, clear lines have recently been drawn over the issue of minimum tread depth with major disagreements between three of the dominant brands in the UK market, Continental, Michelin and Goodyear Dunlop.

Continental Tyre, an original equipment supplier to more than 30% of all new European cars, is campaigning for a new minimum limit of 3mm – currently 1.6mm in the UK – which it claims would result in a significant cut in traffic accidents.

But its bid to change the law is being challenged by rivals Michelin and Goodyear Dunlop.
“We are not in favour for two reasons. The first relates to environmental and cost reasons – if everyone had to change their tyres at 3mm, we would have to manufacture more tyres and dispose of more tyres,’ says Michelin spokesman Peter Snelling.

“Our second reason is that there is nothing to say that moving to 3mm from 1.6mm has any impact on safety. There is absolutely no data to show more accidents occur as a result of people having tyres at the current minimum tread depth.

“What we are keen to make sure happens is that people adhere to the law. We know that many go beyond the 1.6mm limit and this is dangerous – there are statistics to prove that once you get down to 1mm tread depth and less, braking distances are much greater, particularly in the wet.”

A Goodyear Dunlop survey found that four of every 10 tyres removed from cars at its centres were illegal.

“It is a matter of concern that they have been driven into the depots in that state, so if we are to get an improvement in road safety, we really need to push for rigorous enforcement of the law,” says spokesman James Bailey.

“If the minimum depth were to be changed to 3mm, we would all sell more tyres, but we believe this would add to fleet costs by forcing operators to throw away tyres that still have a good level of tread.”

According to Bailey, recent advances in technology allow the latest Goodyear tyres to retain the same wet weather performance throughout their life.

“Performance in the wet no longer declines in a linear way with the tread depth. We’re now able to run on a harder compound tread when the tyre is new and enter a softer compound after 15,000 miles to offer the same levels of grip and adhesion,” he says.

“In addition, the smart wear technology in our latest OptiGrip covers allows new tread patterns to appear after 15,000 miles to allow the tyres to evacuate the same level of water as they do when new.”

Goodyear tyre technology director Jean-Pierre Jeusette adds: “It is easy to develop a tyre that provides a lot of mileage, but our focus is on developing covers that have excellent performance in safety-related areas like braking and handling, particularly.

“Smartwear allows us to provide this over the lifetime of the cover, without having to compromise on mileage or other important parameters. This is a major step forward and is our main reason for saying there is no need for an increase in minimum tread depth.”

However Continental maintains that its studies and those of independent exp-erts have shown that braking distances, particularly in the wet are greatly increased after the tread depth falls below 3mm.

Its spokesman says: “The 1.6mm legal limit dates back to 1992 when cars had thinner tyres and less horsepower. Over the years, the trend on new cars has been to have larger, wider tyres with lower profiles to improve performance and styling.

“This means that the contact patch on the road is larger, which is great for braking in dry weather, but a problem when conditions are wet. The greater contact patch means you are at greater risk of aquaplaning and a tread depth of 1.6mm is not sufficient to channel the water away from under the tyre, mean-ing it loses contact with the road and the driver can lose control.

“Although many cars come with ABS and ESC to help the driver keep control, these have little benefit if the tyres are not in contact with the road. Research shows the risk of aquaplaning becomes more pronounced when the tread depth goes below 3mm.”

Tyres are set to join white goods items like fridges and washing machines in carrying Government labels to rate their performance.

New regulations will require descriptions aimed at helping drivers reach a more informed decision about their suitability for a particular vehicle.

For the first time, key information on rolling resistance, noise and minimum safety standards will be rated between A for best and G for worst on labels that will make it easy to identify performance.

The Government is expected to make it obligatory for tyre dealers to adopt a standard format to explain differences when the labelling law comes into effect on November 1, 2012. Re-treaded tyres, off-road professional tyres and racing tyres will not be included in the scheme.

“We welcome this move. Maximum levels of rolling resistance and noise will be imposed as well as minimum levels of wet grip. It should make tyre purchase as simple as buying a new fridge,” says Michelin spokesman Peter Snelling.

“We produce greener tyres and will never compromise on safety and believe the use of innovative technologies is the only way to optimise the key tyre characteristics at the same time.”

Goodyear Dunlop spokesman James Bailey agrees: “The aim of this new legislation is to influence consumers to buy more energy efficient and safer tyres. As they are the only contact area with the road surface, tyres play a key role in braking performance and their rolling resistance directly impacts fuel consumption and emissions.

“Having a labelling system is going to be a great help and will also drive home the point that you only get the level of performance that you pay for.”

“Safety should be the top priority and fleets should also remember that premium covers are likely to return improved economy as well as having a longer service life,” he says.

Tyres account for almost a fifth of the energy needed to drive a car with an internal combustion engine. For vehicles driven by electricity, the loss rises to 30%, so it’s small wonder that energy-saving technology is playing an increasingly significant role in cutting fuel use.

Over the past 30 years, Michelin claims to have reduced tyre-related fuel consumption by half while improving performance in key areas such as safety and longevity.

The company has pledged to repeat that feat over the next three decades and the fourth generation of its energy saver has already made an impressive start. It is credited with reducing fuel consumption across Europe by around 100 million litres.

“Bend a pencil rubber a few times and it heats up. The same thing happens from the movement and vibrations as the contact patch of a tyre touches the road surface,” product marketing manager Steve Dolby told Fleet News.

“Our object is to develop compounds that heat up less. The key lies in the mix of compounds as well as using the latest generation of silicon and other components.
“The clever use of compounds and the latest materials allows us to achieve both aims at the same time.”

Energy saver’s rival from Goodyear – EfficientGrip – was also tested by the TÜV organisation in Germany.

“We put a lot of work into developing a new compound and a new type of tread pattern because we were unwilling to compromise on wet weather grip in any way,” said Goodyear Dunlop spokesman James Bailey. “The key message is that in producing a fuel saving tyre, you don’t have to compromise on safety – and that’s not always been the case in the past.”

Longevity is another key performance area for fleets, according to Dolby. “Longer life means less tyres per contract. We estimate the average life for our covers is 28,000 miles, but this can be considerably more on vehicles in regular motorway use,” he says.

“The fuel-saving benefits are often hard to measure in fleet use because of different driving conditions and different types of journeys. But lower rolling resistance will always generate some level of saving and this is our standard offer – fitting energy-savers adds no additional cost.”

Replacement tyres represent a major concern for contract hire and leasing companies. "The amount of money they cost is difficult to build into our rates because it is impossible to estimate how long they last," says Hitachi Capital fleet services manager Malcolm Roberts.

But an annual spend of £2.5 million on tyres means replacements are a big issue.

"Tyres represent 30% of the budget we set for maintenance, servicing and replacements, but identifying the cover with the longest service life is a nightmare. We have a lot of data, but a diverse mixture of vehicles and drivers make analysing it difficult, to say the least.

Hitachi decided to place all its tyre business with a single premium brand several years ago.

"We chose Michelin because It is recognised for longevity and has a great track record in energy saving. In addition, it is a strong brand, which is important with drivers. We’d get a lot of adverse feedback if we fitted second grade tyres," Roberts said.

"No matter what size of fleet you run, fuel costs account for one of the highest areas of expenditure – so fuel saving is at the heart of our efforts to reduce costs," says
Chiltern Transport Consortium head Ian Godophin.

Responsible for overseeing the fleets across 4,500 square miles of Buckinghamshire, Oxfordshire, Bedfordshire, Hertfordshire and Berkshire, the consortium
operates more than 2,300 vehicles.

The vehicles cover annual distances of around 35 million miles and use about £7 million worth of fuel each year.

"We have been impressed with the performance of the Efficient- Grip, which helps deliver fuel savings while also offering high mileage and excellent wet braking performance," says Godolphin.