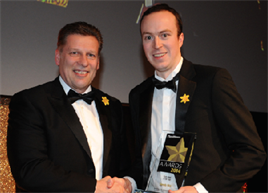 It’s fair to say that 2014 has been a particularly rewarding year for the fleet team at Speedy Services.

It has picked up four prominent awards – safe fleet of the year at the Fleet News Awards in March, business services fleet and safe fleet at the Fleet Van Awards in September and the safe vehicles award from Brake in June.

It is clear the company takes safety incredibly seriously. In part, it’s been led by the construction industry in which Speedy mainly works, although a passion for constant improvement has taken this to the next level.

Mark Woodworth, logistics development manager, explains the developments that helped the company rack up the gongs.

Fleet News: Where did the drive for safety in Speedy come from?
Mark Woodworth: Working in the hire industry, our main priority is keeping things safe, whether it be people in the office, our staff out and about, or our equipment. ‘If it isn’t safe, don’t do it’, is a key message which comes from the top of the company right down to each depot.

The sort of kit we operate could be incredibly dangerous and the last thing we want is for anyone to be injured.

We don’t just look at the Fleet Operator Recognition Scheme and Crossrail safety specification schemes for London. If London is going that way, it’s for a reason. There may not be as many cyclists in other areas but, if there is one, we certainly don’t want to injure them.

FN: When did you begin implementing additional safety equipment on your vehicles?
MW: The first ladder lock systems were fitted on to our vehicles in 2007 to keep staging boards and ladders secured. Once that had worked and been implemented on all our vehicles, we then worked with our bodybuilders to make it part of the fit-out process.

What was originally something designed just for Speedy is now used all over the hire industry. At the same time, we also put gates on the tail lifts to protect our staff. Again, they’re now industry standard.

We’re now putting multi-directional cameras on many of our vehicles.

FN: What do you do if one of your drivers is involved in an incident?
MW: We’ve been lucky in that we actually have very few large-scale accidents. We do, however, have a number of hit-post type incidents because of the size of the vehicles, and the types of sites we visit, particularly when working on enclosed building sites and new-build housing estates.
We have a post-accident review group, which reviews every single accident that takes place across Speedy and sits every Monday afternoon.

Even windscreen damage is recorded and we will look at each case individually. It’s incredibly worthwhile.

FN: What does your driver training programme involve?

MW: Every employee who drives takes part in the Driver Risk Index programme, set up by the Royal Society for the Prevention of Accidents.

We want everyone to undertake it regularly, but we ask a driver to take the programme after an accident or if they’re new to the company.

We’ll then look at that result and put the person through the relevant training. That course may be half-an-hour in the vehicle with someone from our training academy or, for more serious cases, someone from the academy or RoSPA will sit with the driver for a day.

If a driver is still a risk after training, we consider removing them from vehicles altogether. We can’t have someone out on the roads who is unsafe with the risk of injuring someone. Driving should be one of the lowest risks in our business, but that’s not often the case.

FN: How does telematics link into your driver training programme?

MW: Every depot gets a weekly scorecard and there are a few things we look for. We look at movement outside of hours, depot miles per gallon, driver miles per gallon, and driver speeding (which is monitored in percentage terms). If any driver is speeding at more than 30% above the limit, they go straight on to our speed awareness training.

Speeding instances have reduced from 50,000 to 7,000 a week, and the majority of those are now in the lowest severity category.

FN: You run your own speed awareness course – how does it compare to the police offering?
MW: I’d like to say it’s very similar. Our course is very much tailored to a commercial market and to the trucks and vans that our drivers use. For example, if it takes 15 metres to stop in a car, it’s going to take much further in a van or a truck.

If our speeding data can feed into the training course, then it makes the process consistent.
It removes harshness or leniency that centre managers may have towards any drivers.

FN: How has the camera fitment made a difference to your fleet?

MW: It’s ultimately for accident prevention. We now have four-way cameras on every truck, regardless of size or location. Forty vans in London operate with front-facing cameras, and the number is growing.

We’re going to trial the four-way system on vans, as our drivers have told us they prefer driving the larger trucks because they like having the cameras.

In the cab, the screen sits where the rear-view mirror would in a car. It’s off when driving normally and activates when the driver indicates or goes into reverse gear – for example, when you put your left-hand indicator on, images from the left-side camera appears on the screen so if there’s anything down there – a vulnerable road user, post or car – you’re not going to hit it because you can see it.
The screen is not in the direct line of sight, so it’s useful while not being distracting.

FN: Are your drivers involved in the safety development process?
MW: Absolutely. One of our drivers suggested adding a camera to the top of a truck cab to act as a blind-side reversing camera. We’re trialling this and so far it’s been brilliant; we’re looking to roll it out to other vehicles.

We’ve also had other suggestions that aren’t strictly vehicle related, but are still fantastic ideas.

One driver stopped at night after an accident and realised that if he wasn’t wearing his hi-vis site jacket, he was invisible. He suggested we add reflective strips to the standard uniform – a simple change that means our employees are always visible. A driver won’t want to walk around a service station in hi-vis, but with reflective material on a fleece he can always be seen.

We’re always looking at tweaks that mean we can keep our staff safer than they already are.
In London, our drivers are telling us they’re concerned about cyclists.

The risks for cyclists with vans are fewer, but if our drivers are concerned, we want to react. We’re currently working on a demonstration vehicle with our Ford dealer, Gordons of Bolton, which will have a side-alert system. The scanner bar sits along the side of the vehicle, and goes off if there is anything in the vicinity.