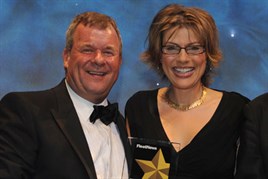 FN: The B-max, which is available in September, is the first UK model to feature your Sync technology. How far can vehicle interactivity go, particularly with safety systems – might they inform the fleet manager of near- misses in future?

KG: This first level of Sync responds to text messages through voice, dials the emergency services in the event of an accident and starts a new level of interactivity that will roll through to the Focus and other models.

The technology on safety systems, such as emergency braking, is loggable and could be transferred to the fleet manager but there are issues with affordability and there is little demand for this now.

The jury’s out on the spy in the cab. I’ve not seen a big take-up outside of the CV market and there is a big question about what you have to do as a fleet manager if you have this information.

However, we have had discussions about electronic technology for the Transit – for example, City Stop and lane departure warning.

There’s quite a bit of interest; it comes down to affordability but it could be made available to customers if they want it.

FN: There’s been a lot of criticism over the official fuel consumption figures. How are fleets reacting to this?

KG: Cost of fuel is paramount to fleets. We are increasingly seeing fleets do their own real-world testing of mpg before they commit to a vehicle, so they want demonstrators for longer to allow this testing.

We need to make sure what we say on the tin after homologation is accurate – and we believe we are.

FN: The next-generation Transit doesn’t require a full service until 30,000 miles. Isn’t this risky for fleets?

KG: Feedback from fleets is that it is desirable for an annual check on safety-related items such as brakes and tyre wear.

We are talking to fleets about a tailored support service, especially on vans – effectively an interim service with duty of care in mind. But we don’t want to add additional cost or downtime so we have to ensure we and the dealer can facilitate an interim service that is less than an hour.