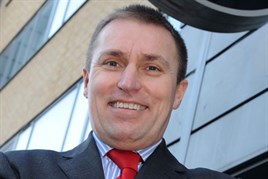 Early indications are that the cars are “impractical” and can’t do anywhere near the same volume of work as the Galaxy.

But Griffin believes “it is an experiment that is worth trying”.

Wickens agrees: “We are doing the trial because we want to know what the future holds for electric in London.

“The Leaf is a great car but the problem with electric vehicles in a minicab fleet is that some of our cars do 40,000 miles a year which means the electric vehicle would only last two years.

“There is enough room but ideally you want a bigger vehicle; customers are used to having a people carrier.”

Addison Lee’s next project is participating in the Wireless Electric Vehicle Charging (WEVC) trial in London.
Wickens is also keen to trial other alternatively-fuelled vehicles, including biogas, hydrogen and range-extenders.

“We want to test all sorts of things to see what fits the industry,” he says.

A new two-year deal has been struck with Ford with the first batch of the 1,600 Ford Galaxys being delivered later this month.

Addison Lee switched from the Volkswagen Sharan to the Ford Galaxy in 2008.

Daniels says it was “a cost-effective decision”.

“We’ve been selling the Galaxy for about a year now and the residual value has proved strong,” he says.

Griffin adds: “Ford has proved to be a very good partner in helping us with the logistics of the fleet movements.

“It put all of our wiring looms and technology into the cars as part of the pre-delivery inspection and organise for it to go to the PCO for inspection so when it delivers the car it’s ready to go.”

Addison Lee does not own or lease its fleet.

Instead, the company’s chairman, John Griffin, and CEO, Daryl Foster, own Eventech, which buys the vehicles and rents them directly to the self-employed taxi drivers.

The Addison Lee brand sits in the middle as the front-facing taxi service which manages the drivers and handles the customers.

Eventech purchases the vehicles using asset finance and is responsible for servicing/maintaining and disposal, under the charge of Rob Daniels.

Eventech has now taken on the Lewis Day vehicle fleet, after buying it from the leasing company.

The Lewis Day passenger car brand, customer contracts and goodwill was acquired by Addison Lee, although the deal is currently being investigated by OFT to see whether it warrants referral to the Competition Commission.