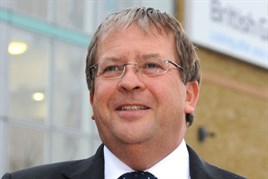 After 14 years of funding its vans on an operating lease, British Gas took the decision to switch to outright purchase in 2012.

It is one of a growing number of large fleets to buy vehicles outright, echoing the move by Network Rail which was documented in the December 6, 2012, issue of Fleet News.

It was no snap decision: British Gas fleet manager Colin Marriott says it was five months in the planning and it capped a particularly challenging 12 months for the fleet, which faced some tough CO2 targets and a growing focus on safety.

The utilities company has a fleet of 13,000 vans and 2,500 cars (which remain on contract hire). It’s the third biggest in the country and travels 160 million miles a year.

Any change of funding method for a fleet of this size has major implications and Marriott admits the decision to move to outright purchase was a major one.

“Assessing what is the right financial approach in a big business like ours is a huge decision,” he says. “As it is today, outright purchase is the best thing for us.”

Marriott expects to make a sizeable annual saving as a direct result of changing the funding method.

It will also give him greater flexibility over operating cycles and more control when setting residual values.

The commercial fleet, in particular, has seen a significant uplift in residual values in recent years and this was a contributing factor towards the move to outright purchase.

“Our vans have a tremendous following in the second-hand market, which means their RVs are very good,” says Marriott, who has been in his current role for the past 10 years.

“We have a very detailed total cost of ownership model that we have used to slowly start extending the life of the vehicles.”

Drivers can pay extra to shorten the term, but they have to pay the full total cost of ownership impact of making that choice, including National Insurance contributions. Fewer than 30% take this option.

For small vans, typically used in more rural areas where fewer miles are travelled, the standard replacement cycle is five years/60,000 miles; larger vans are five years/100,000 miles. Both have been extended from four years.

Last year, Marriott introduced a limited badge choice for the car fleet, reducing the 27 makes to just four for drivers who have a contractual right to a car. Job-need drivers – 55% of the total – are limited to a single make and model, the 99g/km CO2 Volkswagen Golf 1.6 TDI Bluemotion.