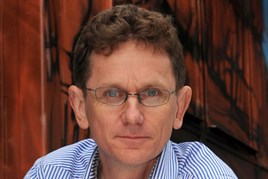 One minute it can be a human heart, the next a business critical contract. Welcome to the high octane world of a same-day delivery company.

CitySprint makes five million critical deliveries a year and with packages or parcels labelled the likes of ‘double-rush’, even the terminology leaves the uneducated in no doubt that this business is all about hitting deadlines.

It’s a pressurised environment and perhaps even more impressive when you consider its 2,000-strong, time-sensitive fleet of bicycles, motorbikes and vans all operate on a self-employed model.

As head of fleet and compliance at CitySprint, Baker’s route into fleet management has given him the perfect perspective on the courier industry.

In the 1980s, he was competing around the UK in the relatively new sport of mountain bike racing, sponsored by a Leeds-based bike shop.

But his love of two wheels in his leisure time was to transfer into his working day.

“It meant I could earn money and train at the same time, and because it was a self-employed role I could pick and choose when I wanted to work.”

He spent the next two years in the saddle and has spent the past 15 years in CitySprint’s fleet team, before taking over the reins 18 months ago.

The unassuming headquarters of the UK’s largest privately-owned same-day distribution network is not far from Liverpool Street station on the north-eastern edge of the City of London.

The business has been based in London since 1975 and at its current location since 1996, but don’t expect atriums filled with greenery, corporate coloured sofas and walls of glass and steel.

Baker takes me on a tour of a building which instead hums with the sound of operators co-ordinating deliveries, drivers checking in and out of the fleet office and customers requesting the next time-sensitive run.

There are 35 service centres based in cities across the UK, which together manage the 2,190 drivers and cyclists that work for the company.

Each service centre has its own core group of couriers, but as the GPS-tracked drivers move from one area to another, the local service centre may try to offer additional work.

Baker explains: “A courier who is going from London to Bristol will be contacted by our people in Heathrow as he travels along the M4.