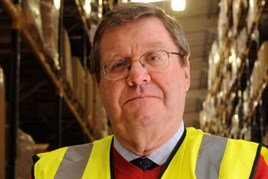 Euro Car Parts, Britain’s biggest distributor of parts for cars and light commercial vehicles, is planning to triple its annual turnover to more than £3 billion in the next five years.

It’s a far cry from the struggling car parts shop in Willesden, north London, which Sukhpal Singh Ahluwalia bought in 1978.

It operates a fleet of more than 1,900 vans and 240 cars, bolstered by the recent acquisition of a paint company.

“Our fleet is the backbone of our business and it’s imperative that it runs as cost effectively as possible to ensure the continued
growth of the company and keep costs low for our customers,” says Singh.

That responsibility falls on the shoulders of transport manager Michael Skuse, who joined the company in September 2012.

He ran his first fleet in 1978 and over the past 36 years has managed fleets of 500 to 25,000 vehicles, including pan-European fleets, Middle Eastern fleets and global operations.

Before joining the business, Skuse was in a consultancy role, but tells Fleet News: “I wanted to get my teeth into a new challenge.”

He heads a five-strong fleet team, which is based at the company’s headquarters in Wembley. Roles are clearly defined, with one of the fleet team looking after maintenance requests, another responsible for accident management, one handles fleet-related invoices and the remaining member takes charge of fines and vehicle deliveries.

Three national distribution centres keep the 13 regional hubs stocked, which in turn deliver to the 140-plus branches located across the country.

However, a large proportion of the day-to-day management of the fleet is handled at branch level.

Skuse says: “As each new branch is opened it gets allocated seven vans, six of which will be a car-derived van.

“As the branch grows, according to turnover and margin, an extra van will be added up to, for example, Glasgow which has 35 vans – the biggest fleet we have at branch level.”

Three people at the branch have key fleet responsibilities.

The branch manager has an overview of the fleet, while the operations manager is responsible for picking, packing and ensuring the vans are serviced and maintained, while a driver controller allocates each job.

They are then responsible for meeting time critical customer deliveries, with customers coded into delivery runs of 30, 45 or
60 minutes.