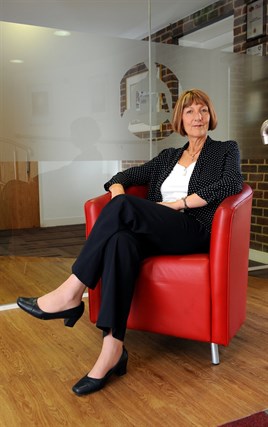 Liz Hollands had a hasty introduction to fleet management.

“I was given two lever arch files and a spreadsheet and told to get on with it,” she says.

That was in 1993 when she was working as an office manager at property services provider DTZ.

The company had been formed following the merger of Bernard Thorpe and Partners and Debenham, Tewson & Chinnocks, and needed someone to take responsibility for merging the companies’ fleets.

“They knew I was a petrol head – I raced motorbikes in the mid-1990s – and they basically said ‘we need someone to run our car fleet, would you like to do it?’. I inherited 350 cars from two separate companies. They were being run completely separately – one bought its cars outright, the other used contract hire. There were different grades, different insurers, different everything really, and I had to work out what was going on.”

Hollands got to grips with fleet management by reading Fleet News and becoming a member of ACFO. She was an ACFO director from 2006 to 2010 and is currently chairman of the southern region.

“ACFO has been a real help in terms of meeting other fleet managers, learning how they do things and working together on the wrangles,” Hollands says.

Her training has all been ‘on the job’. “Now I would always recommend that someone new to fleet management does take the official training because the one thing I notice from people who have done training, particularly the ICFM diploma, is that they are extremely confident and strategic in their thinking – which is what it takes,” she says.

Hollands admits that when she first assumed fleet responsibility it was “very much administration and letting things roll along rather than the cost saving and procurement lines that are followed now”.

During her 21 years in fleet, the role has become “much more strategic” because “we can outsource so much of it”.

But there is a risk that outsourcing can be taken too far. Without a fleet manager, Hollands believes companies may “lose sight of the extreme costs that are involved in running a fleet”.

“It’s the second or third highest cost in most companies, after salaries and pensions, so there is a huge amount of money and background work involved,” she says. “Companies think they can do without a fleet manager or they can have someone doing it as a temporary role, but I think they’ll lose money as a result of it.”

Hollands’s career at DTZ came to an end in 2010 as a result of outsourcing.

“With good fleet contacts I was lucky enough to hear about an upcoming fleet role at Freight Transport Association,” she says. “The only snag was that I had to do facilities as well as fleet, which requires running four premises, totalling around 35,000 square feet.

“One of my first jobs was to sell the office premises we owned, which was a Georgian house in Stirling, and lease the new modern office premises, so that was being flung in at the deep end from doing solely car fleet. But I loved it.”

Hollands spends about 75% of her time on facilities “purely because of the amount of buildings we have around the UK and the fact that something is always happening in one of them so that tends to be more of a reactive job”.

“Tunbridge Wells is quite a challenging building in itself,” she adds. “It’s a 1930s former Christian science church.”