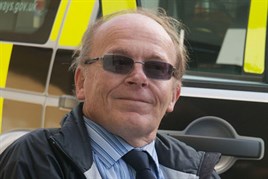 Adapting to Government spending cuts while managing the road network during the biggest sporting event ever to take place in the UK has placed a spotlight on the Highways Agency and the work of Alan Rowley, project sponsor, traffic management directorate.

The new government procurement programme has helped the agency to meet its tough budgets, while forward planning and the reallocation of resources ensured few issues occured during the Olympics.

Under the procurement programme, purchases are centralised across all participants which increases buying power.

Vehicle needs go out to tender through an e-auction, and the lowest bidding manufacturer wins the contract based on purchase price only.

Once the manufacturer has won the bid for the vehicles, another e-auction is then set up for the funding provider.

Despite Rowley’s initial reservations, which centred around concerns about loss of control, particularly over vehicle choice, the scheme has proved a significant cost saver.

“It was difficult to get on board in the beginning because the choice and control is taken away from the fleet manager,” says Rowley.

“But it’s working. It’s taken some managing and was something we were dead against initially, but the savings have been substantial.”

Mitsubishi won the contract on a recent bid for 50 vehicles and Lex Autolease won the funding auction.

To help combat the rising cost of fuel, the agency has worked on a number of projects to reduce mileage and improve vehicle utilisation.

“By looking more at our routes and reducing mileage, we are combating the rising cost of fuel. We have achieved this mainly by managing the routes and drivers taking more care about the length of time they are out on the road,” says Rowley.

It is having a significant impact: last year the Highways Agency used two million litres of fuel, a 400,000-litre reduction on 2010.

It has achieved this by analysing historical data about road traffic crashes and breakdowns to enable its traffic officers to park up close to areas prone to incidents.