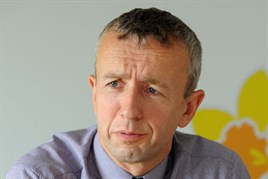 The strategy driving fleet policy at cancer charity Marie Curie is a simple one: minimise operating costs to allow the organisation to spend the maximum amount of money helping people with cancer.

Marie Curie has a solid foundation from which to build.

Its employee base of fundraisers and nurses tends to be more mature in age and outlook which means common fleet issues such as excessive wear and tear, speeding and accident damage are at a much smaller scale.

All cars are business-need – it’s no surprise that the charity does not have a perk fleet.

And while much of the mileage is essential to the job, fleet manager Jeremy Sothcott has been implementing a number of initiatives designed to reduce the annual fuel bill.

“We use supermarkets all the time which saves us several thousand pounds a year,” Sothcott says.

He is also looking at how the use of supermarket points might benefit Marie Curie by pooling them and using them for charitable purposes.

“We encourage video technology and Skype-type technology which has reduced mileage. We also question whether people need to have the meetings and encourage train journeys.”

A coherent travel planning strategy will become easier to achieve in the coming weeks as Sothcott adds all elements of travel, such as plane and train, to his job responsibilities as an expansion of his current role.

More recently he has introduced league tables to show which departments are using the most expensive fuel from an average pence per litre cost. This should see the averages reduce.

Sothcott manages a fleet of 170 cars and 10 light commercials, a mix of vans and minibuses.

The fleet is highly restricted to five-door diesels supplied by Peugeot and Citroën – 208, 308, 308 SW, C3 Picasso and C4 VTR. “The cars are all bog standard; there are no extras,” he says.

The fleet has always been dual brand although Sothcott has dabbled with other makes.

However, he ditched Skoda when it was unable to supply basic specification cars within an acceptable time frame and parted with Renault after its prices increased at the same time as manufacturer support reduced.

“We’re always talking to manufacturers to see if there’s a deal to be had,” he says. “We have also looked at reducing from two brands to one, but there weren’t any more savings and we like to give people some choice.”

CO2 emissions and fuel consumption are key considerations – the fleet average is 118g/km for cars and vans combined; 110g/km for cars only – but the final decision always comes down to wholelife cost.