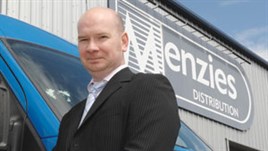 Switching its vehicle acquisition policy from a lease-rate measurement to wholelife cost is saving Menzies Distribution thousands of pounds each year.

The decision, taken three years ago, saw the newspaper and magazine distributor re-tender for both cars and vans at the end of 2010, resulting in different suppliers for each.

For cars, out went Vauxhall and Saab; in came Ford and BMW. Result: “Like-for-like we are 5% better off on the deal we negotiated three years ago,” says transport and logistics manager Allan Hughes.

Although there was “very little in it” between Ford and Vauxhall on the wholelife cost calculations, EfficientDynamics gave BMW a clear advantage over Saab on fuel costs.

For vans, out went Vauxhall; in came Ford. Result: fuel savings of 8% thanks to a combined consumption improvement of 2mpg.

As the business purchases around four million litres of fuel a year, this converts into a substantial uplift on the bottom line. In addition, the monthly rentals are 7-8% lower on the Ford Transits.

“We lease all our vehicles so we weighed up the discount from the manufacturer, the mpg and the payload,” says Hughes.

“We also need to have the capacity to carry in bulk to newsagents. Monthly rental and mpgs were key costings, but we also took lifecycle costings into consideration.

“We mapped our existing vehicles against the vehicles we were testing, and we continue to do this on a regular basis.

"We are always looking at forthcoming vehicles and how they might fit within the fleet.”
The van fleet also switched from rear-wheel to front-wheel drive, which Hughes says gives better performance in snow as well as offering additional fuel savings.

Fleet and transport managers are usually sat at their desk during the hours when their fleet is operational – principally between 8am and 6pm. Not so Hughes.

His 290 vans and logistics fleet of 240 HGVs start work at 2am delivering publications hot off the press to newsagents across the country. They finish work at 9-10am and then sit idle.

This enables him to neatly side-step one of the issues facing many fleet managers – phone calls from drivers on any number of relatively trifling matters.

Instead, he can dedicate all his working day to strategic matters, dealing with procurement, legislation, safety and cost issues.

Any problems with the fleet or deliveries during the small hours are dealt with by a night manager or supervisor – every branch has one.

Meanwhile, enquiries from the daytime-operating 250-strong car fleet are fed directly to the leasing company.

One big advantage of having a night-time van fleet is that any maintenance or repair work can be carried out during the day. Downtime is therefore greatly reduced.

Two years ago Menzies had 450 vehicles; now it has 540 cars and vans. Most of the growth has been on the van fleet due to business acquisitions: it now delivers 7.4 million copies of newspapers and magazines to around 25,000 UK/Ireland retailers 364 days a year.

Time – to think, plan and manage – is one of the main reasons why Hughes has been able to handle the rapid growth with no negative impact on operational efficiency.

Long-term rental provides the solution, although some branches have converted vehicles into leased vans. It’s their decision, but the capital expenditure has to be justified.

Justification of spend courses throughout the fleet operation; much of Hughes’s strategic thinking is based around reducing cost.

Key to efficiency is the Optrak vehicle routing, load planning and scheduling system which Menzies has used for the past 12 years. It measures weights and volumes, delivery times and locations of branches and customers, and vehicle types to optimise the best routes.

Full reassessments are carried out every year or two; additional audits are run when new business is won or where there have been notable changes in customer business, such as an increase in volume.

Optrak has enabled Menzies to take vehicles off the fleet and reduce the number of contractors it works with.

It has also reduced annual mileage, which has saved fuel. Including contractors, 1,750 vehicles are used every day, covering 123,000 miles on 2,000 set delivery routes.