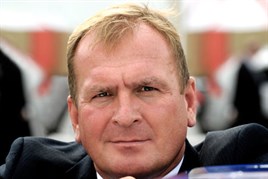 A new ‘super’ fleet will take to the roads in Scotland next year with the creation of a single police force. Tony Chalk will be at the helm.

However, he will continue supporting 1,185 vehicles for Strathclyde Police until the role becomes full-time from April 2013, when the new force becomes operational.

“There’s a lot of hard work been done over the past few years to get us to this point and there’s a lot of work still to be done, but I’m looking forward to next April,” Chalk told Fleet News days after starting his interim role.

“Most of my career has been spent working towards this moment and, even though we still have to to get the single force up and running, it’s a fantastic opportunity for me and the rest of the fleet team.”

The amalgamation of the existing eight Scottish police forces and the Scottish Police Service Authority, which manages a range of back office functions and operates 300 vehicles, follows the publication of the Police and Fire Reform (Scotland) Bill.

Information published with the Bill reveal estimated savings in vehicles alone totalling some £8.41 million by March 31, 2026 (Fleet News, March 1). However, this could be a prudent forecast.

“You would anticipate a 5-10% reduction in fleet numbers, giving cost savings in the region of £5 million a year,” says Chalk.

“But we will have to wait for the individual fleet reviews being conducted by the existing forces to see what a new combined fleet will look like.”

The new Police Service of Scotland will operate the second largest police fleet in the UK, behind the Metropolitan Police Service’s 4,000 vehicles.

Chalk predicts ‘quick wins’ in terms of vehicle standardisation, parts and servicing. “We expect big savings in all these areas,” he says.

The removal of existing decals and their replacement with the new single force design is expected to be completed within the next three to six months.