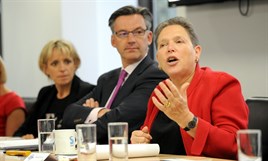 Fleet operators have a "huge role" to play in the uptake of ultra low emission vehicles (ULEVs), according to Baroness Kramer (pictured), Minister of State for Transport, who was speaking at a recent round table, sponsored by the ‘Go Ultra Low’ campaign.

The jointly-funded industry/Government campaign is backed by manufacturers BMW, Nissan, Renault, Toyota and Vauxhall, the Office for Low Emission Vehicles (OLEV), and the Society of Motor Manufacturers and Traders (SMMT), to encourage the uptake of vehicles which produce 75g/km or less of CO2.

Baroness Kramer said: “Fleets play a huge role because they involve a large number of the vehicles on the road but also because they are real trendsetters.

“As manufacturers develop the various different capabilities for ultra low emission vehicles input from the fleet industry at this critical time can help. As we design the infrastructure and support the infrastructure that input can also help us in making sure we try and get that right.”

She also suggested that Government “needs to put its money where its mouth is” with a £5 million programme to get ULEVs into Government fleets.

“I intend that to include people who sit in important Government positions as well as our much wider and more general fleet,” she said.

A number of you are running electric vehicles. What are you experiences?

Adam Davies: We have to get people to forward-plan. They have to think where they are going, whether they have got enough range to get them there and back. Is there somewhere they can stop on the way back? We had a driver who thought he was going to run out of charge. He phoned us up and refused to drive back. We went and dropped a car off for him and got back before him in the electric vehicle.

Paul Taylor: We put one on trial over four weeks, we tried to get as many people as possible to use it while they were working. We got some feedback forms and there were no negative comments - everyone was impressed with its performance. Having said that, it was within a confined site - you can’t physically go that far, it will always come back to its charge point.

Neil Shaw: We’ve been running some electric commercial vehicles over the past three years and from a commercial operator point of view there are a lot of challenges around range anxiety, payload and weight. With a diesel van our drops per vehicle are 40% more, plus you can continue to use the vehicle so you’re maintaining efficiency using less vehicles. With the electric vans we’ll probably get a route out of them.

Adam Davies: The questions I get are ‘What network is it on?’ What card do I need? What map is it on?’ So we need some way of accessing a map and accessing a charging card because I know of certain drivers that drive round with three or four cards on them just so that they can charge at various sites when they’re doing a journey, that’s not sustainable.

Jonathan Mitchell: Every new publicly-funded charge point is pay-as-you-go accessible. You turn up, use it and there is no need to carry round dozens of smartcards.

Monica Guise: Is there any regulation around the charging infrastructure - are there some set rates by the Government?

Jonathan Mitchell: Public charging competes against people who can charge up at home using an off-peak tariff for next to nothing so market forces would tend to suggest public charting wouldn’t be able to charge unreasonable rates. There is nothing in place at the moment for the Government to start getting involved in that.

What interest have you seen from company car drivers in ULEVs?

Paul Taylor: A quite broad section of our car drivers are interested in low emission vehicles. I probably get 20 to 30 calls a month from people whose car is due for change asking why is this not on the list?

Jo Hammonds: The fact that the question is there shows there is becoming a demand for those cars and there is not the stigma around them that they’re used to be. But our car drivers tend to be polarised. Some say ‘I’m allowed a two-litre car and that’s what I’m going to drive’. Others look at their pennies and their tax and they are the ones that I don’t even have to convince to take a ULEV.

Paul Taylor: the only problem I foresee when I’ve got a number of those type of cars on the fleet is when somebody leaves it’s then reallocated and it’s getting someone to take it.

Jo Hammonds: And that for a lot of big fleets is why we limit choice so heavily. If you’ve got a pink one over here and someone wants a blue one it’s very difficult to place but if they’re all green then it’s very easy to say you’re having another green one. I know it’s simplistic but it’s an easy way of dealing with a problem that comes about in a larger fleet. I fear if you put a few of the electric vehicles on or range extenders all of a sudden trying to give one to someone who doesn’t want it becomes more of an issue.

Do you use a wholelife cost approach when you put electric vehicles on your choice list?

Paul Taylor: Every vehicle that hits our fleet is done on a wholelife cost basis. I would do no different with an electric vehicle. Providing our lease partner is prepared to do it and I can get the wholelife costs to stack up, there is no reason why it shouldn’t be on the list.

Jo Hammonds: We’re exactly the same. Wholelife cost is the way we buy our vehicles. Outlay upfront for us doesn’t become a problem because we’re a sizeable fleet. I can certainly understand for a smaller fleet that investment of a more expensive product upfront can be more difficult for a smaller company to manage.