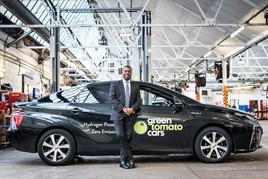 The London-based private hire company took its first two Mirai models in 2015 and increased its fleet of FCEVs to 27 in 2018 under the pan-European Zefer project (see below).

It has just added another 25 to its 600-strong low emission fleet under the programme.

Before taking on the latest batch of FCEVs, its 27 Mirai cars had travelled one million miles, carrying 80,000 passengers, with each vehicle saving more than four times its own weight in CO2, equivalent to 7.6 tonnes per car.

“So far, the trial has shown than Mirai FCEVs are operating effectively as zero tailpipe emission taxis in London, requiring only very minor operational adjustments,” says Peter Speers, principal technical specialist at Cenex, which is a partner in the Zefer initiative.

He says one of the issues with FCEV uptake is that their upfront cost is considerably higher than for a comparable diesel: the Mirai, for example, has a P11D price of £65,945.

However, financial support through the Zefer project and the Office for Low Emission Vehicles (OLEV) has lowered Green Tomato Cars’s monthly lease payments to between £300 and £350 over a four-year/100,000-mile replacement cycle. This is comparable to an internal combustion engine (ICE) vehicle, says Speers.

The vehicles are serviced every 10,000 miles and running costs have been similar to those of a Toyota Prius.

Speers says that in return for the financial support from government bodies, Green Tomato Cars pays for all the fuel and devotes time to promoting the vehicles and overcoming the issues to integrate them into its operations.

“The drivers have been trained to be ambassadors for the vehicles. When people get in a hydrogen taxi, they are often really interested in what it is and why it is different from a conventional or an electric taxi. So, the drivers are able to promote the vehicles as well as drive them as economically as possible.

“In practice, this has worked quite well. In 18 months there have only been four incidents when a vehicle has actually run out of fuel and had to be rescued, so, considering they’ve driven one million miles, that’s not bad.”

Green Tomato Cars has had to make only “minimal” adjustments to incorporate the FCEVs into its daily operations.

“Clearly it is best if the vehicle stays within a reasonable reach of the refuelling network,” says Speers.

“The majority of refuelling stations are in London and Green Tomato Cars’s dispatching software ensures that, effectively, their calls are limited to within 10 miles of the M25. In practice that has not been a big issue, as 96% of the journeys are already within the M25 or just outside.”

The limited refuelling infrastructure – there are five stations in London – and issues such as no hydrogen being available or stations being unavailable through either being upgraded or maintained, has combined with driver unfamiliarity with the technology to cause them to refuel more often than they need to.

“The data shows they can drive 312 miles on a tank of hydrogen, which means they only have to refuel every three days or so, but the average amount refuelled is about 2.2kg,” says Speers.

“That’s less than half the tank’s 5kg capacity and that is lower than we see from other hydrogen vehicle trials.

“Drivers were often refuelling every day because they have got a slight concern about the limited nature of the refuelling network. But, of course, the more the drivers are refuelling, the less time they have to earn money.

“However, there are some things being done in terms of this excessive refuelling. The refuelling station provider (ITM Power) sent out some info packs to drivers and operators to show that where there had been station downtime incidents, they were very short-lived and that the other stations in the network were operational and that gave the drivers some reassurance.

“ITM Power has now developed and released an app to the drivers which shows real-time whether the station is working and if it’s got hydrogen, and that’s had a big influence.”

Speers says Green Tomato Cars has also changed the Mirai drivers’ conditions of employment from contracted to self-employed to incentivise them to increase hourly productivity and minimise unnecessary trips to refuel.

The changes were introduced in February/early March, and since then there has been a change in the behaviour of the drivers.

“They are refuelling less frequently and so when they do refuel, they add more hydrogen to the tank, meaning that, on average, they are more productive,” adds Speers.

Under the trial, Green Tomato Cars is not aiming to make money out of the FCEVs, but is aiming for them to be profit neutral.

“Passengers are charged a small premium if they ask for a zero emission taxi when they call the private hire vehicle company or use its app,” adds Speers.

Driver attitudes to FCEVs will also be assessed to understand changes in attitudes, lessons learned and the impact
of the trial, which runs to September 2022.
It also aims to identify any barriers to widespread adoption of the technology.

As well as the 50 Toyota Mirai models on Green Tomato Cars’s fleet, Zefer is also contributing towards 10 vehicles for the Metropolitan Police.